WordPress Hosting: The Ultimate Guide to Choosing The Best Option

B.J. Keeton 135 Comments Reader Disclosure Disclosure: If you purchase something after clicking links in the post, we may receive a commission. Thank you for the support!

The single most asked question I see around the internet is some variation of What’s the best company for WordPress hosting? It’s nuts how often this comes up, but it shouldn’t be that surprising–there are so many options and choices out there, it’s almost impossible to not get bogged down.

In many ways, the hosting companies are similar. They can offer one-click installations, cPanel admin dashboards, add-on domains, and that sort of thing. But in many other ways, the hosts can be quite different, and those differences are what you should look into when choosing where your WordPress site lives.

One of the biggest choices you’ll have to make when deciding on a WordPress host is whether or not you want to go for an all-in-one managed hosting package, or if you want to go for the more traditional, shared/VPS/cloud option. Both options have their merits and pitfalls, so it will be entirely dependent on what you need.

Traditional hosts (or shared hosts) are set up to give you a section of a server. They partition off your area, and you can do what you want to with it, but like a subdivision in the real world, you have no choice of who your neighbors are, so if they’re doing shady things, your property value goes down (and becomes potentially damaged).

The trade-offs for that come in having bunches of control of your own area, often with hosting as many WP sites as you want for the same monthly cost, which is typically much lower than managed hosting. Because you handle the daily tasks and upkeep yourself.

The most well-known of these shared hosts are GoDaddy, BlueHost, HostGator, and Siteground.

Managed hosting, on the other hand, offers you a single place where your WordPress install lives. It is reserved for you and yours alone. Your neighbors are off living in their own gated communities, and you’re off living in yours. You get security, updates, support, and fantastically optimized speeds (often far faster and more reliable than shared hosts) all handled for you.

But you pay for it. Again like in the real world, living in a walled-off mansion by yourself comes with a cost. You don’t get to control things yourself, as updates are handled automatically, the number of WP installs can be limited–so can the particular plugins you’re allowed to use–and the price-tag is much, much higher on average than shared hosting (especially when looking at price vs number of installs).

While many hosting companies are moving into managed hosting these days, the old standbys are WPEngine, Flywheel, Kinsta, and Cloudways.

A Deeper Dive into Some Hosts

But that’s all top-down generalization. Each host has its own quirks, benefits, and solutions that may make all the difference for you. And that’s what I want to talk about. Because while you may read the above and realize you definitely need managed hosting (or vice versa), there’s still a big decision to be made when you look at which WordPress hosting company to go with.

I’ll be looking into some of the old standbys and newcomers to the WordPress hosting scene.

GoDaddy is the granddaddy (heh heh) of hosting companies. It’s the Walmart of web hosts. People know the name, they’ve probably shopped there at some point, and they probably have an opinion about it, too. That’s not good or bad. It just is what it is.

For WordPress hosting specifically, GoDaddy stays on brand. They mix their discounting and never-be-undersold mentality with the managed hosting philosophy of keeping focused on your singular product. 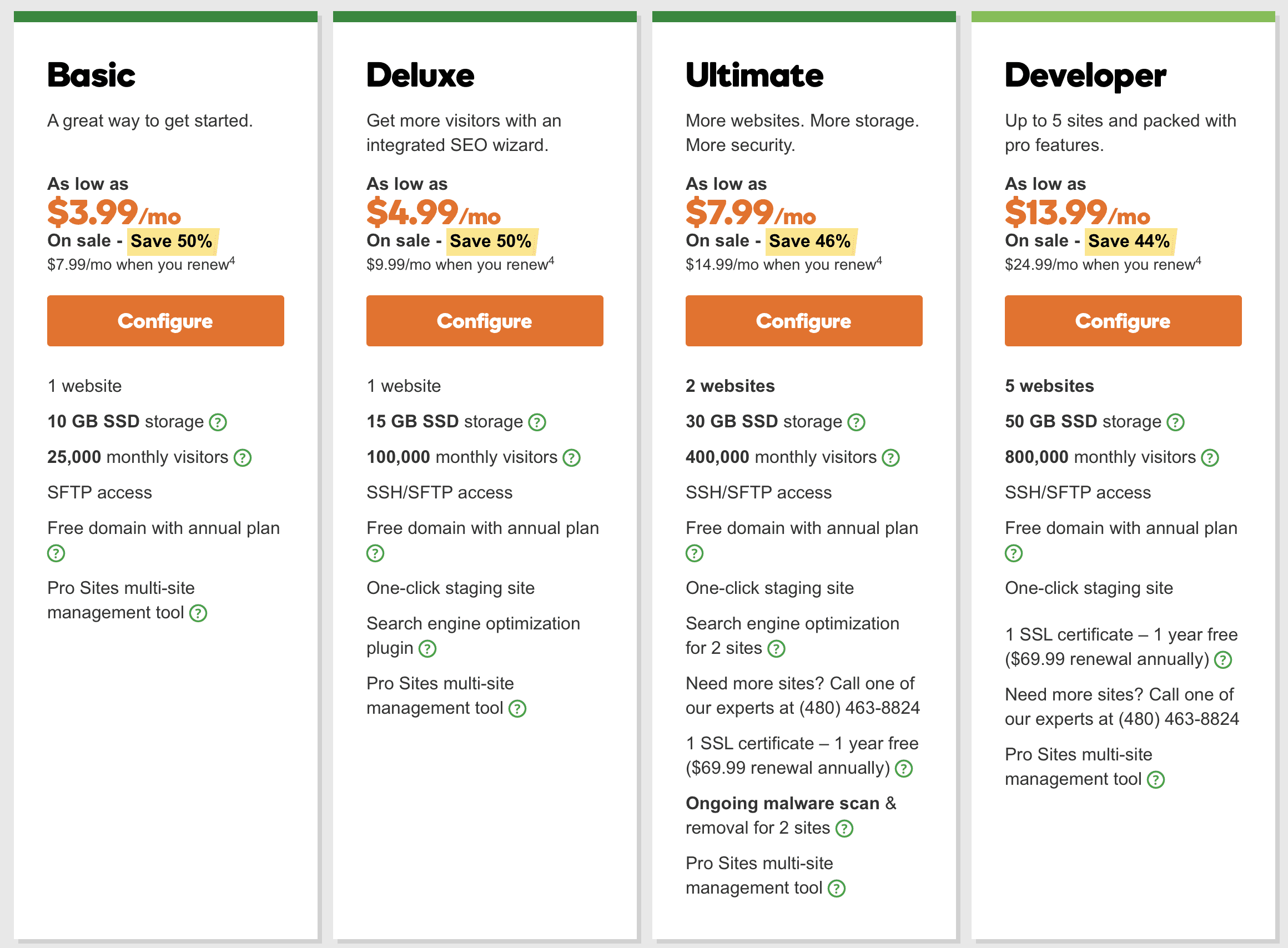 Digging in to GoDaddy

In the end, without releasing anything but the most basic tech specs, not being transparent about what they use to protect your site, and up-selling at every opportunity, GoDaddy doesn’t seem to be a realistic choice for anyone who has already been a WordPress user for a long time. Even among managed hosts, their offerings are spare. 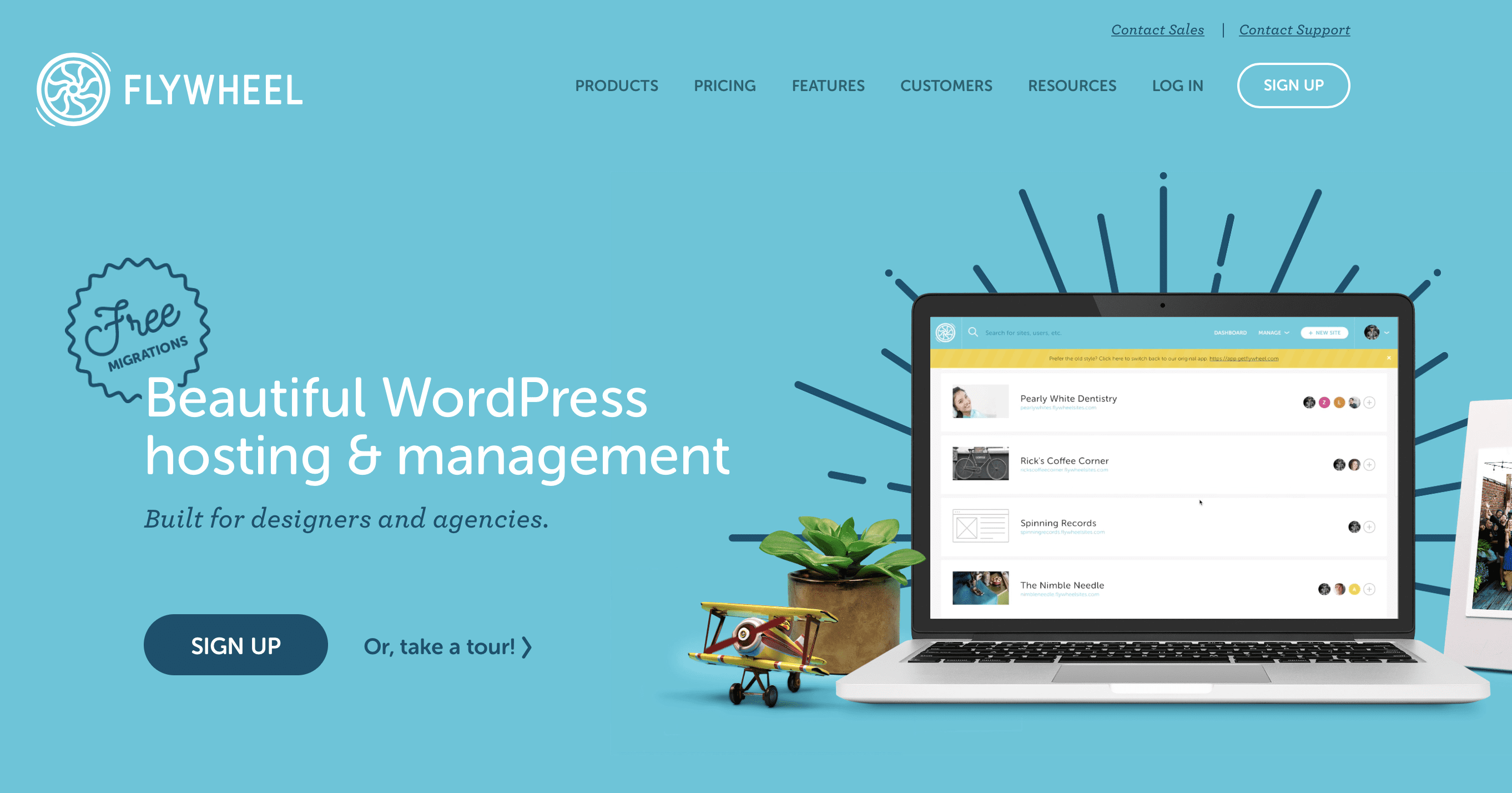 Flywheel is one of the big names in managed WordPress hosting. Focusing on seamless migrations, ease of use, and your peace of mind, they put everything out there for you in the beginning. Their focus is on UX, both for the site visitor and site owner.

Like other hosts, they do offer tiered pricing with various features walled-off by tier. They don’t offer a lot of tech specs, either, but their target demo consists of designers and agencies looking for a smooth transition from the dev team to the end user. 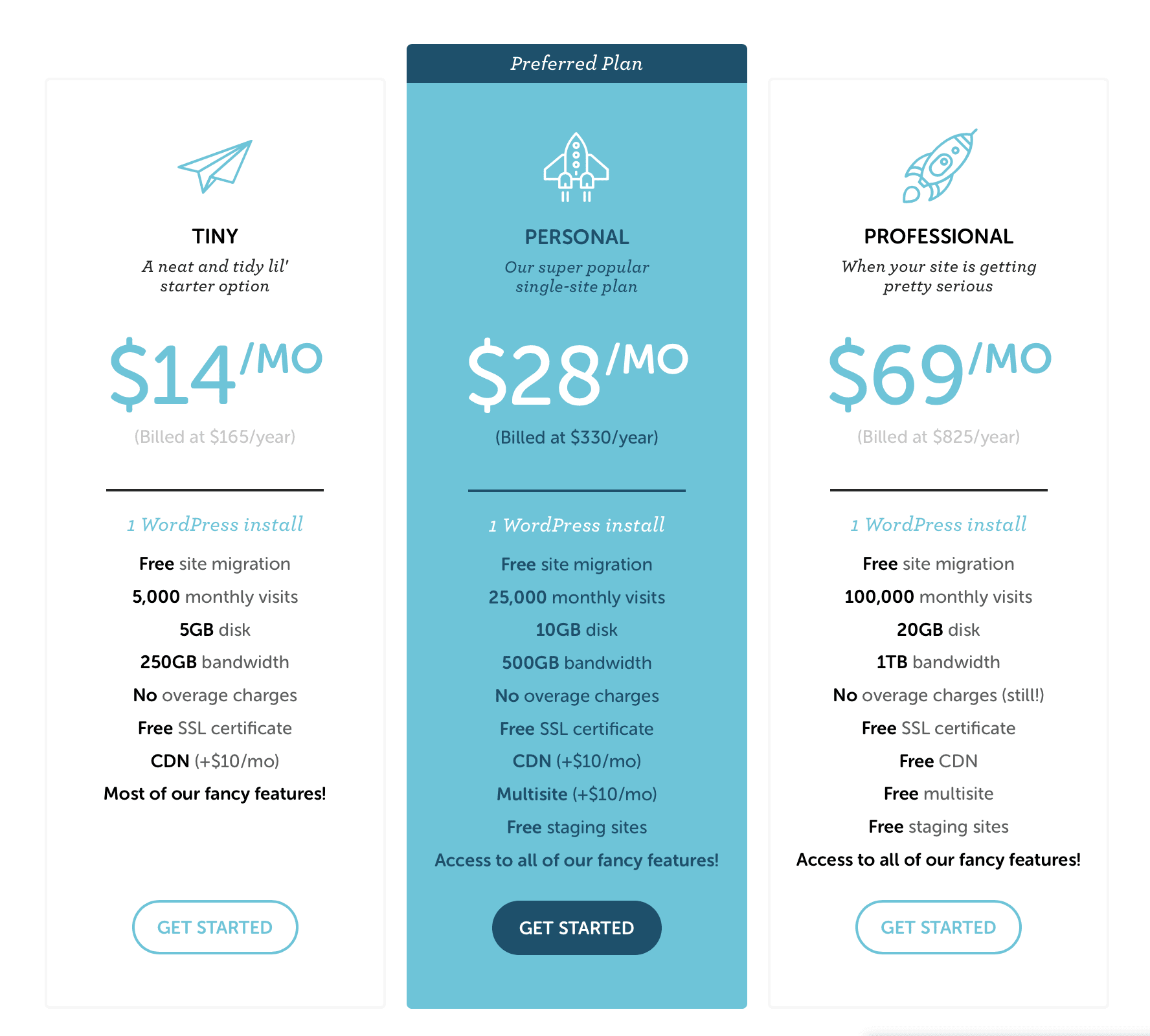 Digging in to Flywheel

Flywheel is a good option for managed hosting, and it’s pretty standard all the way around, from cost to security to access. You do give up some freedom which is typical for managed hosting, but Flywheel won’t nickel-and-dime you on features, and the support is available to you even if you’re not paying up front and your client is.

BlueHost is a newer entry into WordPress hosting (though it’s a veteran in the shared hosting scene). The options you get for WordPress hosting are spelled out much more explicitly than many companies, but the cost is a little higher, too. 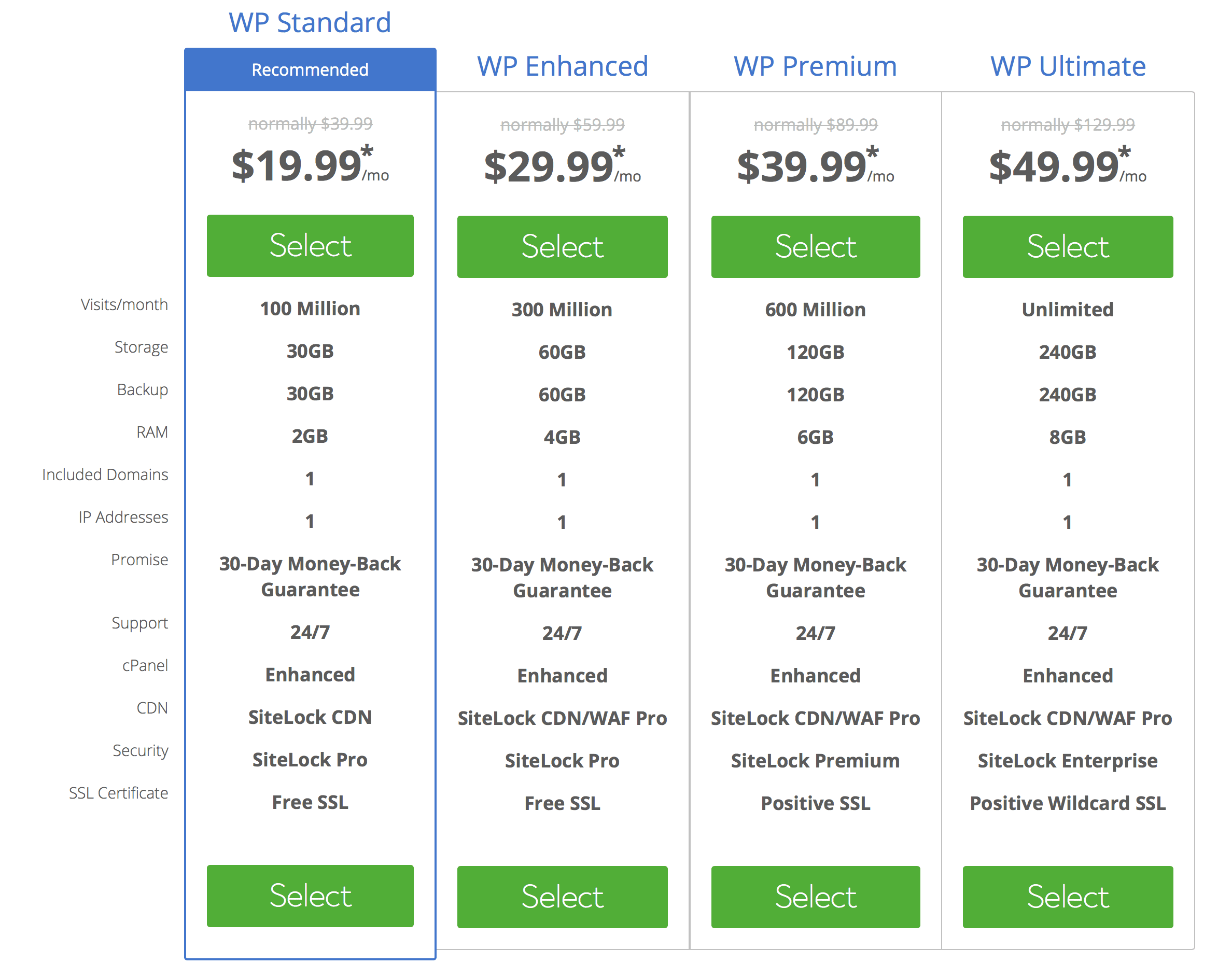 I think, though, that you get what you pay for with them, and the extra transparency that BlueHost offers really makes it a worthwhile option. In my experience, the WordPress hosting here is pretty stable.

Digging in to BlueHost

Flywheel focuses on designers and agencies, and GoDaddy focuses on new users. BlueHost, though, focuses on the technical agencies and businesses that make up the WordPress ecosystem. By providing details like their server architecture and giving you the ability to scale as you need, the higher prices they charge after the discount period seem to be worth it.

If you haven’t noticed by now, I am a pretty big fan of transparency, especially with managed hosting. If they’re managing it, that’s cool, but I want to know what they’re managing.

WP Engine is probably the most open managed WordPress company I know of. As you look into their plans, you see exactly what you’re being offered on what kind of architecture. 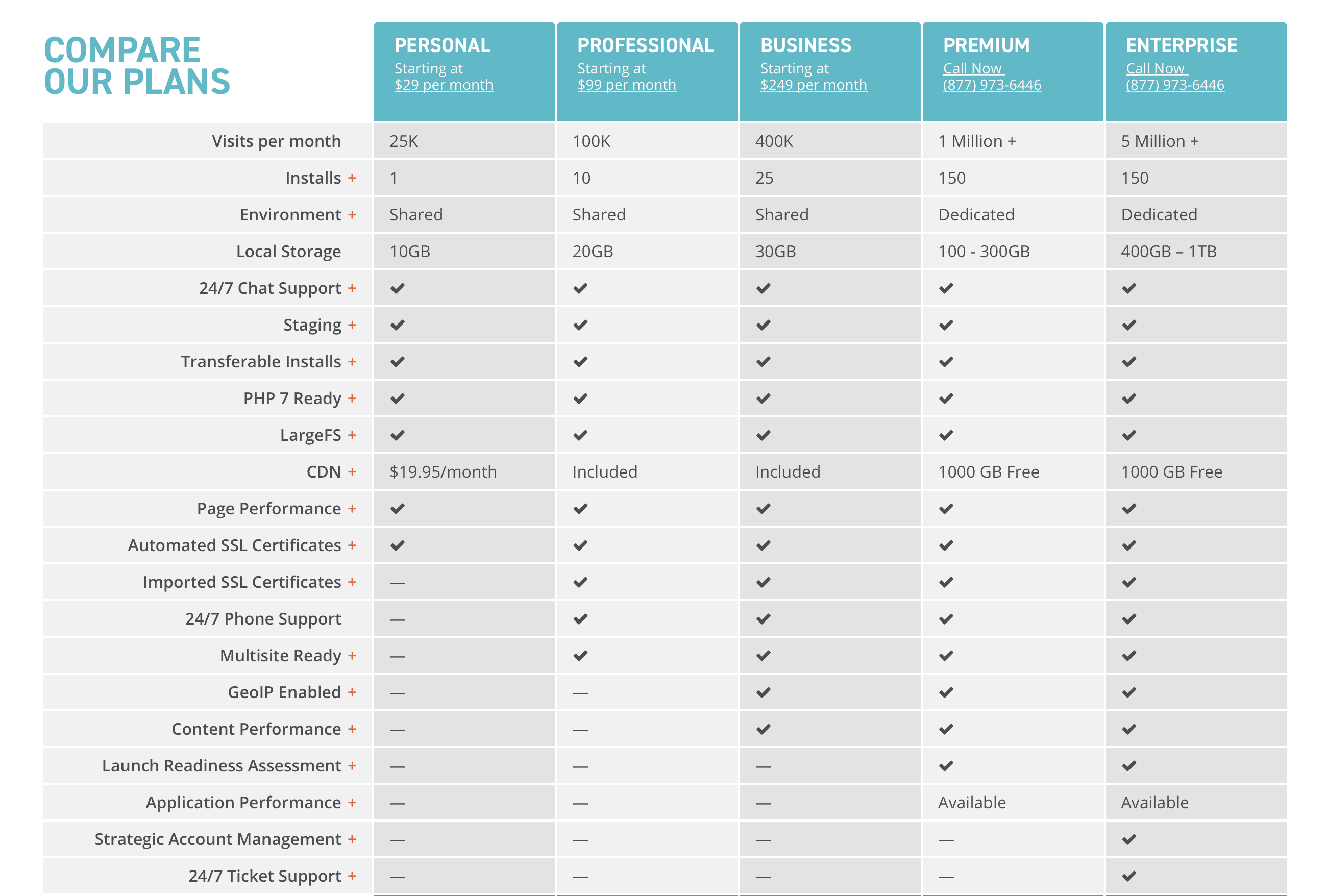 Digging in to WP Engine

WP Engine is the all-arounder of WP hosts. They don’t offer traditional hosting like BlueHost or GoDaddy, and they offer a more businessy, back-end oriented solution than Flywheel.

The no-nonsense way WP Engine approaches what they do is refreshing, and for many people, this is the hosting company you use with WordPress because of scalability. And they have a page that shows their entire development stack, which just makes my heart proud. 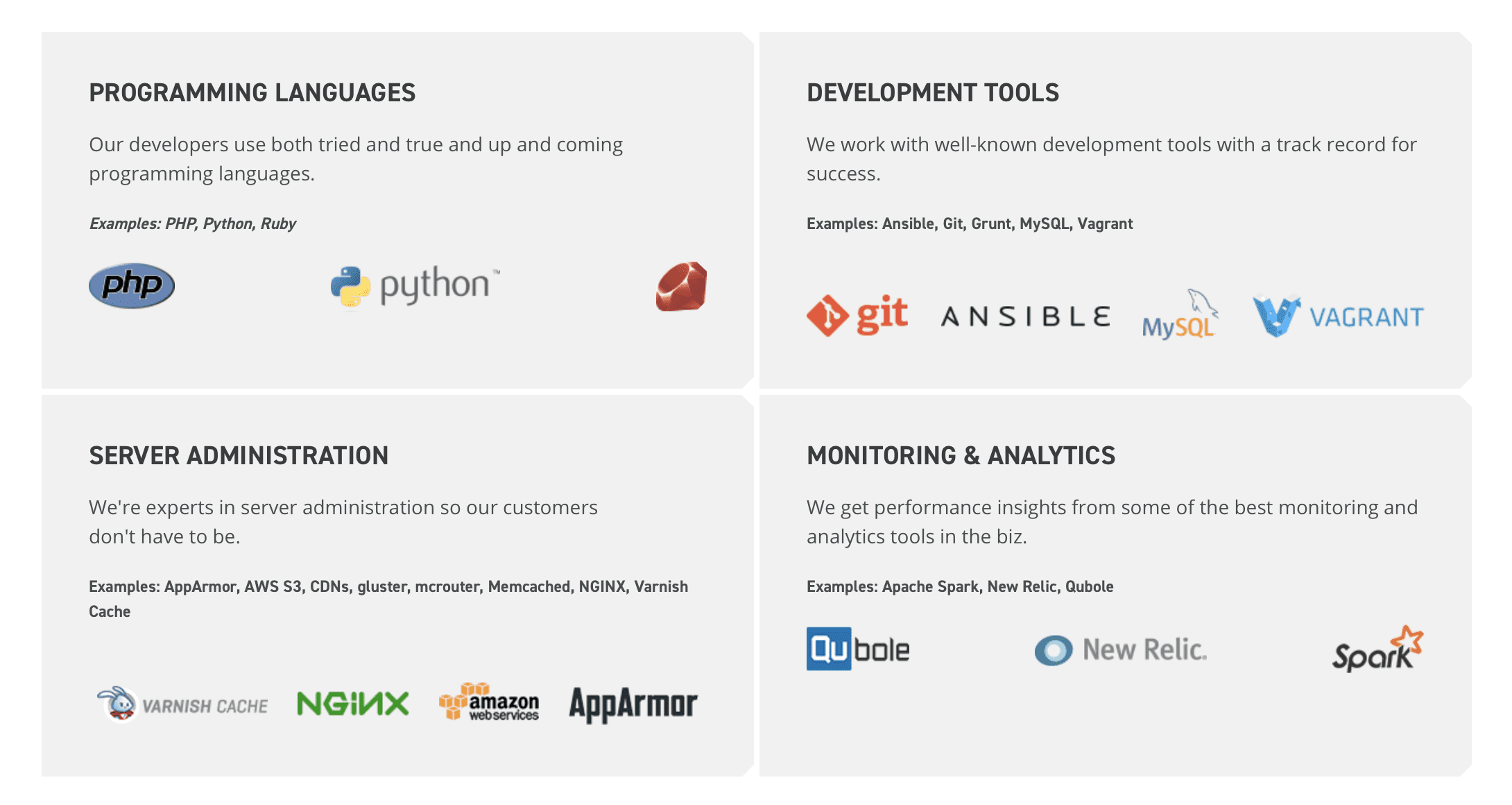 Transparency goes a long way for me, like I said. If you’re the same way, maybe WP Engine is the route you should go for WordPress hosting.

Cloudways is a widely recommended managed WordPress host, and I spent a good period of time there, myself.

What really sets Cloudways apart from typical managed WP hosts is how they handle what services you get. They don’t technically host the servers themselves, but act as a kind of liason and agent between you and the a la carte options you need — they literally manage your WordPress hosting for you. Rather than paying for features you may not want or need, Cloudways gives you total control over pretty much every aspect of your servers and applications.

Digging in to Cloudways

If you want a managed host where you’re still the one in control, Cloudways is really for you. They may seem overwhelming if you’ve never dealt with setting some of this stuff up before, but they respond quickly to customer support tickets, and once you’ve got the hang of things, you’re going to love the amount of tweaking you can do to your servers. That’s an option you don’t get at most other hosts, where even if you have a cPanel rather than a proprietary dashboard, you can’t adjust nearly this much stuff.

If you’re going to managed WordPress hosting because you want a hands-off approach, this may not be for you. But if you want the benefits of managed without your hands being tied behind your back sometimes, you really should look into Cloudways.

SiteGround has been around since, roughly, forever ago. They’re one of the biggest players in hosting, and they have an arm of the business specifically aimed at WordPress hosting. They have a lot of the options that other managed hosts have, but at a fraction of the price — at least for your first billing term.

Digging in to SiteGround

SiteGround has a very loyal following for a reason. When you treat your customers well, they want to continue working with you. SiteGround has made that very apparent in the way they handle support, and their customer satisfaction ratings are always high. Additionally, they keep up with technology (like having PHP 7.2 available for your servers) and provide a whole lot of tools for you to keep your WP installations running smoothly and quickly. You get a bit more control over your stuff than WP Engine, for instance, but you trade being with a company who focuses solely on managing WordPress at all times. With their intial discounts considered, giving SiteGround a try may be worth a shot.

Choosing the best option for WordPress hosting isn’t easy. There’s just so much to consider. When you break it all down, cost is similar and the services that are offered are pretty similar (though the up-sells and paywalls differ company by company).

In the end, I think the choice you make will depend on what demographic you fall into. You should choose…

What is your go-to WordPress host? What specs and options make a difference for you or your company?

Find trusted WordPress hosting that works for you.

Fast performance for business websites and smart tools for developers and agencies.

Get the performance, reliability, and support you need from the people behind WordPress.com

Great for agencies. Enjoy more choice and powerful tools for teams and collaboration.