Being a web professional means your day is filled with software that does everything from cutting screencaps into pieces to streaming videos on a second monitor. Because of the multitude of apps we use over the course of a work-week, the smartest move we can make is using as much open-source software as possible. Mainly, because it’s free, but also because it lacks the often-included malware and spyware corporate software bundles in.

Thanks to communities like GitHub, the quality and quantity of open-source apps has increased dramatically over the years to the point where right now, you can (outside of specialized features your job may need) run almost entirely off open-source software.

Mozilla Firefox comes in two flavors: standard and developer editions. Nowadays, Google Chrome is the standard web browser, displaying the vast majority of internet content. Firefox, however, is in second place. And for good reason. Firefox is fast, lightweight, and has a focus on privacy that Google Chrome simply can’t compete with. The dev tools are solid (especially in the dev edition), and the extension marketplace is every bit as useful as Chrome’s. You might run into hurdles occasionally with websites being Chrome-exclusive, but in that case, you also have the option of the open-source Chromium.

GIMP is an open-source alternative to Adobe Photoshop. Powerful enough for heavy design use by pros, GIMP packs a lot of power in its open-source framework. While some consider the UI hard to use (many open-source apps have this complaint leveraged against them), the fact of the matter is that it’s simply different from what many are used to — the Adobe or Affinity standards. If you’re web pro who needs image manipulation that Preview or MS Paint can’t handle, GIMP can save you a lot of money. It can do generally everything Photoshop can do, but without a subscription cost.

More open-source image editing: Paint.NET and Inkscape are more than worth your consideration as well.

For the 3D artists, animators, and video creators, Blender is probably the most important piece of open-source software you can use. Blender is close to being the standard in the field, and can stand up in pretty much every way to the corporate software it competes with. Licensed as GNU, Blender is free in the most liberal way possible. Take the code, do what you want to with it, package it back up, and it’s yours. The same for your work created with Blender, too. There can be a learning curve to Blender (as with any 3D modeling software), but the internet is rife with tutorials and documentation videos that can help ease you into creation, no matter your experience level with this kind of software.

You might use LastPass or 1Password already, but take a look at KeePass if you want a stable, open-source (OSI certified), password manager that you can use without actually having to install anything. Fully secured using encryption keys that you keep with you, using SHA-256 encryption, KeePass is worth using if you don’t want to have to install apps and extensions or keep your passwords in the cloud. You’re the one who controls KeePass, and that means a lot in the world of digital security.

Take the already-great OpenOffice and make it even better and more user-friendly, and you have LibreOffice. A direct competitor with Microsoft Office, Libre includes correlatives to Word (Writer), PowerPoint (Impress), Excel (Calc), Access (Base), and Publisher (Draw), as well as a charts creator and formulas editor. Many people have migrated to Google Drive as an office suite already, but if you want a powerful office suite that runs locally and has all the bells and whistles you’re used to in MS Office, LibreOffice is your best bet. 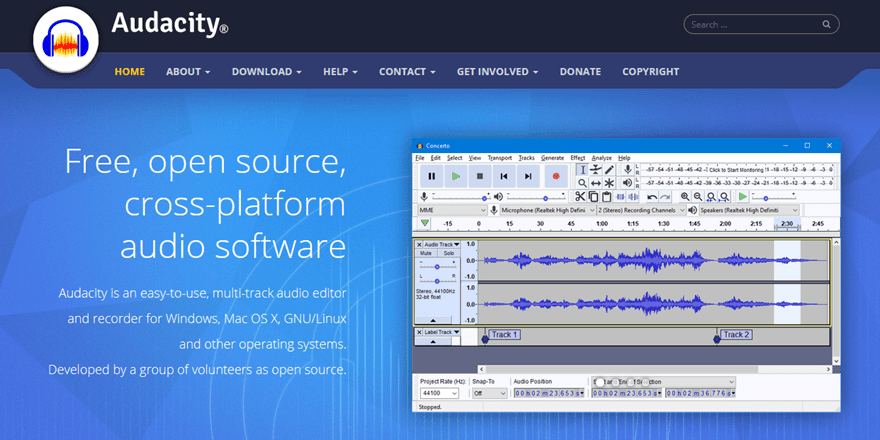 Audacity is the gold standard of open-source DAWs (digital audio workstations) these days. While there are other apps, platforms, and programs that many people use, the most highly recommended and downloaded is Audacity. That’s because it’s easy and accessible. It’s also very powerful. If you’re a web professional who has a podcast on the side, needs to edit some audio for a client, or anything that doesn’t require a mixing board for, Audacity is very likely to be all you need. Not quite as powerful as Adobe Audition, Apple Logic Pro, or Avid Pro Tools, Audacity more than serves its purpose for the vast majority of users.

Additional open-source alternatives (and non-open) can be found in our roundup of audio editors.

We know what you’re thinking. A Microsoft product on a list of open-source software? Didn’t we just talk about an open-source replacement for Microsoft software? The answer to both questions is yes.

VS Code is an open-source code editor that is backed by Microsoft, but developed by the community. Extensions are abundant, and you will have a hard time finding a feature or add-on that isn’t available for it. Since its debut, VS Code has quickly become the code editor of choice for many professional developers. Simply put: if you do text editing or coding, Visual Studio Code needs to be on your computer.

If you’re wary of Microsoft as an open-source curator, Atom might be the next-best-thing for you. Take everything we said about VS Code, take away the Microsoft, and you kind of have Atom. It’s a little heavier and slower than VS Code on occasion, but the extensibility it has may even exceed Microsoft’s entry. Now, Atom started as a GitHub-backed project, and GitHub is now owned by Microsoft. But the Atom project is still going on its own, and the community there is dedicated to making this one of the best open-source software apps available. 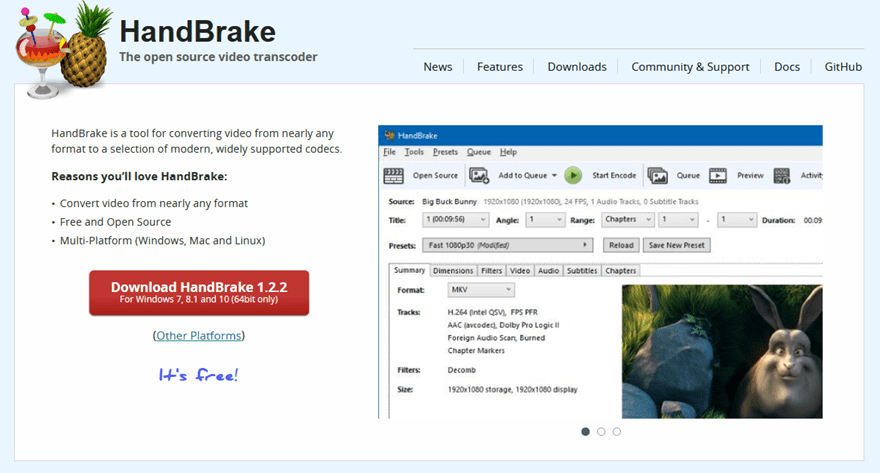 HandBrake has been around for years. And we’ve used it for years. Because when it comes down to video transcoders, HandBrake might just be the simplest and quickest to get it done. Need an MP4 to be a MOV? Easy. The app is also an easy way to encode video and break it into chapters for physical media like DVD and Blu-ray. It’s not a replacement for Adobe Premiere or its competitors, but keeping this one around for those moments when a client needs a video to be something else than the file they provide, HandBrake is a lifesaver.

As a kind of companion piece to HandBrake above, let’s just say that downloading VLC should be on your list, too. There are pretty much no codecs or video formats that VLC can’t play, so feel confident that as you transcode your videos, you can test them out in VLC to make sure things took. It’s a fantastic media player all on its own, too, and much faster and feature-rich than most default ones. All in all, you want VLC.

If you’re like us, SnagIt is one of your most-used tools. Greenshot is the open-source alternative to SnagIt, and it’s pretty solid on its own. Screen capture, annotation, and so on is just a few button presses and clicks away. Crop, paste, point, and number your tutorials with this open-source gem. It’s a lot better than pressing Print Screen and editing in Paint.

Need to run Windows on Mac? Easy! Just install Virtual Box! On Linux? You bet! While virtual machines are nowhere near as powerful as a native installation, sometimes you just need to run an instance of Windows for a specific application (or applications). Using a legitimate Windows key, Virtual Box lets you run both OSes concurrently on your Mac or Linux machine. This one is literally the best of both worlds, and it can save a web developer a lot of time.

As we wrap up our list, let’s pop a cork and have some WINE. Okay, that was not a good joke. But WINE is a good open-source app. If you’re not in Windows, but need to run a Windows application, WINE is probably going to be your best bet. Not all apps are compatible with it, but those that are run as though they’re native applications. So if you want to run Photoshop in Linux? You can do that with WINE. You don’t have to worry about setting up a whole virtual instance of Windows.

Admittedly, many of the benefits to WINE come in that it lets you run Windows games on Linux or Mac, but every web professional has to take breaks, right? That’s when having WINE installed is going to be helpful.

Trying to put together a list of the best open source software is like trying to list your favorite flavors of ice cream. There are just too many that are too good to pick. But we think this baker’s dozen will make your work life simpler, cheaper, and overall a little less laden with spyware and unwanted lines of code.

What do you think the best open source software is? Let us know in the comments!

Imagine waking up in the morning, getting ready for work, and arriving at the office, only to find that … there’s no seat for you. Or, maybe you get to work and — surprise! — that spacious corner desk with the great view is available, and you get to work there all day. With hot desking,...