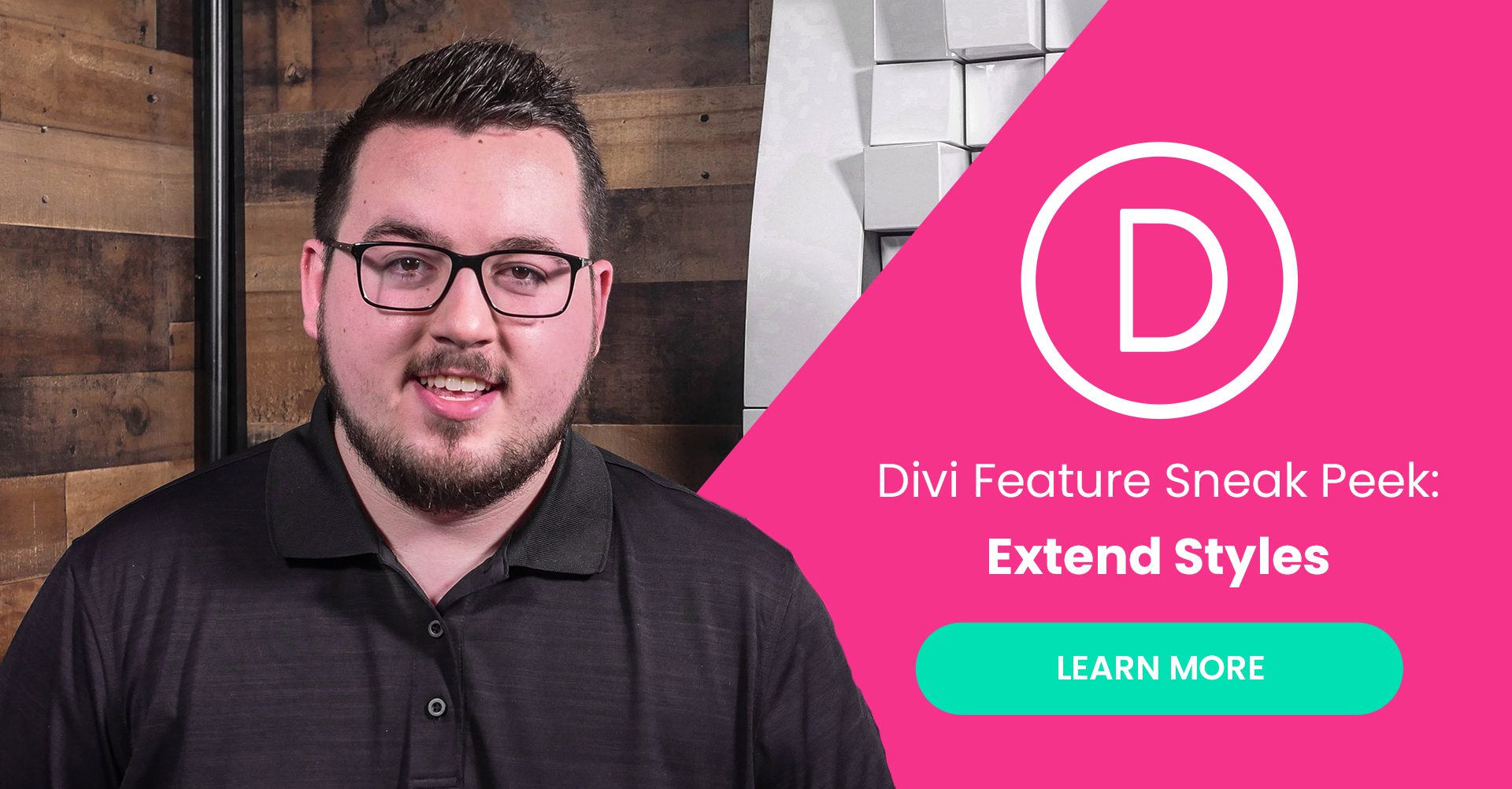 Extend Styles is Coming to Divi

Extend Styles is an upcoming Divi feature that will allow you to extend the styles of any element to other elements throughout your page in a few clicks.

Today, we are excited to introduce “Extend Styles”, a brand new design feature coming to Divi. Extend Styles is a unique feature that combines the usefulness of Divi’s “copy and paste” feature with the power of the “find and replace” feature in way that is intuitive and efficient. For example, if you like the style of a section, you will be able to extend that style to all sections in a few clicks. If you like a border style for a particular blurb module, you will be able to extend that border style to all your blurbs in your row, section, or page. This will save valuable time when making global changes to your page and make it easier to explore new design possibilities.

How Extend Styles Will Work

You can extend the styles of any option group within an Section, Row, or Module. Simply right click on the title of the option group within the elements settings modal and select the option to extend styles. In the extend styles popup modal, you can define the scope of your action on two levels. On the first level, you choose the element(s) to which you want the style applied (i.e. all Sections, all Rows, all Modules, all Blurbs, etc.). On the second level, you define how much of your page will inherit these updated elements. All sections will extend to the entire page. Styles to All Rows can be extended to the section or the entire page. And styles to all modules can be extended to the column, the row, the section, or the entire page. 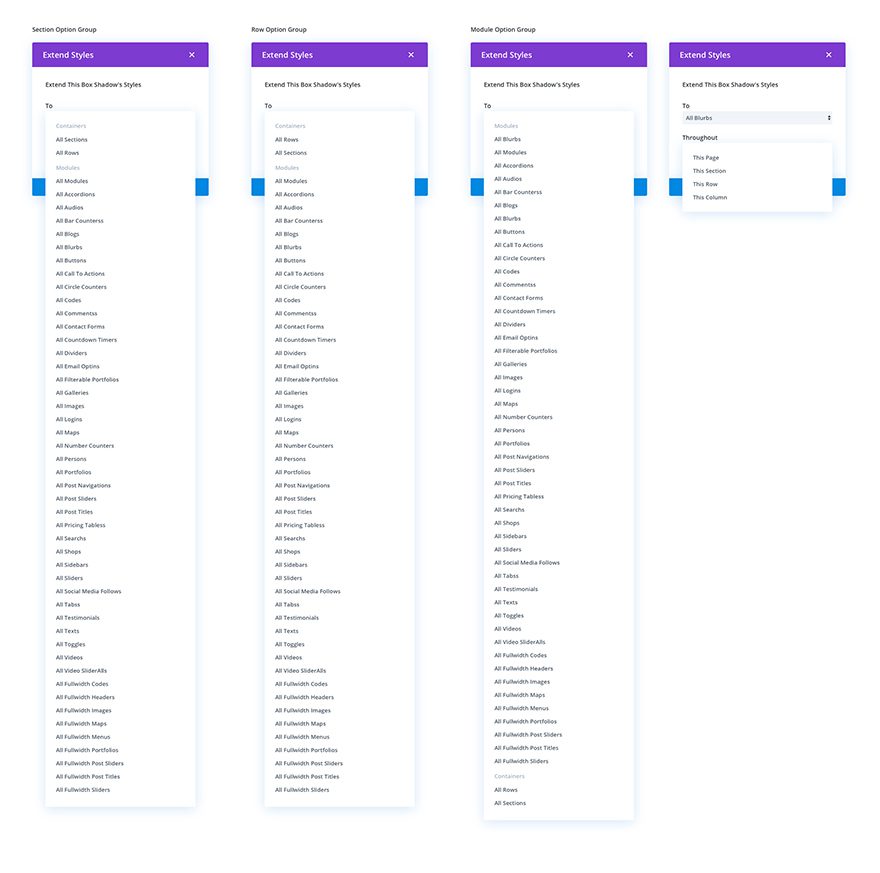 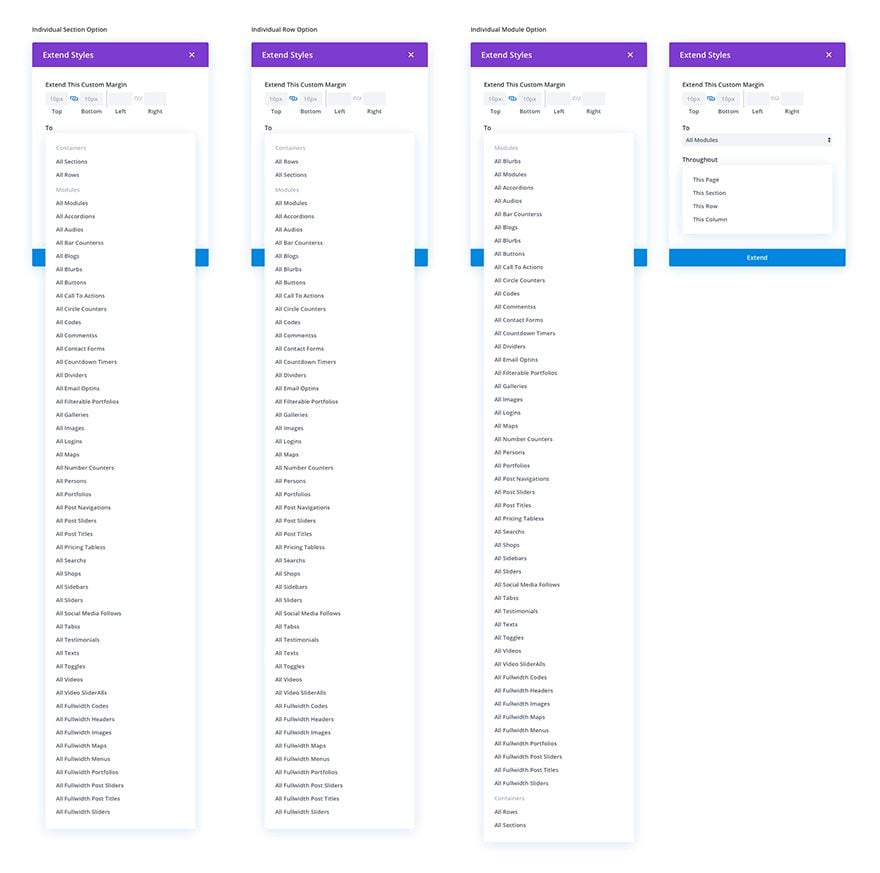 Below is an illustration of the process of extending a blurb’s Title Font to all blurbs in the same section.

Divi. Bridging the Gaps of the Design Process.

We don’t want you your creativity to be blocked by mundane tasks.

This ongoing effort to bring more design features to Divi is meant to liberate, not restrain. We want to help bridge the gap of the design process to harmonize workflow and encourage creativity. Our hope is that these features add the flexibility users need to design the way they want as well as the functionality needed to get the job done efficiently. We look forward to seeing how this update will make Divi a more dynamic tool for bringing new ideas to life.

Jason started a career in education before co-founding a web agency specializing in Divi websites. Now he works full time as a content creator for Elegant Themes where he enjoys contributing blog posts, tutorials, and documentation about all things Divi and WordPress.

Posted on November 22, 2018 by Donjete Vuniqi in Theme Sneak Peeks

Posted on October 18, 2018 by Jason Champagne in Theme Sneak Peeks

Posted on October 13, 2018 by Donjete Vuniqi in Theme Sneak Peeks

Wait! 👋 Black Friday Has Arrived!
$1,000,000 in free prizes, exclusive perks, bonus gifts and our biggest discount of all time!