Since its launch in 2006, the growth of Twitter has been phenomenal. Every year it gets more popular due to its adoption by mainstream media, celebrities, and of course, average Joes.

Twitter is a fantastic tool for website owners as it allows you to send an update to followers and announce your latest articles. You can also use Twitter to promote offers, share other interesting articles, network with fellow website owners, and connect with your audience. 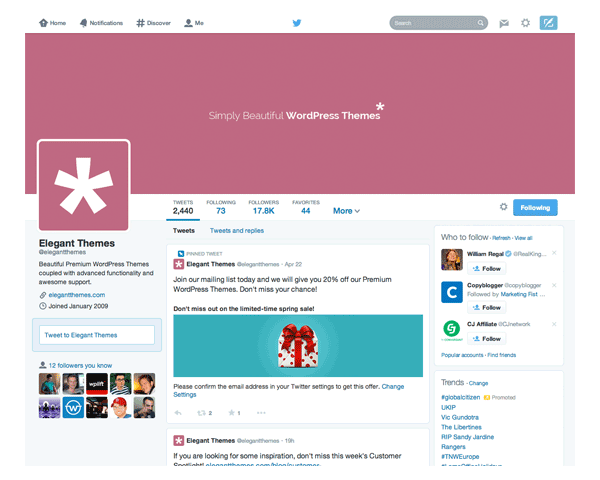 Thousands of Twitter related plugins are available for WordPress. Some good, some not so good.

Please note that the majority of these plugins require you to create a Twitter application or an official Twitter widget in order to use them.

The official widget from Twitter was not designed for WordPress, however it is still a great option 🙂

Twitter allow you to display tweets from a range of sources including your own feed, tweets you have favorited, tweets from lists you have created, search queries, and collections. You can define the height of the widget and choose from either a light or dark color scheme. The widget contains a follow button to allow people to follow you on Twitter directly through your website.

The official Twitter user widget lets you select one of five sources of tweets.

The Jetpack by WordPress.com plugin, for example, includes a Twitter Timeline widget that is identical to the one that Twitter provides.

In order to use the widget, you need to create an official widget and then use the ID number of that official widget with the Jetpack widget. The benefit of using this widget over the official one provided by Twitter is that it gives you many additional layout styling options such as border color, transparent background, and the the option of removing the header and footer.

Jetpack relies on the official Twitter widget to function, however it offers more styling options.

Another plugin that aims to restyle the official Twitter widget is Twitter Widget with Styling. The plugin works well, though it not user-friendly in the way that the Jetpack Twitter module is. In order to style your widget using the plugin, you need to add a custom CSS file to your theme folder called style_twitter.css and style it manually.

Easy Twitter Feed Widget Plugin is another option that offers a lot of customization over what is displayed in your widget.

Though you may find the simplicity of WP Twitter more suitable. The plugin allows you to automatically publish updates of new articles to your Twitter account and integrate Sharethis sharing buttons into your design. It also includes a profile and search Twitter widget. The width and height of this widget can be changed. as can the border and link colors. 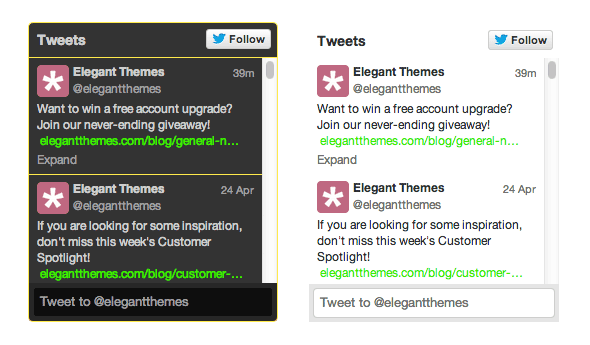 WP Twitter gives you basic control over the style of your widget.

Simple Twitter Tweets is a useful Twitter widget plugin that stores Tweets in your database so that your widget will not be blank if the Twitter API fails. The plugin allows you to display your profile avatar, and a follow button with follower count, underneath the widget. 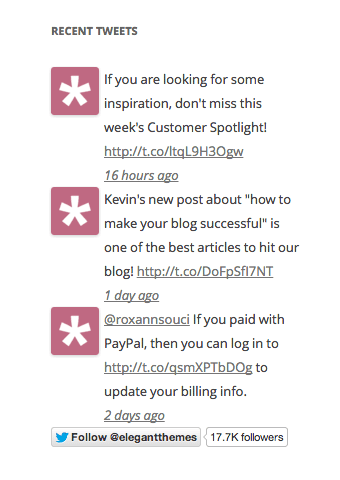 A simple Twitter widget that has many useful configuration options.

Recent Tweets Widget is a minimalistic Twitter widget solution that caches tweets on your website so that your widget will not be blank if the Twitter API is unresponsive (which it frequently is!). The plugin allows you to define the number of tweets that are displayed and the number of hours that tweets are cached.

Recent Tweets Widget is a simple and elegant solution.

WP Twitter Feeds is one of my favorite Twitter widgets. I just love the layout it uses to display tweets.

It has many optional features that can be enabled including your Twitter avatar, screen name, and Twitter intents. The caching time for tweets can also be defined. 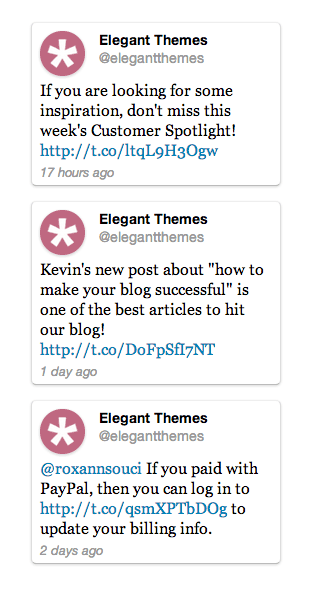 WP Twitter Feeds is a cool plugin that displays your tweets in stylish boxes.

If you are looking for a minimal Twitter widget, the aptly named Minimalist Twitter Widget is the plugin for you. It allows you to display tweets from a username or hash tag. The number of tweets displayed can be changed through the widget. You can also disable retweets.

This is a great way of displaying older article links and quotes from your article, however it may also display those late night drunken tweets that you would rather forget 😉 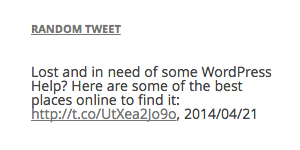 Rotating Tweets is a great Twitter plugin that displays your latest tweets in a ticker. It comes with a lot of customisation options that lets you change what is displayed such as retweets, source of tweet, time of tweet, and whether a follow button is displayed. 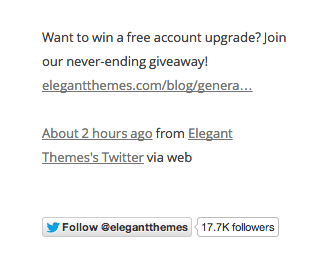 Rotating Tweets rotates your latest tweets in a ticker.

My Twitter Widget was a plugin that I was initially going to list as I loved the design of the widget. However, the developer of the plugin has built in a credit link for medical jobs into the footer. It can be removed by deleting the code from the plugin, but I do not believe WordPress users should support developers who use sneaky tactics such as this. Still, if you like the look of the plugin, you could always delete the unnecessary link and use the widget.