Bear: The Writing App You Didn’t Know You Wanted

B.J. Keeton 24 Comments Reader Disclosure Disclosure: If you purchase something after clicking links in the post, we may receive a commission. Thank you for the support!

I am composing this article totally and completely (outside of final edits, of course) on my iPhone. I say this upfront because I want you to know how wonderful an experience using the Bear writing app can be.

While Bear is not my 100% go-to text editor, it is by far my favorite mobile app to write in. Sure, I adore Ulysses and it’s an overall better daily driver than Bear because of my workflow, but there’s something absolutely entrancing about how smooth, sleek, and well-designed Bear is. I always end up going back to it when I have a project I have to spend more than a few minutes on.

Especially when I have to do work on mobile. If you’re a writer in the go, Bear is definitely something to look into.

Marky Markdown and the Funky Bunch

Like many mobile text editors these days, the Bear writing app lets you compose in markdown. It’s quick, functional, and totally compatible with pretty much everything. (And score to WordPress users, Jetpack lets you import markdown and converts it for you.)

If you don’t know markdown, though, it’s okay. Bear gives you a toolbar that automatically adds in the formatting for you. Hit B, for instance, and Bear gives you two asterisks around your text. 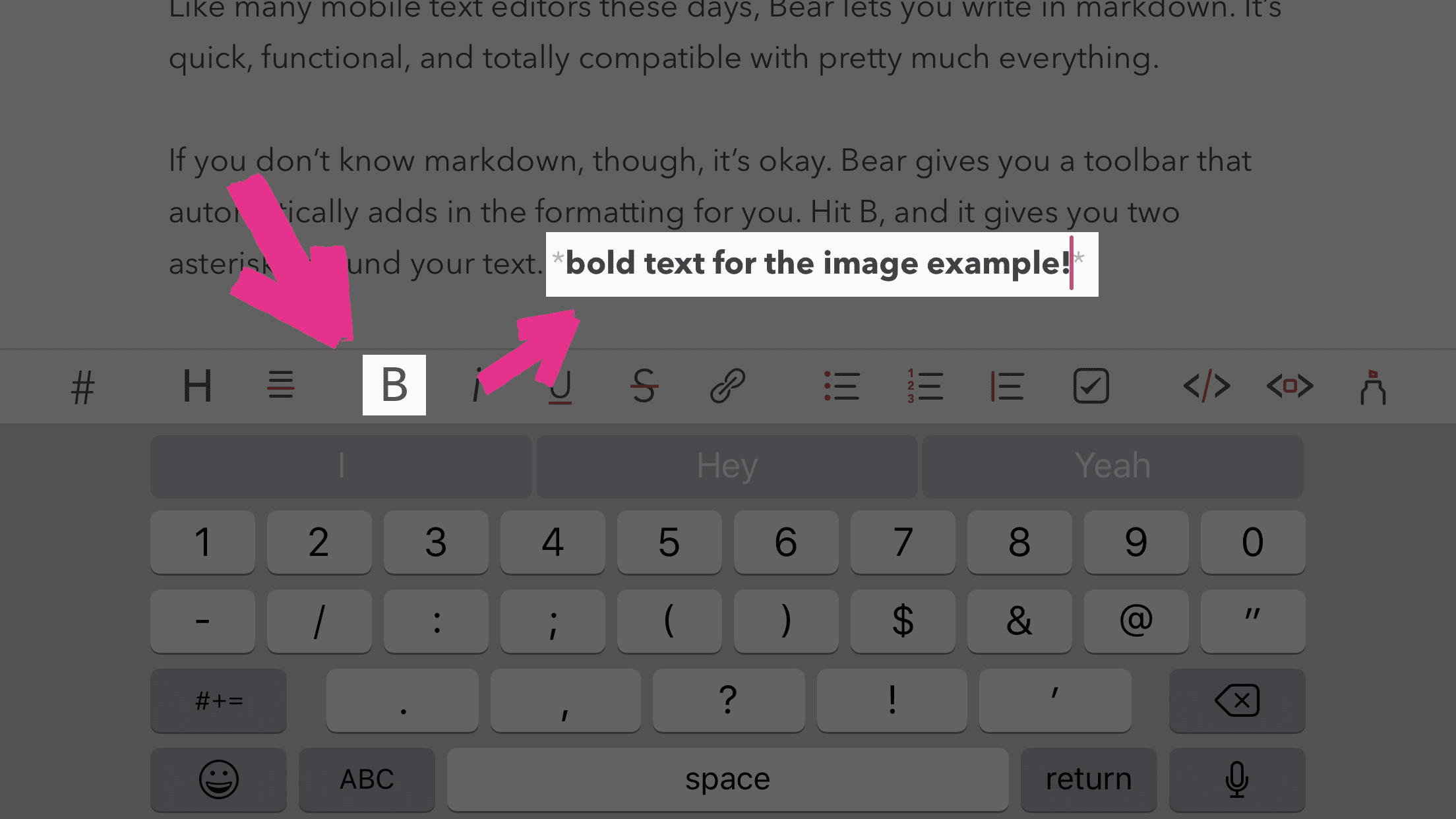 Fast, But Not Furious

My absolute favorite thing about the Bear writing app is how quick it is. I’m on an iPhone 7 Plus, and things are generally pretty snappy, but Bear really zooms past most apps.

There is zero lag, no delay in responsiveness, and you never feel as though you’re being held back by the software.

Swapping between notes is a breeze, too. Loading feels almost exactly like hitting the link for a Google AMP article. It’s just there.

Pic or It Didn’t Happen

You can add images directly to your notes in Bear. It’s a really useful feature that works so much better than in other mobile editors. Just press the play button on the video below to see just how easy it is.

That may not seem like much, but in other editors, the images may not show up in-line. They show up as a link. Or sometimes as a placeholder.

I have been able to plan out image-heavy articles in Bear just as easily as I have in the desktop versions of Google Docs or MS Word.

I’m a stats nut. I think most professional writers are. I want to keep an eye on my word count for flow and structure, paragraphs for readability, and like I said on the This Week in WordPress stream a while back, reading time is an incredibly useful UX tool.

So just hitting the little i in the Top-right corner, you get all that and export options, too. 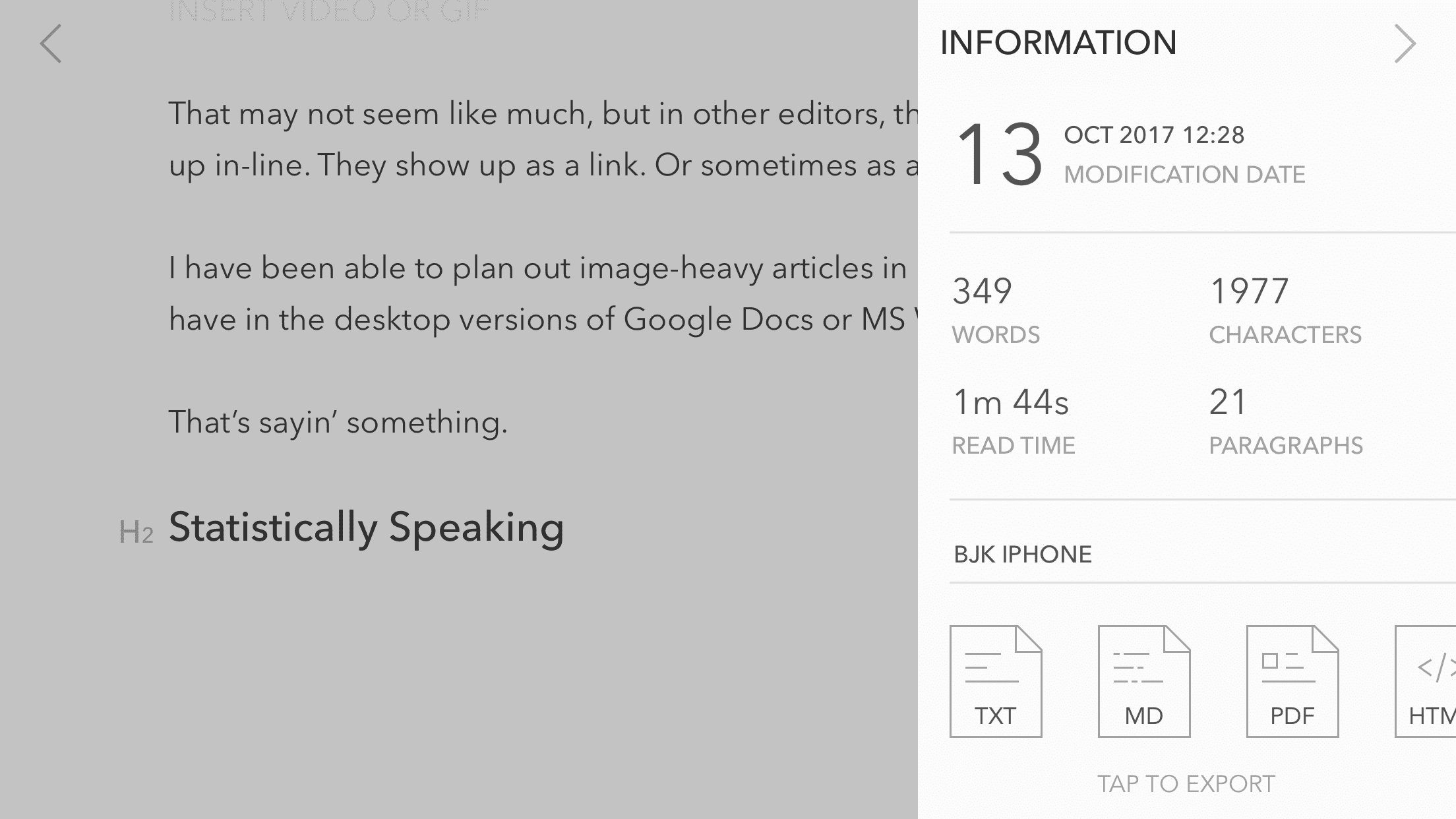 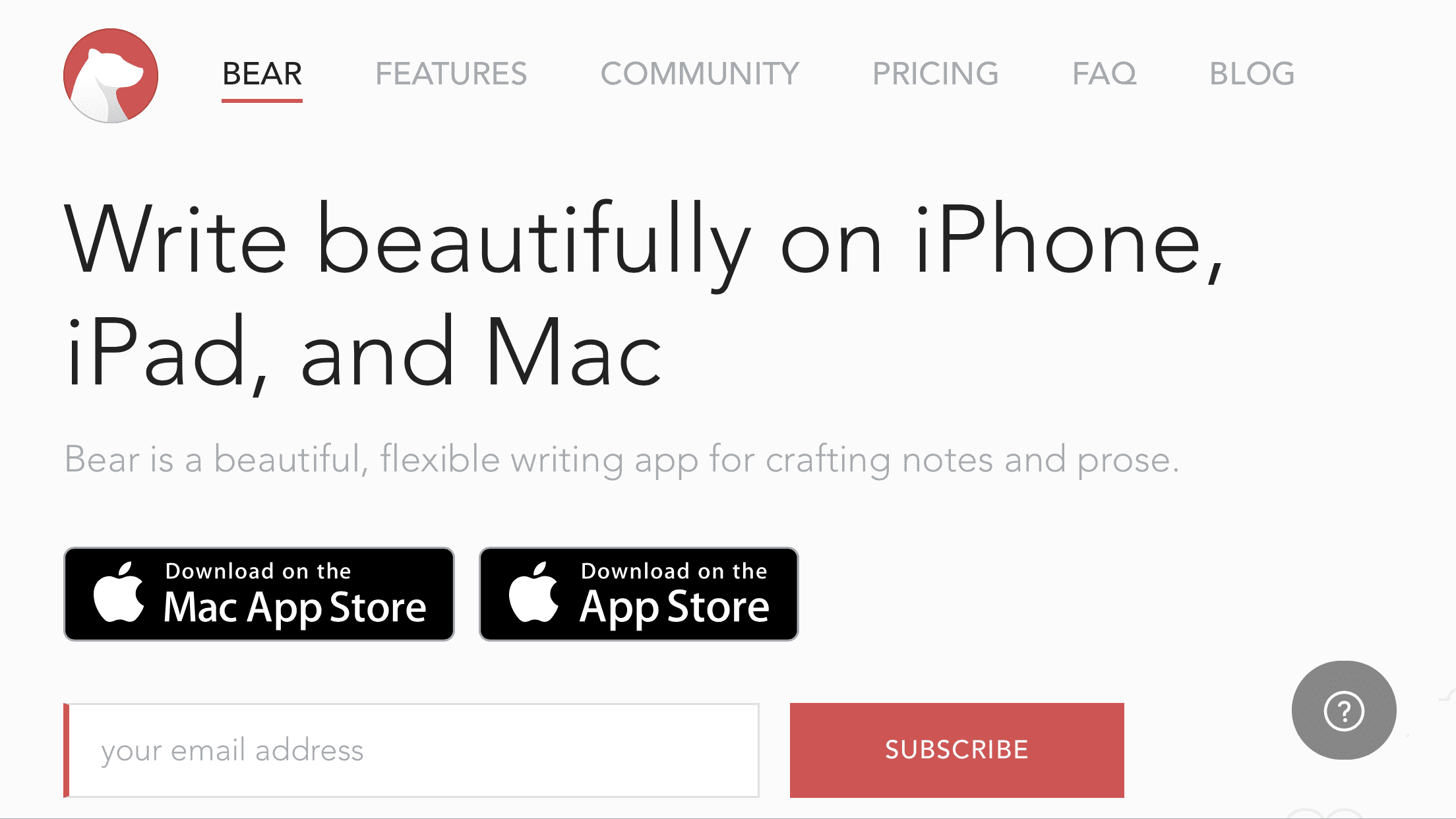 Bear makes a big deal about being well designed. They use the word beautiful a lot and for good reason. (Their choice of Avenir Next as the default font is genius to me. It’s so pretty.)

I’m terms of text editors and word processors, Bear is at the head of the pack (or head of the sloth, if you’re really being technical). I love Ulysses, but Bear is sleeker. Writing in Ghost is a delight, but it doesn’t have the features and slickness.

Compared to Bear, most other writing apps and programs feel bloated and clunky. Especially those on mobile. I am now spoiled by having absolutely zero input delay.

You can also choose multiple themes for the app, so if you’re not a fan of the white background with black text, you’re not stuck with it.

I like the one called Dracula. But maybe that’s because I’m a Halloween junkie. Some themes are bright and garish, others are subdued. The app icon can change based on the theme, too. That’s just cool to me.

Yes, hashtags are so 2013. But I love them. I can’t help it. I use them all the time, and Bear has integrated hashtagging into its core functionality.

You type a hashtag, and Bear starts a new group in your menu of all notes you’ve used it in. 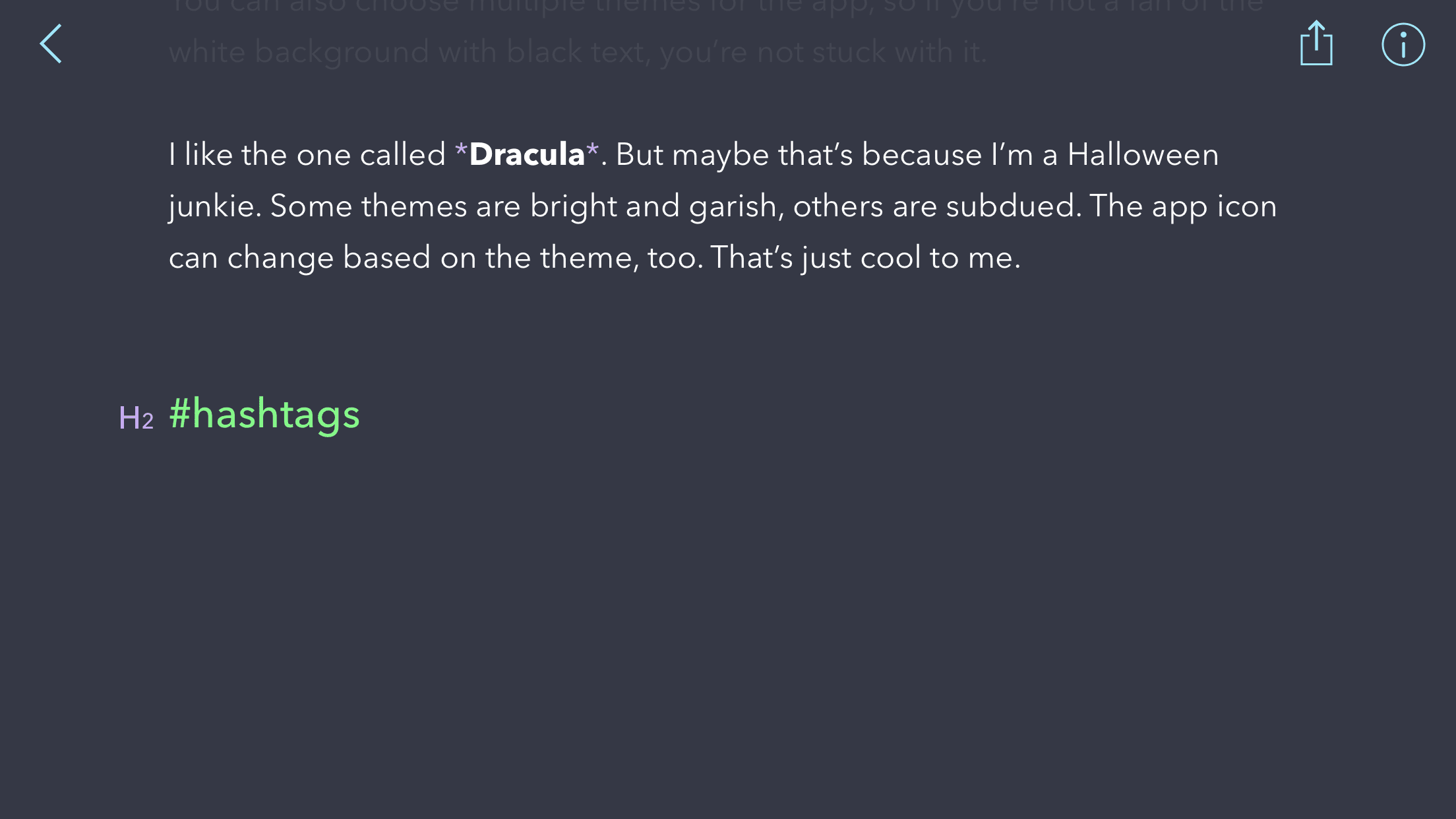 This is great for folks like me who need to keep things sorted. I’ve got a PHP hashtag, JavaScript, This Week in WordPress, and more.

The downside is that if you are as flippant in tone as I am, and you use hashtags in your writing…your organization goes right down the drain. #bummer

Or as my writing professors would say, it makes me mindful of my word choice.

While I do use the Bear writing app for an almost-full word processor, the developers made it to be a note-taking app.

You won’t find a lot of advanced features here. No WordPress integration—HTML and markdown exports, sure, but not directly to WP. You have to go that extra step to get it into WordPress, which is okay. I mean, we’re all probably doing that every day, anyway.

Additionally, you can make to-do lists (which are great for writers who need to track ideas and topics already covered in the article as you write it), and they just implemented an Apple Watch app that has voice recording and task management.

The feature that really makes this note phenomenal is the sync between mobile and desktop.

The sync works perfectly, and I’ve never had it not match up. It’s really helpful when I’m having to write between errands because it really is seamless to move from one device to the other.

The quickness of the sync and the app itself really highlight the devs’ focus on making the entire experience of using the software pleasant. I have yet to be frustrated by this app, and I use it a bunch. I can’t say that for very many pieces of software at all.

Everybody’s Got a Price

And in Bear’s case, that cost is the Apple tax. Like many design, dev, and writing tools these days, Bear is only available for Mac and iOS.

I’ve been seriously thinking of swapping back to Android lately, and missing out on Bear and Ulysses is a big check in the Apple column. Yeah, it’s that good.

That said, the app is totally free for all the base features. But if you want sync, export, and theming, you will need to drop $1.49 a month or $14.99 a year—which is cheaper than most other premium notes apps.

I used the free version for a long time before I upgraded for the sync. The other features are just icing. The sync is worth a buck a month to me.

Speaking of Apple and Syncing…

The desktop app for Bear is pretty sweet. It’s Mac-only, but if that’s not a deterrent, it’s just as fast and pleasant as the mobile app. While it’s not as robust as Ulysses or Scrivener, it’s not trying to be.

As far as desktop notes apps go, I feel like the Bear writing app is much stronger than most. I find myself keeping it open and hashtagging my notes more and more often these days, replacing my old standby of using Atom or Sublime Text (or even the—shudder—default Notes app).

It’s a Bear of an App

The Bear writing app isn’t trying to be anything more than it is. It’s a note-taking app that excels at what it does. The app is clean, intuitive, and includes enough features that I can’t recommend it enough.

There’s no reason not to try the free version, and if you get as much use out of it as I did, you’ll probably toss a buck at it, too.

I mean, any notes app that I can substitute as a full-function composer is worth its weight in gold, if you ask me.

Have you used Bear? What are your favorite writing apps that make your workdays better?