In the past couple of years, Markdown has gained a lot of momentum in the web publishing community. It is a syntax that makes writing HTML a lot easier, and once you get the hang of it, you’ll find yourself writing posts quicker without worrying about formatting. Markdown is meant to give a set of shortcuts when drafting posts, which are then converted into structured HTML markup when they are published. Fortunately, there are several ways to add Markdown to WordPress that are reliable, fast, and helpful.

Markdown is essentially a formatting syntax that makes it a lot easier to write posts that can be easily converted to HTML. It was developed by John Gruber and Aaron Swartz and released in 2004. Since then, it has taken off a life of it’s own, and you can see it in everything from GitHub readme files to basic text editors and apps. 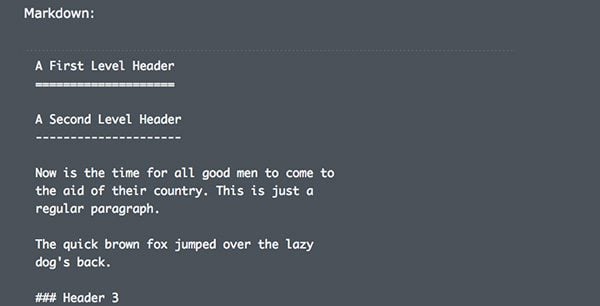 Markdown works by offering an easy to use syntax for substituting common HTML elements, making the process of formatting posts a lot easier. This is probably best shown by a simple example.

The hashmarks, asterisks and parentheses might seem a bit confusing at first, but they are simply replacing HTML elements which are lot more cumbersome to write, while still preserving the structure of HTML. The above block would look like this in HTML:

The triple hashmark indicates a h3 tag, the double asterisk makes a word or phrase bold, etc. The syntax was developed to maintain focus when writing for the web. As Markdown has progressed, more HTML elements have been included in the syntax, and it is possible to write an entire post without having to turn to a WYSIWYG editor.

How Does Markdown Work?

Markdown actually has two fundamental parts. The first is the structure, the various components that make up the syntax. The second is the actual parsing of Markdown to convert it to HTML (or really, any number of formats). Fortunately, you typically don’t have to worry about the second part. There are lots of clever parsers out there that can perform these conversions. The structure of the language actually makes this process really simple.

The first part is more helpful to authors and site owners. HTML was not meant to be a fluid writing language, and making sure that tags are closed and used properly can break you away from the most important part of your post, the content. Those who draft their posts in WordPress know that there are really only two solutions for formatting. You can either write the HTML straight into the text editor, or use the TinyMCE toolbar to add formatting as you go along. Neither of these are very convenient, and both break up the flow of writing. If you can master the basic syntax of Markdown, then you can easily draft your posts, and have the formatting come naturally.

If you want to start using Markdown in WordPress, the first step is to start understanding how the syntax works. Markdown elements are meant to be simple shortcuts, and over time, they will become second nature. But it’s useful to get a handle on the basics. Over the years, there have actually been several different variations of Markdown, which have different rulesets. It can be a bit confusing when you first start out, but for the most part, things remain the same from format to format. If you’re looking for a good quick reference guide, I’d recommend the Jetpack guide. Jetpack, which we’ll discuss a little later, uses the Markdown Extra implementation, which is the same you will see for most plugins in WordPress.

The best way to get started with Markdown is to start with some straightforward substitutes. For instance, headers are designated by pound signs. The number of pound signs you use indicates which heading tag it will be.

Italics and bold words or phrases are indicated by putting the block between a single or double asterisk, respectively.

Adding a list is as simple as using asterisks for an unordered list or numbers for a numbered list. Links are added with brackets, and block quotes require a simple “>” character.

Basically, there is a shortcut for any element you may want to add. This includes simple formatting like what’s shown above, but also supports code blocks, preformatted text, definition lists, image references, and more. In most implementations, there is even support for syntax highlighting built right in.

After you’ve gotten a grasp of the basics of Markdown, the next step is to integrate it into WordPress. There are a number of plugins that can help you do this, so you can start drafting Markdown posts right in the post editor.

Markdown is a fairly prominent feature of Jetpack. For those unaware, Jetpack is an entire toolset for WordPress users, with features that support social media publishing, carousels, advanced comments, infinite scroll, and a whole lot more. The plugin works by allowing you to activate or deactivate different “modules,” which each represent a different piece of functionality. One of those modules is Markdown.

Once you’ve connected Jetpack up, you can turn Markdown on by going to Jetpack -> Settings, scrolling down to the “Markdown” module and clicking the “Activate” link. After you do this, you can start using Markdown syntax on posts and pages automatically. You can also enable Markdown in comments by going to Settings -> Discussion in the WordPress admin and checking the box labeled “Use Markdown for comments”.

After you’ve set this up, you can start using the Markdown syntax in the post editor. You can add Markdown in either the Visual or Text editor, but I’d recommend the latter, as it keeps things very clean and is free of any extraneous formatting. Simply write Markdown using the syntax discussed above, and this will be converted to HTML and published as a normal post. Jetpack allows all of the basic Markdown elements, and has built-in support for syntax highlighting, which you can read more about in the Markdown reference guide. Everything works behind the scenes for you, and you can easily mix normal formatting on some posts, Markdown on others, or a combination of both in a single post.

Jetpack also supports Markdown for custom post types, though not directly. If you want to enable Markdown on an existing custom post type you’re using in WordPress, you’ll have to open the functions.php file of your theme or child theme, and add this small bit of code:

Just make sure to replace “custom-post-type” with the actual name of your post type, and you’ll be all set. Of course, Jetpack can be a bit robust if you’re only looking to add Markdown. But there are other plugins that can help with that.

WP Markdown is a standalone implementation of Markdown in the post editor, with a few extra features. After you activate the plugin, you can set it up by going to Settings -> Writing and scrolling down to the “Markdown” section. Here you can turn on or off Markdown for posts, pages, custom post types, and comments by checking the box next to each listed.

Rather than allowing you to write in a Visual or Text editor, WP Markdown will disable the visual editor altogether on post types where it is activated. So if you choose to use this plugin, you should be sure that all of your posts will be written using the new syntax. It will also convert all of your old posts to the Markdown format.

WP Markdown also has another handy feature called a help bar. You can activate this in settings section for the post editor and for comments. If you do activate it, and visit your post editor, you will see a new toolbar up at the top which has a few WYSIWYG shortcuts for adding certain elements. You can add links, images, blockquotes, and other common elements by clicking the appropriate button and entering the required information in a textbox. This will then be inserted to your post as properly structured Markdown. But the most useful part of this is that the help bar will also add a preview box at the bottom of the post editor, which will show you what your text will look like when it is output. That way, you don’t have to constantly preview to make sure that your formatting is correct. It’s right there in the post editor.

PrettyPress is actually a new approach to the post editor altogether, rather than a simple Markdown plugin. After you install it on your site, you will see a new button in the sidebar of your post editor labeled “Launch PrettyPress”. This will launch a new editor window entirely, which splits your screen in half. On the left side, you will see your normal WYSIWYG post editor. On the right side, you will see a live preview of your actual post within your theme, that updates every time you add to the editor. The result is a side by side visual editor for drafting and formatting posts.

Markdown is really an added bonus in PrettyPress. The plugin supports Markdown in the Text editor, though not in the Visual editor. Like Jetpack, it allows you to mix and match Markdown posts and regularly formatted posts. Of course, with PrettyPress, you can preview your draft in real time. The plugin, however, does not support Markdown in comments. It is limited to the post editor.

For Markdown to be right for you, it needs to fit into your workflow. This probably means that you are drafting your posts in the WordPress editor, but are looking to speed up your flow a bit. Or maybe you like to draft posts in your own text editor, but have ran into the copying and pasting from Word problem just a few too many times. You can draft up a Markdown post in the simplest of text editors, and then just copy it over with one of the above plugins activated, and you’ll have a fully formatted post. Your familiarity with Markdown will become fairly proficient even after just a few posts. After that, you won’t want to turn back. So try it out, and see if it’s right for you.

Jay is a WordPress developer based in NYC. He is the founder of Tidy Repo, a curated list of useful plugins, and maintains many active WordPress sites. By day, he codes. By night, he codes.