You come across screen mockups on all kinds of websites, from big ones to small ones. They help showcase previous work, services, and the like. They also contribute to the entire look and feel of your website and emphasize that your company (or your client’s company) is focused on technology. In this post, we’re going to show you 5 awesome ways to add images and videos to your screen mockups with Divi’s built-in options. This post contains two parts; the first part is about customizing your screen mockup with Photoshop. You can download the mockup we’ll be using in this post for free. And in the second part, we’ll show you how to take your mockups to the next level with Divi.

Before we dive into the tutorial, let’s take a look at the different examples we’ll show you how to recreate, step by step.

To help you bring this tutorial to a good end, we’re going to provide you with the mockup that is being used in this tutorial for free. Actually, we’re providing you with two device mockups and several high-quality images since the resource we’re (re)sharing is actually from our Design Agency Layout Pack. When you download the image resources below, you can unzip the folder and locate the file called MB-purefront.psd to follow along.

The mockup file we’ll be modifying will only need editing once. Afterwards, you can use the same file to obtain all of the examples in this post using nothing else than Divi and Divi’s built-in options.

Once you open the MB-purefont.psd file, the first thing you will need to do is merge the Device folder by right-clicking on it and selecting ‘Merge Group’. 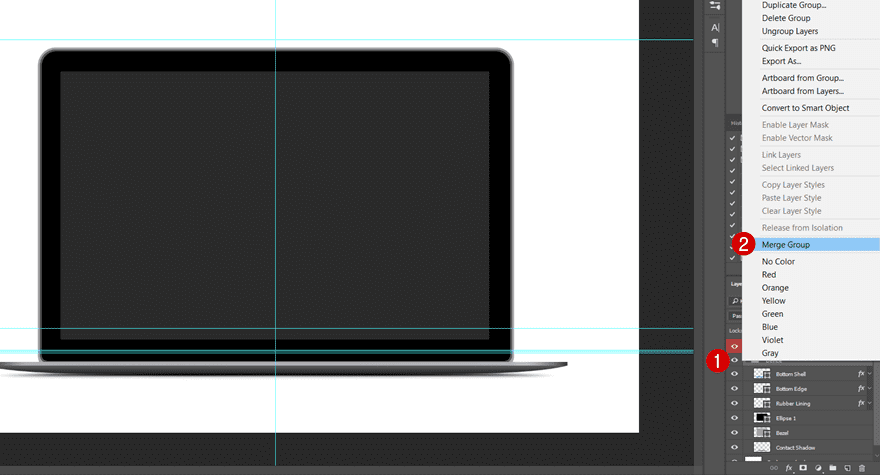 Once you’ve done that, you can press control or command and click on the screen layer. By doing this, you will select the screen part of your mockup.

While having the screen selected, click on the Device layer and add a layer mask to it.

Control/Command+ i to Inverse

Immediately after adding the mask, press control or command and ‘i’ to invert.

To make that happen, press control or command and click on your screen layer again. The screen area, will again, be selected.

Then, while having the screen layer selected, click on the Background layer and add a mask to it.

Control/Command + i to Inverse

We’ll need to invert the background layer as well so go ahead and press control or command and ‘i’. This will allow us to have a transparent screen while having the surrounding background remain white. The reason why we’re not making the whole image transparent is to make sure the image or video we’ll add within the Divi builder doesn’t appear anywhere else but on the screen.

The last thing we’ll need to do is crop the image. Without cutting off anything from the mockup itself, try to reduce the white background as much as possible. This will help us make sure that the image or video we’ll be adding within the Divi builder doesn’t get lost in the white background. 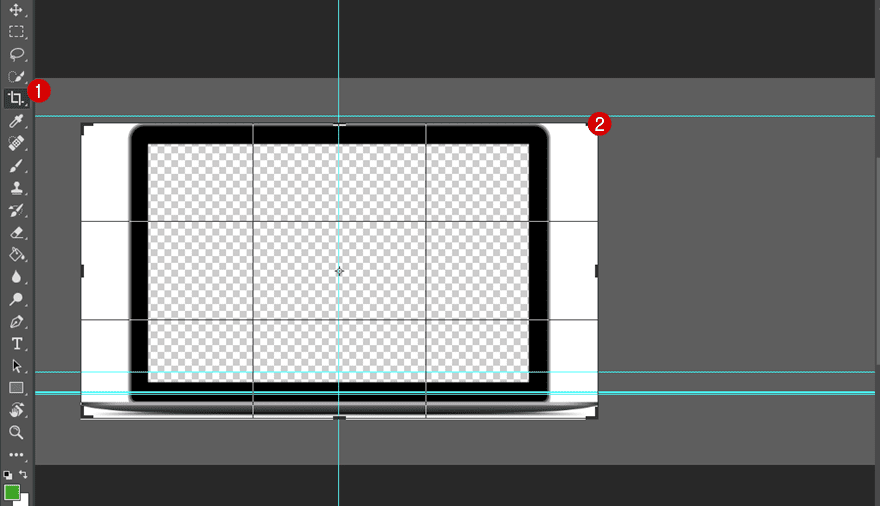 Now that the image is done, you can save it for web by going to Export > Save for Web. Make sure you’re exporting a PNG image so the transparent background will remain. 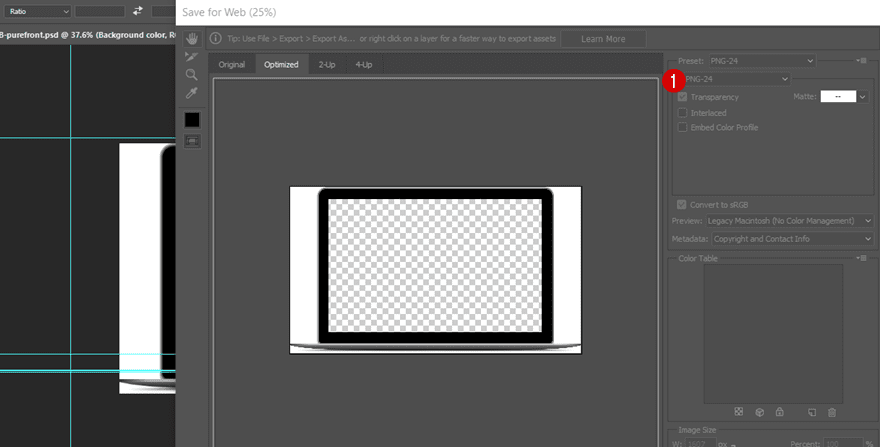 To make this tutorial as easy as possible, we’re going to show you the row settings for each one of the first four examples in advance. The fifth one, however, will need other settings. We’ll handle these different settings once we come across the fifth example in this post.

For each one of the first four examples, we’re using a row with one column only.

The first example we’ll show you how to recreate allows you to add any type of image to your mockup and modify its colors. You will only need the modified mockup once. From that point on, you can reuse the mockup as many times as you need to add different images or screenshots to it.

Start by adding an Image Module to your one-column row and upload your mockup image.

Then, open the Background subcategory within the Content tab and add a background image with the following settings: 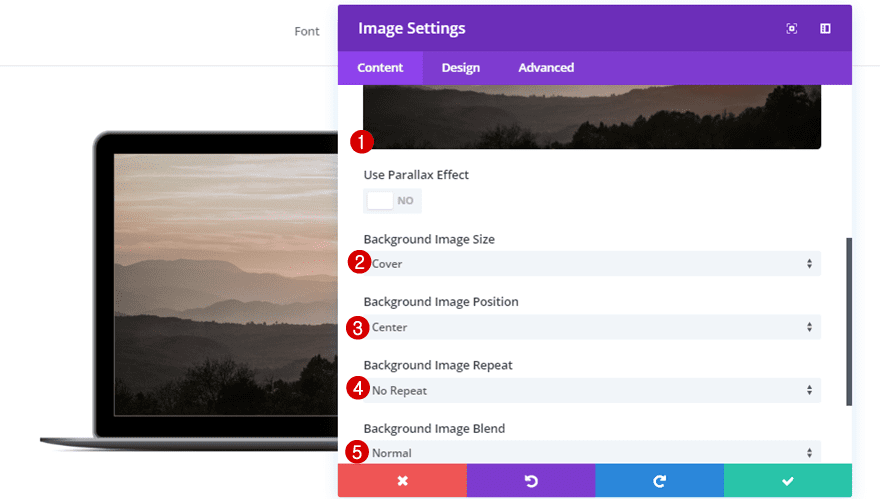 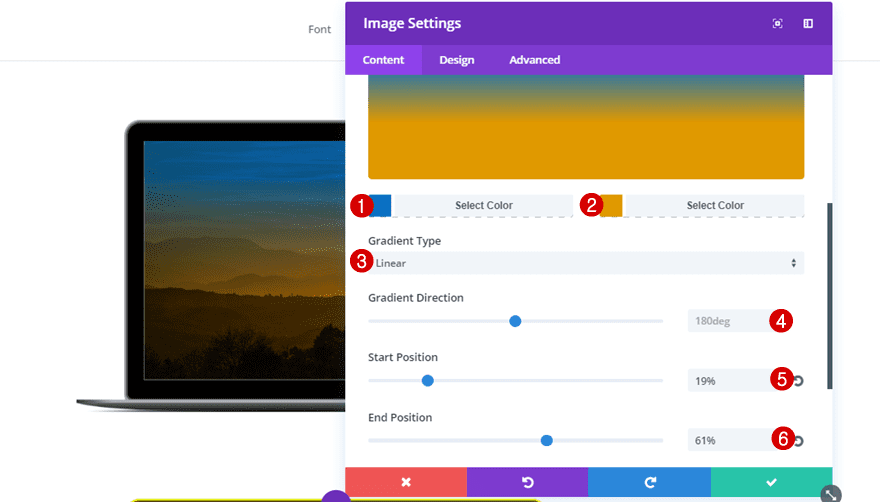 To add the gradient background to your background image, select ‘Multiply’ as your Background Image Blend.

Use  Filters if Needed

Another option you have is applying filters to your image by going to the Filters subcategory of the Design tab. For the example below, we’ve made the following modifications: 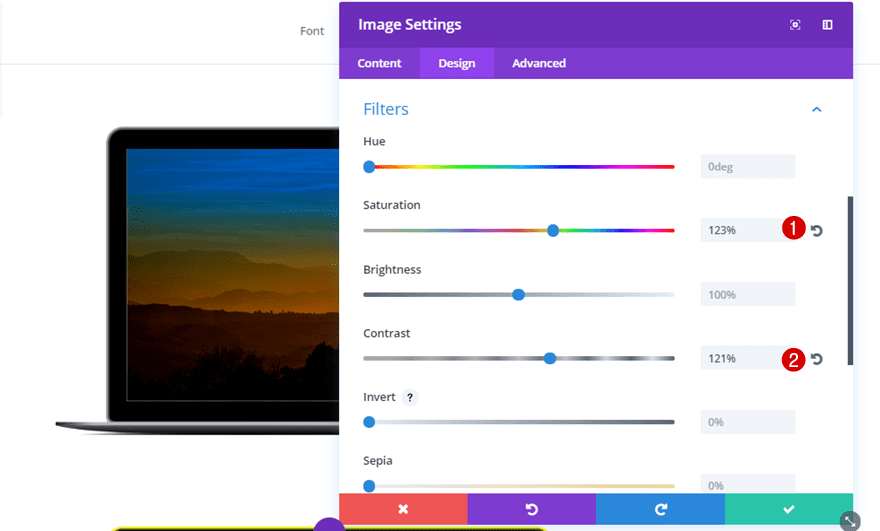 Start by adding the following gradient background to the column of your row: 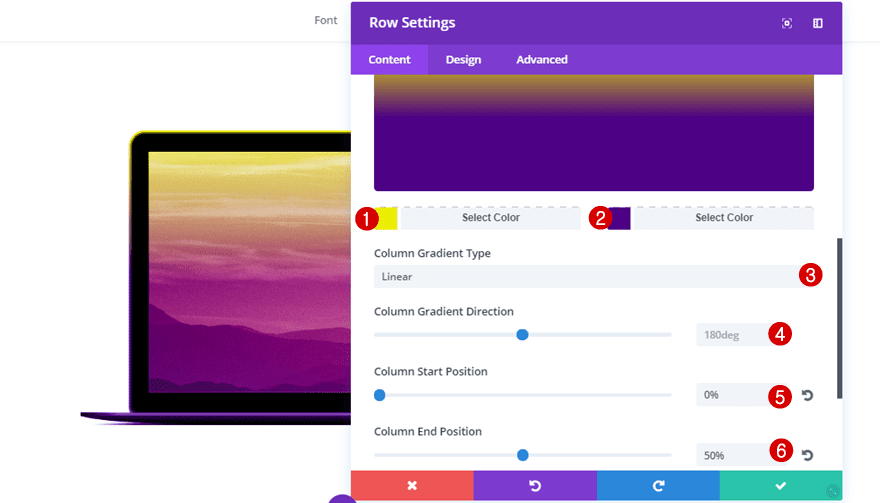 Then, add an Image Module and select the mockup once again.

Next, open the Background Subcategory, upload the background image, enable the ‘Use Parallax Effect’ option and select ‘CSS’ as the Parallax Method.

The last thing you’ll have to do is change the Blend Mode of the Filters subcategory into ‘Hard Light’.

For the next example, we’re simply going to add a video to the mockup instead of an image. You can add all kinds of videos to the mockup, a screen capture being one of them.

Again, start by adding an Image Module and selecting the mockup we’ve created with Photoshop.

Then, add a video to the Background subcategory of your Image Module and you’re done!

The next example we’ll be recreating consists of a video background in combination with an image background that changes the look and feel of your mockup.

Start by opening your row settings, add a background image to the Background subcategory and use the following settings for it: 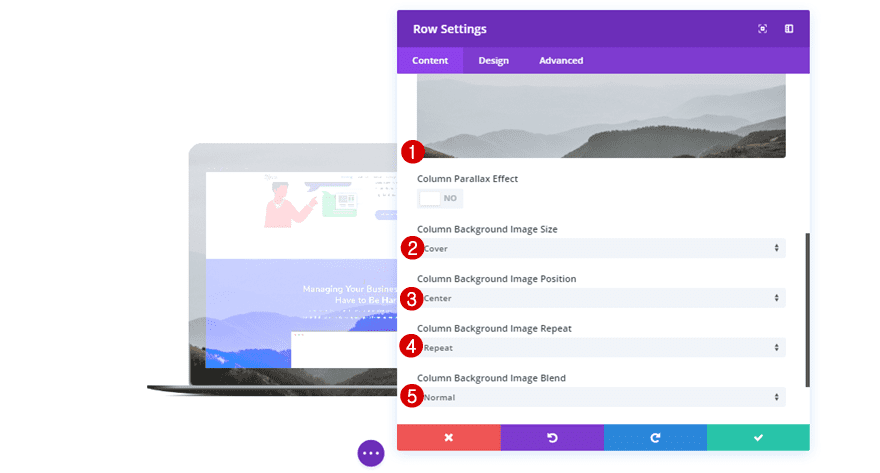 Then, add an Image Module with the mockup we’ve created in the Photoshop part of this post. 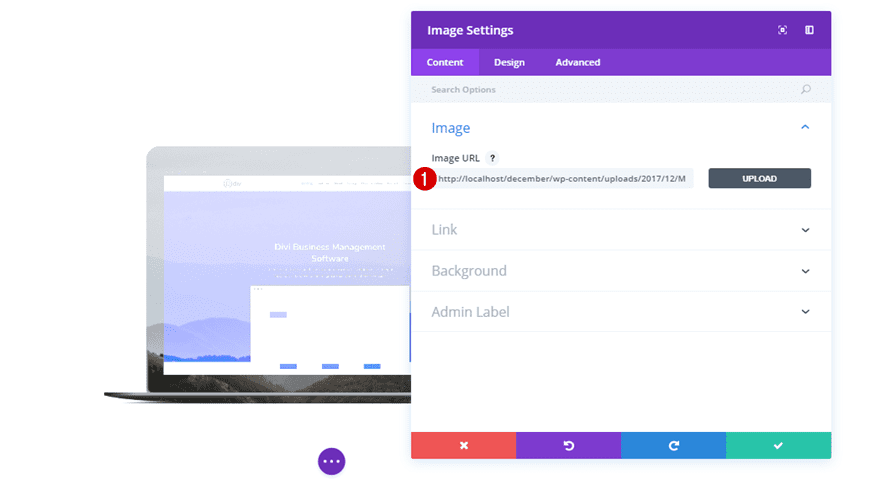 Next, add a video background to the Image Module. 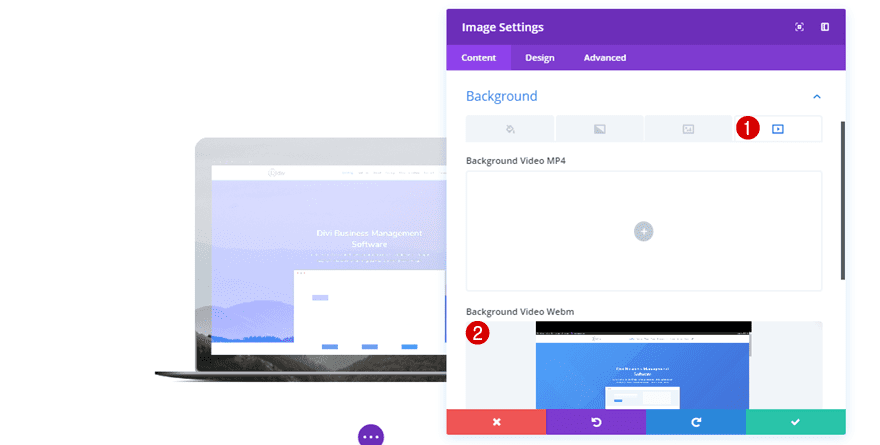 And lastly, enable the ‘Lighten’ Blend Mode within the Filters subcategory of the Image Module. 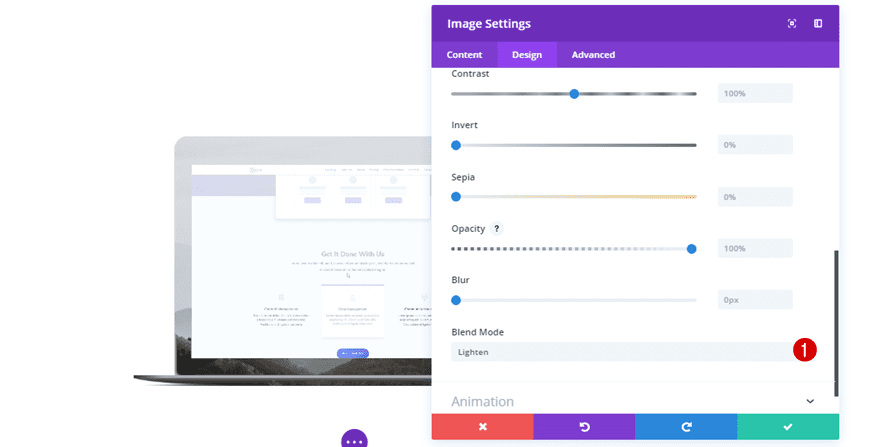 The last example we’ll be recreating allows you to add a background image that takes up the whole width of the screen. The displayed mockup has a video background as well which blends very nicely with the image background that is being used.

The row for the last example has slightly different settings. Start by choosing a row with one column.

Then, add a background image to the column with the following settings:

Next, open the Sizing subcategory of your row and apply the following changes:

Once you’re done with the row settings, you can add an Image Module and select the mockup we’ve created in the Photoshop part of this post.

Then, add a video to the Background subcategory of the Image Module.

Last but not least, select ‘Multiply’ as the Blend mode within the Filters subcategory of the Design tab and you’re done!

In this post, we’ve shown you 5 awesome ways to add images and videos to your screen mockups. We started off by showing you how to make some modifications in Photoshop to a mockup file which you can download for free and continued by showing you how you can modify that mockup file within the Divi builder to show all the image or video content you want to share with your visitors. If you have any questions or suggestions; make sure you leave a comment in the comment section below! 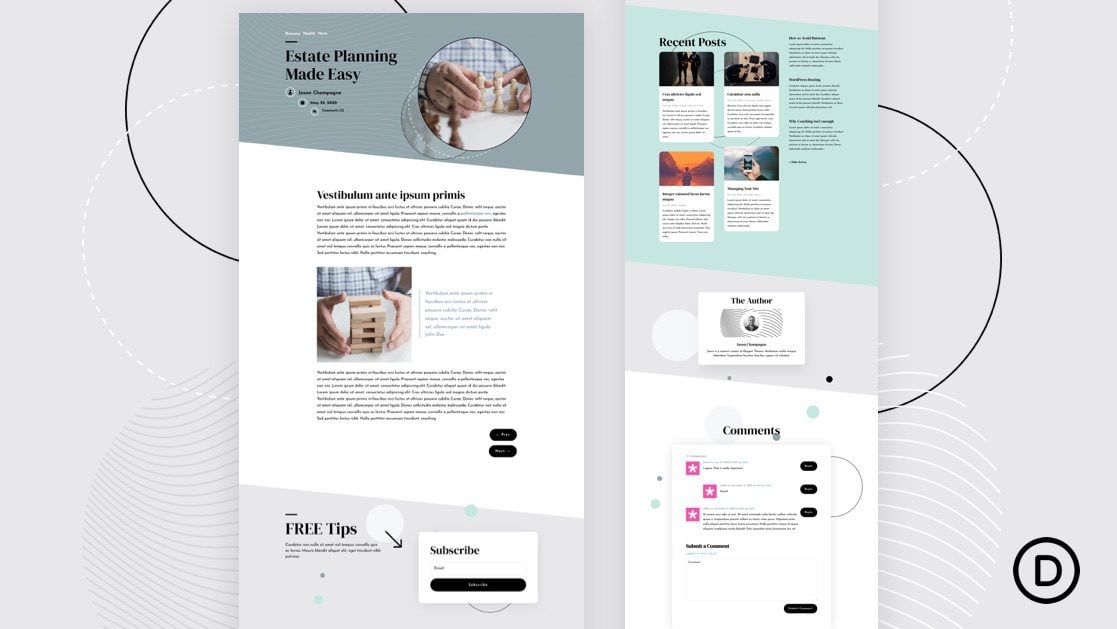 Posted on June 23, 2021 by Jason Champagne in Divi Resources

Hey Divi Nation! Thanks for joining us for the next installment of our weekly Divi Design Initiative where each week, we give away brand new freebies. This time around we’re building upon the Estate Planning Layout Pack with a brand new blog post template that matches the rest of pack... 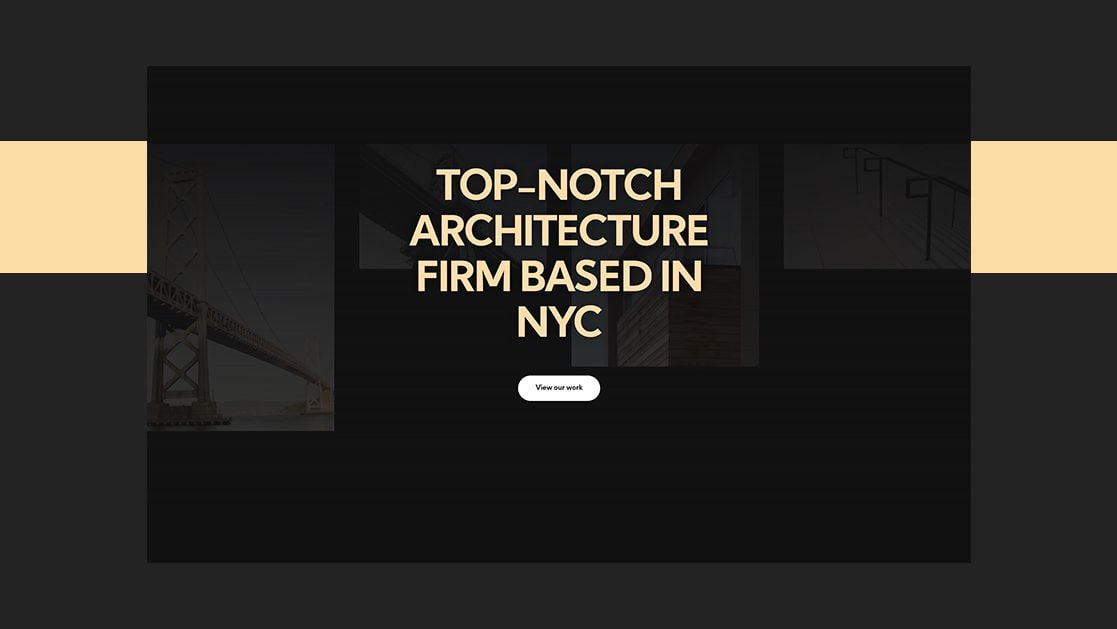 Creating a hero section that catches your visitors’ attention can set the tone for the rest of the website. If you’re looking for a creative way to use Divi’s sticky options to help you get there, you’ll love this tutorial. Today, we’re showing you how to reveal an... 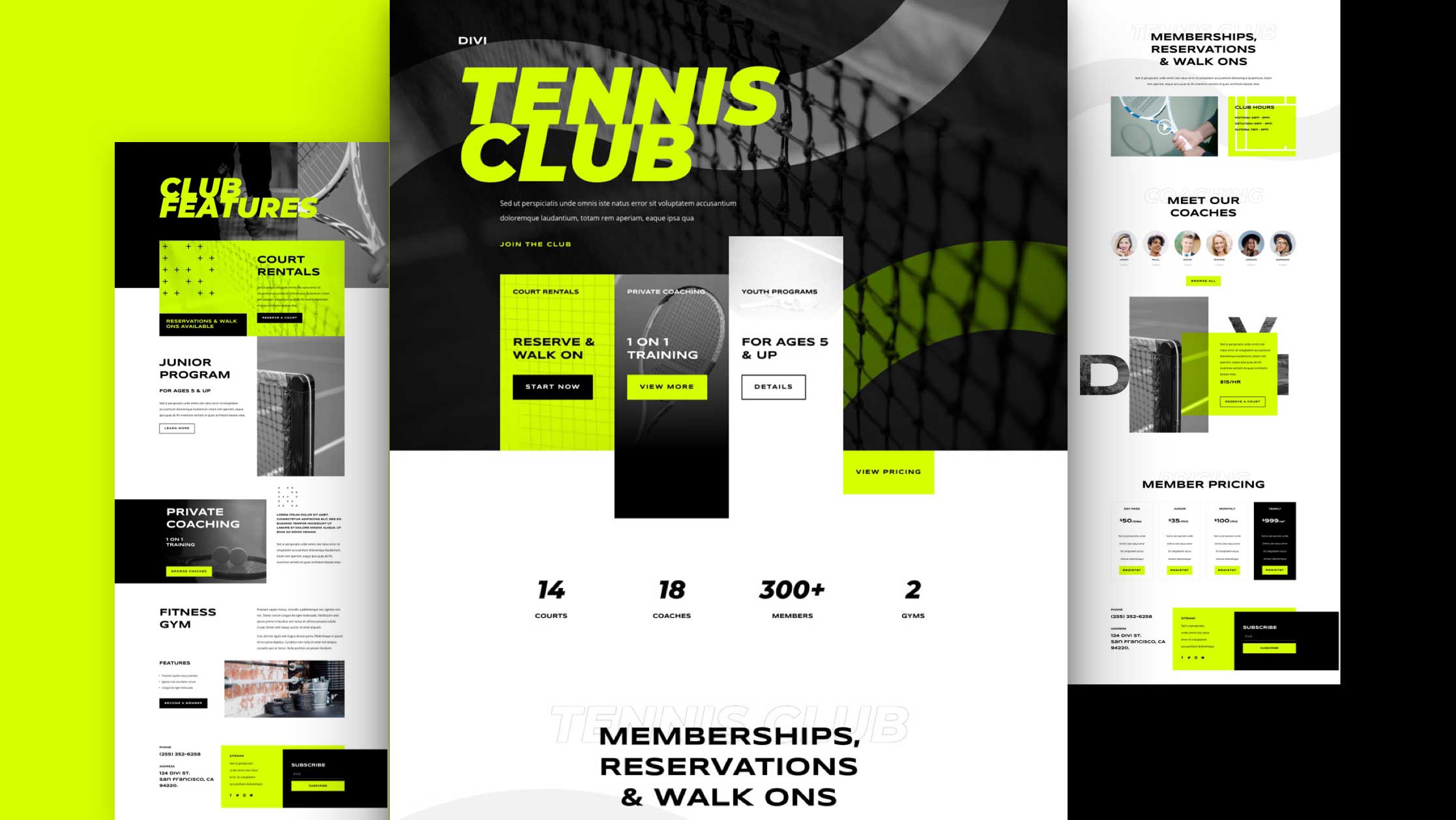 Get a FREE Tennis Club Layout Pack for Divi

Hey Divi Nation! Thanks for joining us for the next installment of our weekly Divi Design Initiative where each week, we give away brand new, free Divi Layout Packs from our design team to you. This time around, Kenny and his team have created a beautiful Tennis Club Layout Pack that’ll help...