How to Monetize a Podcast

Podcasting is attracting a lot of attention. In 2019, the podcast advertising is projected to exceed $470 million dollars. A lot of people see that number and want their share of it. They start a podcast, make fantastic content, but the dollars don’t roll in. Like blogging, there are some tried and true methods of monetizing a podcast that can help you rake in dollar upon dollar. We also want to touch on some of the lesser-known methods of podcast monetization that could get you an edge up and push you closer to being the next Joe Rogan or Marc Maron.

Let’s start with the most basic kind of monetization: running ads. When it comes to podcast advertising, companies and brands generally pay $X per thousand listens. Typically, this rate is called the CPM, and as you can see in the image above, Anchor (a podcasting host) is paying $15 CPM. They track listens, and the podcaster earns that rate as their ad is played. In this case, the rate scales so if the podcast only ever gets 500 plays, the podcaster still earsn $7.50.

Some sponsors that utilize the CPM advertising model pay based on average expected downloads for the episodes they are to be featured in. For example, if a podcast receives an average of 5,000 downloads per episode, a sponsor might still pay $15 CPM. But they do so upfront, regardless of the actual downloads on that episode. It might go up to 10,000 making their ROI even better, or it be an under-performing episode and only get 3,000 downloads. These kinds of sponsorships tend to look at the trends of multiple months’ worth of episodes to make a decision on the total CPM they pay for.

Additionally, if you’re looking to run ads, you should be aware there are two different kinds of ads that you can run in three different spots on your show. Each of which might generate a slightly different rate from the advertisers.

With all of these variables in mind, you can see why ads and sponsorships are so lucrative for podcasters. However, since they’re done CPM, you have to get a large number of listens per episode to really make them financially viable as a career. Any money is better than none, though, and CPM ads are a fantastic way to cover hosting expenses and other costs that you might incur while podcasting (read: lots of new mics and mixers and DAWs). 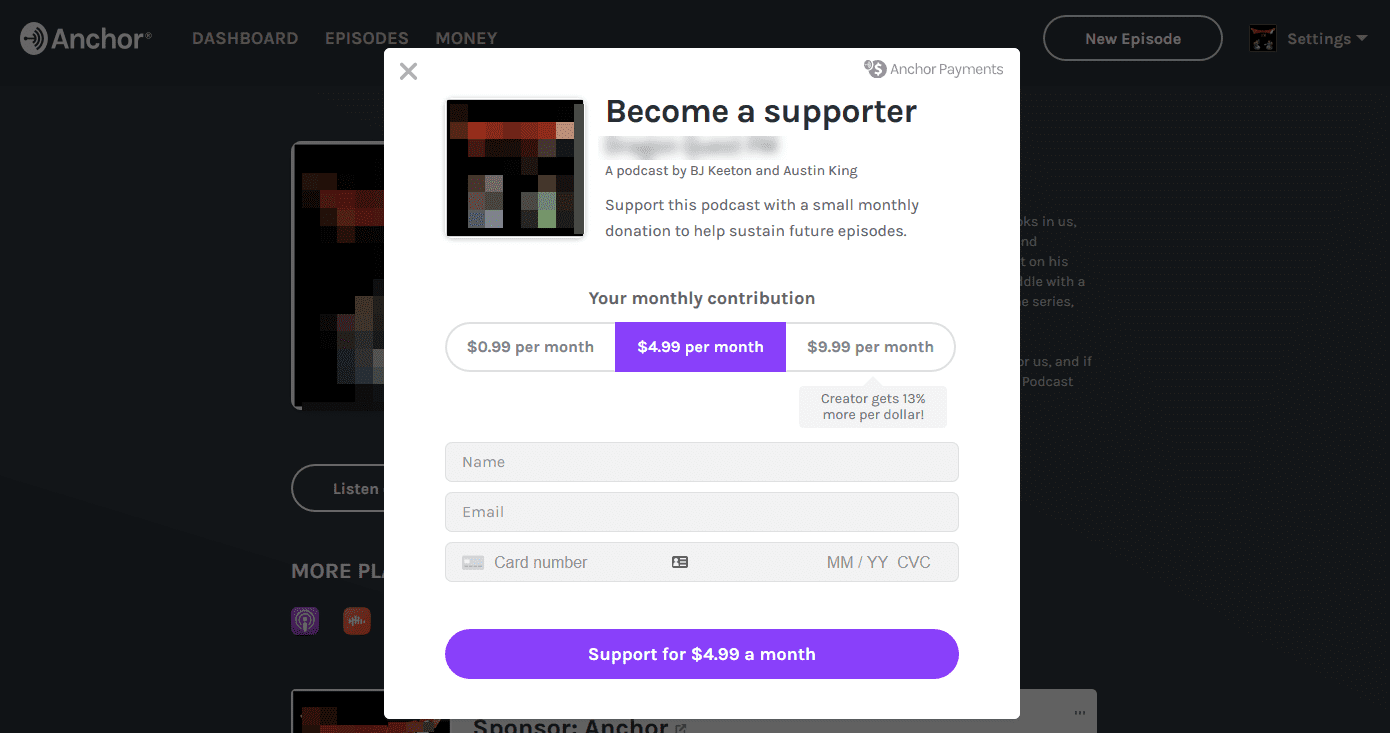 Maybe the most popular way for how to monetize a podcast, listener support is exactly what it sounds like. Your listeners donate to your show. They give you money because they like the content you’re creating and want you to continue creating it. Since podcasts tend to be free, users often have no problem tossing a dollar (or twenty) to a show they listen to week in and week out.

As a podcaster being supported by fans, you can make a lot of money this way. If you build a community who loves you and your content, they collectively can give thousands of dollars each month. However, there are pitfalls to the listener support method of monetizing a podcast. The primary being that you’re at the mercy of your listeners and their good graces. The income isn’t stable, and you can’t 100% count on anything month-to-month.

A secondary concern is that asking for support feels kind of ooky for some people. They may feel as though they’re asking for a handout. Podcasters don’t want to sound like they’re begging or that they are being shameless or too self-promotey.

Despite those qualms, though, listener support is one of the top methods of revenue or monetizing podcasts. Because of that, many platforms have opened up to streamline the process for listeners. After all, the less friction between the listener and the podcaster, the more likely they are to finish out the transaction (the same applies to ecommerce shops, too, so remember that).

While there’s no way to do an exhaustive list, we are going to highlight some of the more popular listener support platforms out there.

This one is a controversial move. Very controversial in some cases. The most popular kind of podcast is the one-on-one interview. People adore them. They get to hear from lots of different perspectives on a lot of different topics, and it keeps the content varied and helps it not grow stale.

If you’re a really good interviewer and your show gains popularity, booking guests might move from you having to go out and pitch your show to guests to your guests pitching themselves to your show.

And while that is a fantastic transition, the issue of time and scheduling comes in. You will probably have more guest options than you have podcasts or time to record them. So you have to start saying no to people. So you have to start cherry-picking the guests who you have on your show. That is hard work. And time consuming.

That’s when selling guest appearances comes in. In order to make the whole process worth your time, you will charge people an appearance fee to be on your show. What this does is twofold:

Even if the fee is as low as $10 for an appearance, that’s enough friction to keep the people who aren’t really interested out of your inbox. As you move up the pricing tiers, though, you can make some serious money if you do this right. Let’s look at one real life example before moving on:

John Lee Dumas runs the Entrepreneurs on Fire podcast, an absurdly popular business podcast that reaches over 1 million people per month. And he charges guests $6,500 per episode. Yes, that is six thousand five hundred dollars. Per guest. He does 4 episodes each month, which means he’s grossing $26,000 from podcast guests alone.

The copy on his guest appearance application says (emphasis mine),

Entrepreneurs on Fire is a top ranked and award winning Podcast with over 2000 episodes to date and over 1 million listens a month. With 400+ applicants per month for 4 interview slots, the competition is FIERCE and we’ve implemented an appearance fee to ensure that only Entrepreneurs who are truly ON FIRE will apply. Good luck!

Now, can you even imagine the number of applications that EoF staff would have to churn through to find quality guests if there weren’t a barrier there?

Admittedly, most people couldn’t get away with charging guests $6,500. (But if you can, we are so happy for you!) Even if you charge $100 as an appearance fee, the quality of your guests would likely rise, and you’d be bringing in a considerable amount of revenue to your show for doing literally nothing differently than you were already doing.

A Word of Caution

If you decide to implement a guest appearance fee, be aware that some listeners might see your show as an infomercial or advertisement for that product, person, or brand. Hopefully, it won’t be. To combat that perception, it will be up to you to foster trust between yourself and the audience and still only approve guests who meet the standards of your show. Just because someone is willing to pay an exorbitant price doesn’t mean they are a good fit for your show’s listeners.

As long as you keep them in mind and run your show as you always have, you’ll be doing absolutely nothing unethical (or even ooky). But there’s a fine line there, so we wanted to make sure you considered it.

And then there’s the great option of selling merch. Physical merchandise is a huge boon to podcasters because not only does it give your most dedicated fans something tangible to add to their collections, but it also gives you a passive advertising stream. Sell shirts and anytime they are worn, people see your logo, name, URL, whatever. Same for totebags and shower curtains. (Sites like Society6 do allow for custom shower curtains!)

While tees tend to be some of the best selling items, there is a never-ending plethora of items that you can push on your merch-loving listeners. Totes work well, as we mentioned above, and drawstring bags sell like they’re going out of style (they’re not). You can do travel mugs, too, which are great for even yourself because you can bring them to meetings and conferences and get seen.

But that’s not even mentioning what might be the most important merch of all. 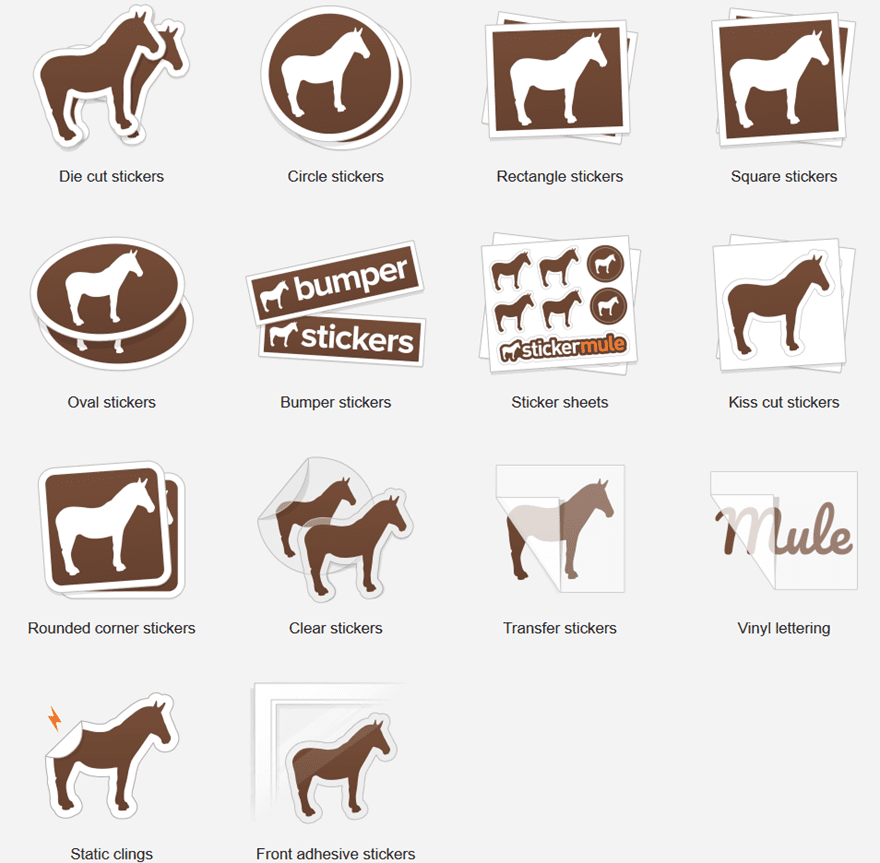 Everyone loves stickers. Go to a conference? Stickers everywhere. Go to a coffee shop? Leave stickers on the table. Want to run a contest? Give away some stickers as prizes. People will love them. We don’t know what it is about stickers, but there’s something there. And people love them. They’re cheap to produce (you can get them for $0.25-ish each), and even if you sell them for $1-2, there’s a huge markup there.

And if you don’t want to be the one to have to deal with mailing them out and handling the merch yourself, sites like Redbubble, Zazzle, Society6, and so on can work as an intermediary. You upload your designs (or logo), and they send you money as people buy your stuff.

Merch is easy to promote and can be a pretty good passive income stream. As long as you engage your listeners and engender true fans. Which you’re already doing. So merch is a no-brainer way how to monetize your podcast.

That is absolutely not an exhaustive list of ways to monetize a podcast, but it’s the 4 best ways that almost anyone can do. So if you’re interested in making a living from your podcast or perhaps just breaking even on expenses, these are the tried-and-true ways of doing so.

How have you monetized your podcasts? Let us know in the comments! 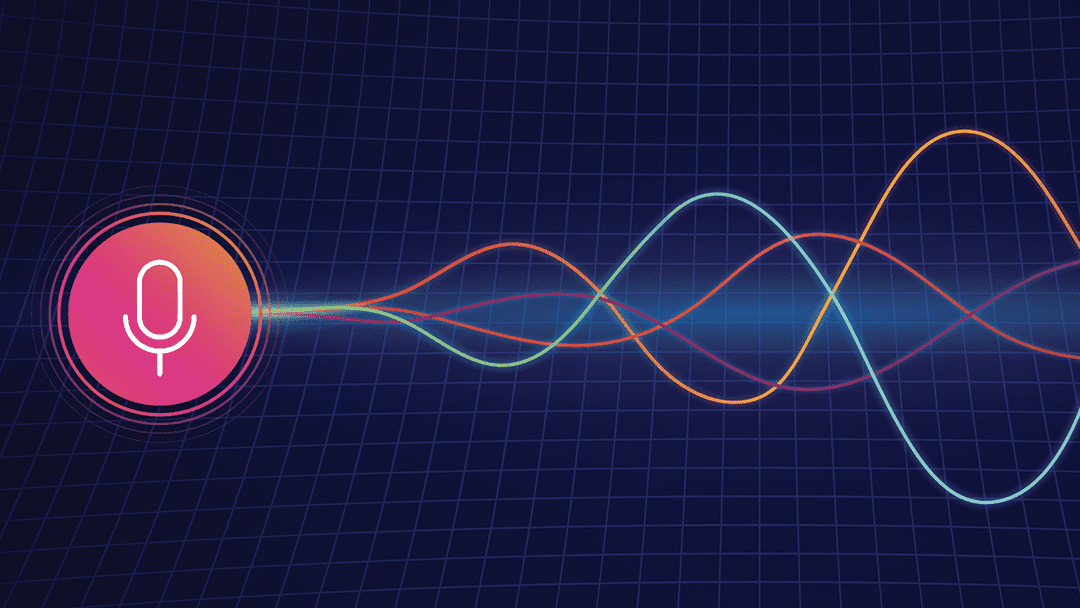 Posted on August 2, 2020 by Haley Walden in Business 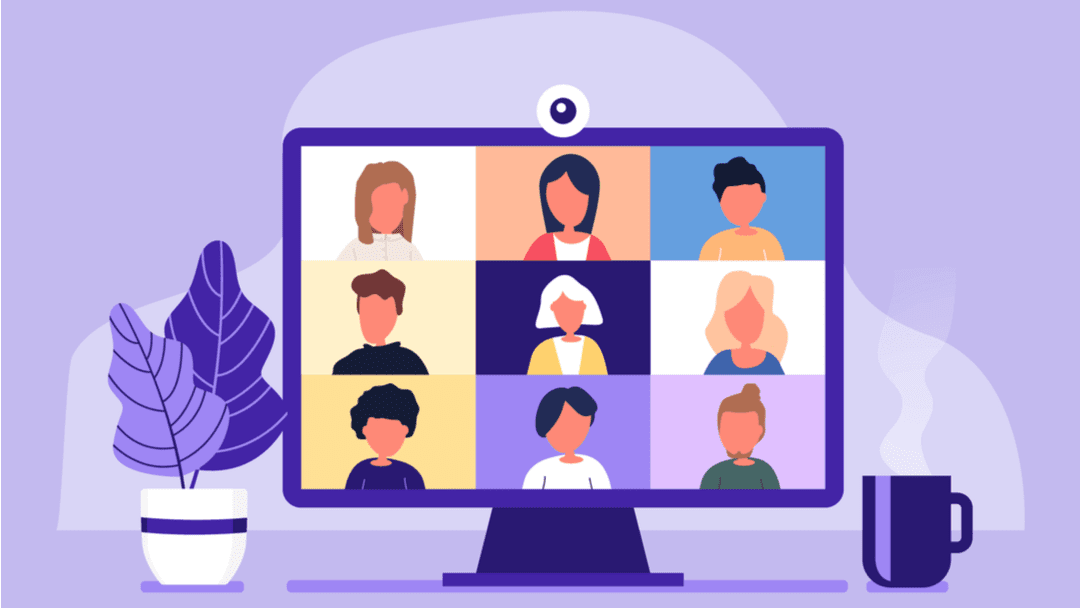 How to Look Good on Zoom: What to Wear and Where to Sit

In the wake of COVID-19, video conferencing has made the transition from office to remote work much easier for many teams. However, virtual meetings have their own unique etiquette you’ll need to internalize. Plus, it can be difficult to figure out how to look good on Zoom if you’re not... 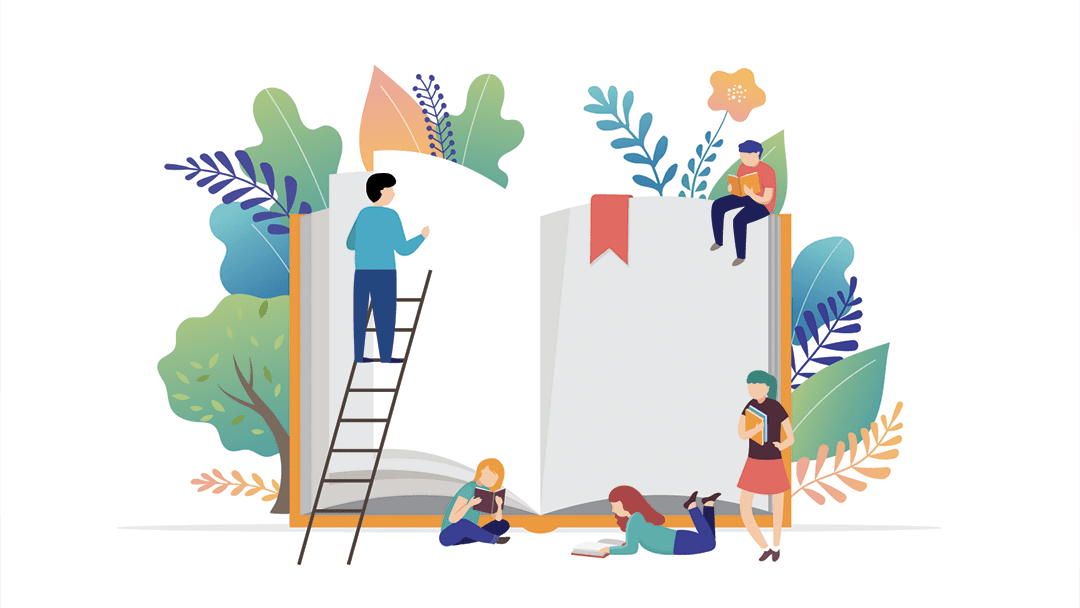 Over the past several years, mindfulness has arisen as a practice many professionals recommend to combat anxiety and burnout. Mindfulness is easy to incorporate into your daily routine. That’s why we’ve compiled eight of the best books on mindfulness every professional should check...