WordPress 5.8: What’s New in this Major Update to WordPress Core? 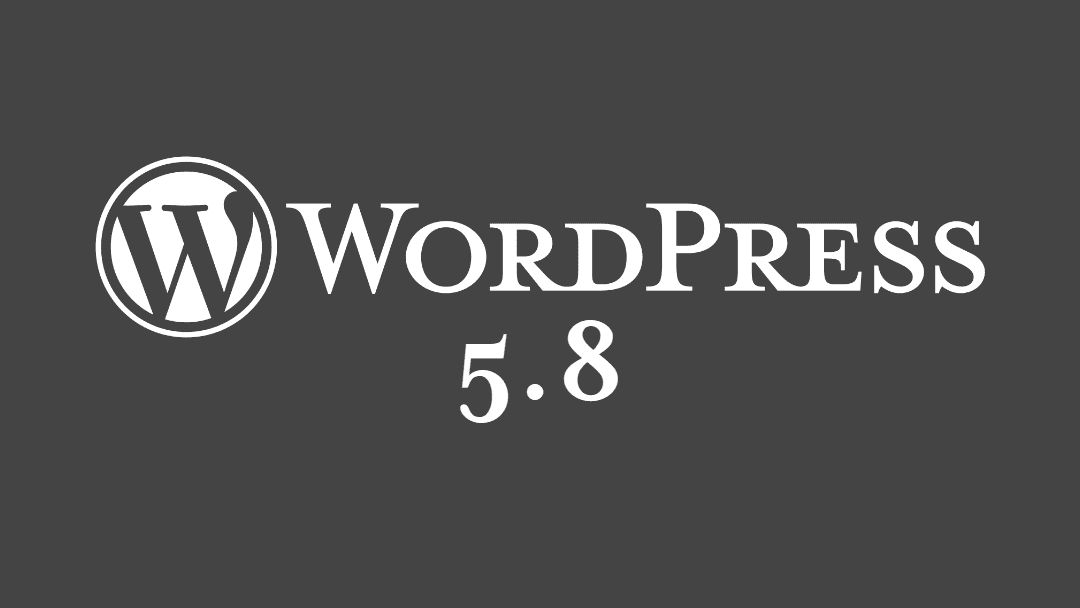 WordPress 5.8 is a major milestone in the modern WordPress development cycle. Ever since WordPress 5.o and the inclusion of the Gutenberg block editor as the default post/page editor, the Core team has been moving toward full-site editing using that software. WordPress 5.8 includes the first public iteration of that feature. The update also includes additional block settings, media library changes, and some really nice quality-of-life improvements for WordPress developers.

At the top of the list are the Gutenberg changes. You can now edit Widgets to include Gutenberg blocks, and the Theme Customizer (found under Appearance – Customize) is now also open to block inclusion. This is a major deal, as previously, widgets and the theme customizer were generally the domains of plugin/theme developers only. Or specialized themes such as Divi which have theme builders that allow for non-content-area customization (which are still more powerful than Gutenberg’s newest options). 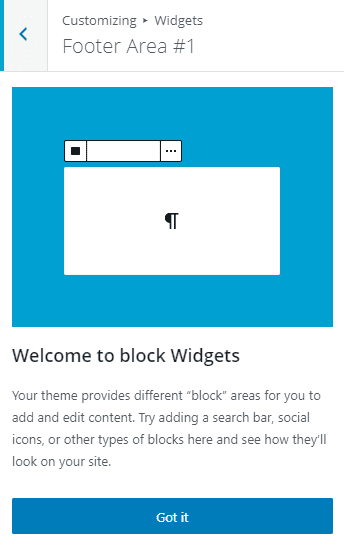 The ease of use is exactly the same as the Post or Page editor. Go into the Widgets section of the customizer and press the + button. You will choose a block or blocks from the menu and work with them as you would any other piece of content. 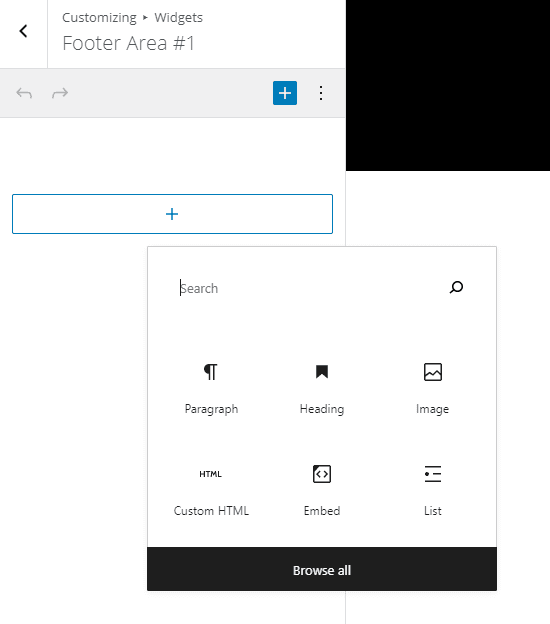 You do not lose access to current widgets. WordPress now calls them Legacy Widgets. Just go to Appearance – Widgets and the new Legacy Widgets block will give you a dropdown list of what you have installed. You can also opt out of the new block widgets by installing the Classic Widgets plugin. That keeps things as they have always been.

With WordPress 5.8 comes a slew of new blocks to make full-site editing possible. You can find them under the Theme header in the block editor when you add a new element. Additionally, the Design header has a number of new blocks that complement those, too.

These are the new blocks that WordPress 5.8 adds.

That is a lot of new blocks to take advantage of theme and widget customization. These blocks will give you a great deal of control as to how your content appears on your site. Other site builders are still stronger, but this goes a long way to showing users the ease and power of full-site customization.

You also have access to a few more design options for your content in the block editor. For images, you now have a consolidated edit section that includes existing tools such as Crop and Add Text Over Image, but you can now use Apply Duotone Filter to easily bring color and dynamism to your posts and pages. No need for an external editor.

You also get a List View that gives the overview of the page structure, suggested patterns for blocks to guide you to better page designs. 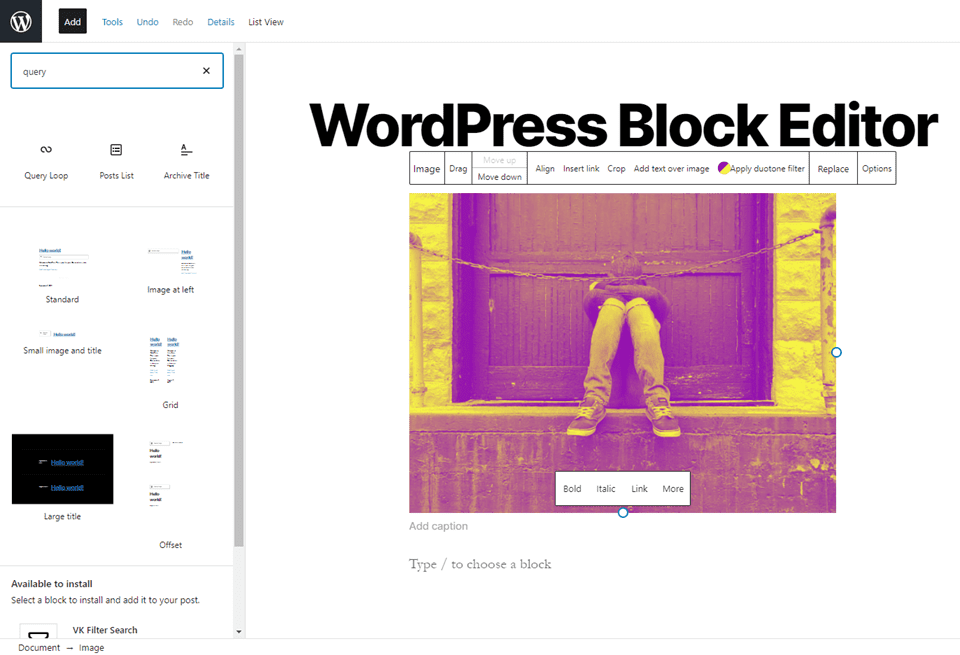 Leaning into this, the Add Block menu now also provides suggestions for other patterns and designs. This might be an indication of user-produced produced patterns being introduced, much like Custom Blocks can be created.

Multiple features that theme and plugin developers will care about have been introduced, too. The first being that theme.json is now used to control Global Styles and Global Settings APIs. Per the documentation, “this configuration file enables or disables features and sets default styles for both a website and blocks,” and there is a full dev note for anyone interested in digging in deeper.

Devs can also rejoice in the new Supports that WordPress 5.8 introduces. New blocks are now supported via API, as well as color, filters, and values for theme.json. Additionally, various features from WordPress 5.7 have been stabilized and are no longer experimental.

An asterisk should be placed by any dev’s list of browser tests to indicate that “support for Internet Explorer 11 has been dropped as of this release.” If you or any of your clients have users who visit with predominantly IE11, they might see some breakage as time goes on and you begin using new features in WP 5.8.

One of the highlights for everyone, dev and user alike, is that WordPress now has native WebP support. Previously, it took specialized plugins to deliver the image format to users. If you’re not familiar, WebP files are compressed images that are much smaller than typical images that websites serve (JPG and PNG). In essence, WebP can make your website load faster without taking any additional steps. And with the format supported by all major browsers now, this is one of the most important changes. Especially as devs work to make their builds faster and faster.

On top of the WebP delivery, the WordPress media library gets a few adjustments in 5.8, too. The big news is that users no longer have to deal with long load times because of the default infinite scroll. Now, you will need to press a Load More button to initiate an AJAX call for more images. This new method may take some time for some users to adapt to, but it definitely improves load times in the admin dashboard. 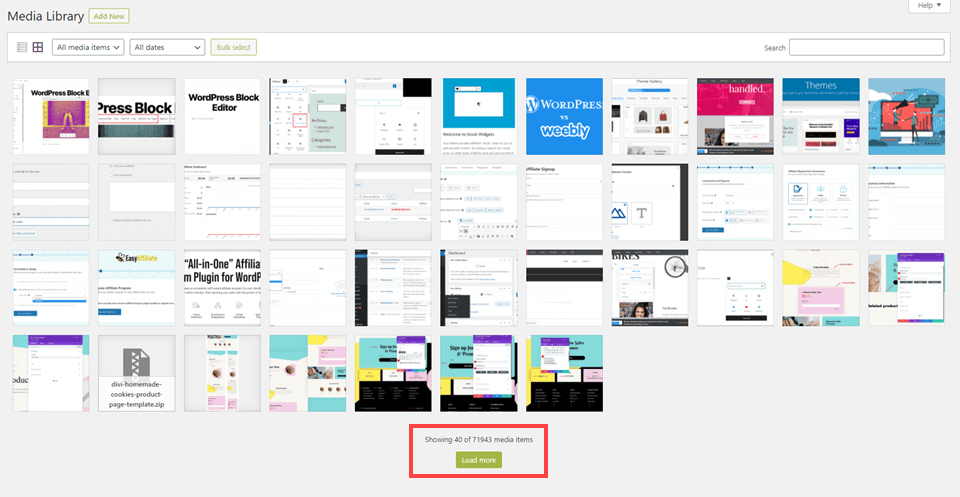 WordPress 5.8 also adds a small button to the image upload tool. Whenever you upload a new image, WordPress has a button to copy the direct link to that image.

This is a small change, but one that will save many users extra clicks that add up over time. The WordPress media library has never been the smoothest part of the platform, and small QoL improvements like this move it forward bit by bit.

Wrapping Up with WordPress 5.8

WordPress 5.8 implements over 170 bug fixes, 96 enhancements and feature requests, and 24 misc. tasks from the Core repository. From new block widgets, WebP, editor updates, tons of new blocks, and developer options like theme.json, this update does a lot to enhance WordPress. Not only will we be digging in more deeply with some of the 5.8 changes in upcoming articles, but the fine folks at Make.WordPress.org have put together an extensive field guide to help you navigate the numerous changes that came with WordPress 5.8.

What has your experience with the WordPress 5.8 update been so far?