Readability Score: What It Is, Why It’s Important, & How to Get a Good One on Every Post

Blog / Tips & Tricks / Readability Score: What It Is, Why It’s Important, & How to Get a Good One on Every Post

If you’re like most people on the Internet, you’re not going to read this post word-by-word. In fact, as little as 16% of people actually read content word-by-word. Yoast SEO’s readability score is, in part, a response to that data.

While there are plenty of different tools and tests that purport to measure a piece of content’s readability score, Yoast SEO’s feature is the one that most WordPress users are familiar with.

To that end, I’m going to dedicate this post to exploring that specific feature of Yoast. I’ll tell you why you should care about readability, what goes into Yoast’s score, and how you can improve your own Yoast SEO readability score.

Readability is roughly defined as “how easy it is for someone to read a piece of content.”

Because most people aren’t going to painstakingly go through and read your content word-by-word, you need to make it as easy as possible for people to quickly comprehend your content.

For that reason, readable content is all about improving the usability of your website. Nielsen Norman Group actually dug into this issue with hard data and found that the two biggest single contributors to usability when it came to content readability were:

Yes, the English professor in you might cringe. But if you want to make your site more usable and increase the number of people who read your content, you need to, in the words of Pamela Wilson, “Accept that people scan web pages, rather than reading them in detail, and work with this reality rather than fighting it.”.

Neil Patel and Brian Dean of Backlinko take this concept to its extreme by writing almost exclusively in single sentence paragraphs: 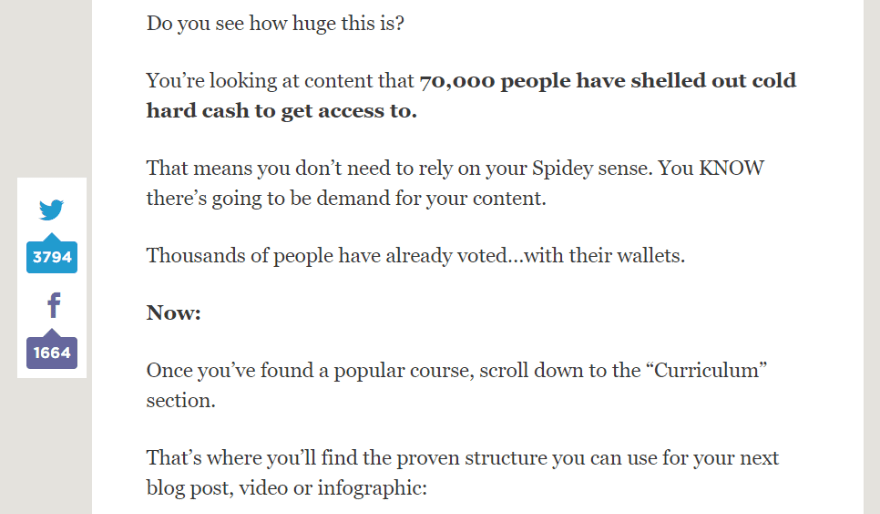 It’s Google – so the only way to know the true answer is to ask a Google Engineer. But, beyond a cryptic Tweet, there’s no evidence that readability directly affects SEO.

While that’s true, there are plenty of indirect ways in which making your content readable can boost your site’s ranking. It’s not hard to believe that readable content is more likely to:

What is Yoast’s Readability Score?

A quick refresher for the uninitiated:

By default, there are two tabs in the Yoast SEO meta box that’s attached to every post. You have the default SEO tab, which is directly focused on measuring how well optimized your text is for a focus keyword (as well as smaller functionality like cornerstone content).

Then, you have the Readability tab: 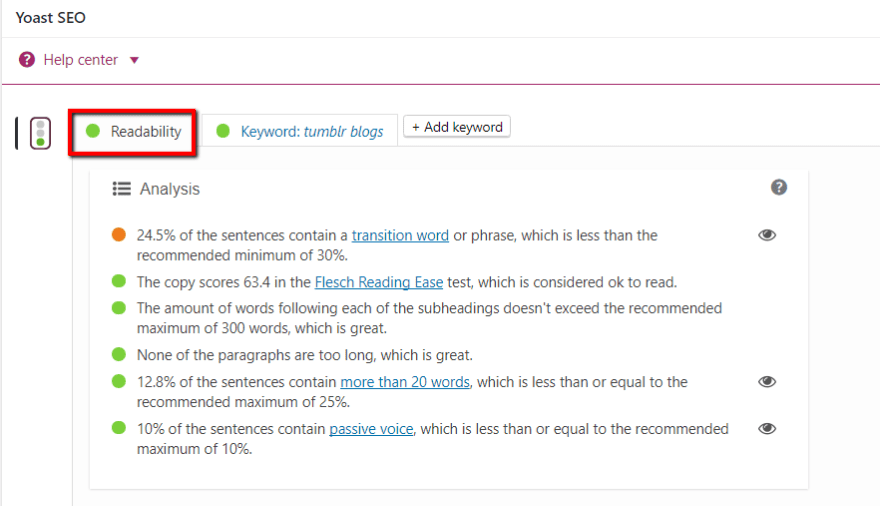 It ranks your content on a variety of criteria to come up with a simple rating based on the same scale as Yoast’s SEO analysis. That is:

How Does Yoast SEO Determine Your Readability Score?

Yoast SEO’s readability tab attempts to sum this concept up into one single score by looking at 6 different readability checks:

In addition, you’ll also get dinged if you use more than three sentences in a row that start with the same word, though this check doesn’t show up by default.

The first five criteria should feel familiar. I doubt you need me to explain the concept of sentence length. But I’m guessing there’s a good chance you haven’t heard of that sixth test – the Flesch reading ease test.

The Flesch reading ease test calculates a score based on the number of words per sentence, as well as the number of syllables per word. With this test, higher scores are considered easier to read.

The results and calculation method are summarized below in a table from Wikipedia:

How to Get a Good Yoast Readability Score

Ok…so how can you actually improve your Yoast readability score to go from OK or Needs Work to Good?

Before I get to the tips, let me lead with a caveat: Don’t be a slave to the Yoast readability score.

For example, if you’re writing to an academic audience, you’re probably never going to get a high Flesch score (nor should you necessarily try to). And there are actually some situations when passive voice is useful.

Try to make everything green as much as possible, but accept that there are some situations where it’s ok to break the rules.

Because sentence length affects your readability score both directly as well as indirectly (as part of the Flesch test), it’s one of the biggest areas you can improve your score.

Just plain writing shorter sentences is obviously one way. But another trick is to break your sentences in half at transition words.

See how I just did that?

I could’ve just as easily thrown in a comma and tacked on another clause. But breaking the sentence into two parts both makes it more scannable and improves your Yoast readability score.

Just watch out that you don’t go too far and turn your content into a choppy mess. Moderation is key.

Because Yoast will penalize you for going more than 300 words without a subheading (and because subheadings really do make your text more readable), you need to learn to love the H3 heading.

H3 headings are perfect for when the point isn’t unique enough to warrant its own H2 heading, but you still want to break it into its own contained section. For example, each one of those tips is an H3 subheading contained inside the H2 heading that is “How to Get a Good Yoast Readability Score”

As I said, passive voice has its uses. But when you’re not intentionally using it to prove a point, all it does is make your writing confusing and wishy-washy.

Thankfully, you don’t need to manually scour your text for passive voice. You can click the little eye icon and Yoast will highlight all the passive voice in your text: 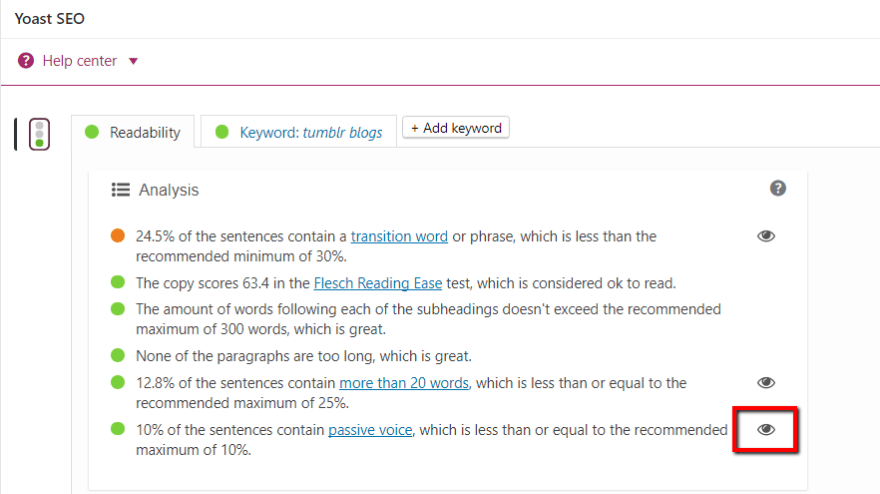 Tip #4: Use the Simplest Word Possible

If you want to increase your Flesch score and make your content broadly accessible, using so-called “dictionary words” is a bad idea. Instead, you should always try to use the simplest synonym possible.

This is definitely a divisive concept (some people call it “dumbing down”). But shorter words are just plain easier to understand.

If you want to automate this process, Hemingway Editor can also suggest simpler alternatives to complex words:

Wrapping Up – Is Yoast SEO All You Need for Readable Content?

No – Yoast handles your content, but there are other parts of readability to consider as well. Most notably – your design choices.

Let’s look at a hyperbolic example – if you make all the text on your site 10 pt Comic Sans, people are going to have a tough time reading it, right? Even if you get a perfect score on Yoast’s readability score, your design choices will hold your content back.

Combine those tips with a good Yoast readability score and you’ll go a long way towards making your site more usable and readable!

Now over to you – what do you think about Yoast’s readability score? Do you find it helpful? Or do you think its suggestions are overly restrictive sometimes?