Good news! You can now conduct easy A/B testing with a new feature in the Divi Builder called Divi Leads.

Just to make sure we’re all on the same page as to why this is so awesome:

Put simply, A/B testing gives you hard data that results in smarter design decisions. In Divi Leads, that data comes in the form of beautiful charts, percentages, and graphs–making it easier than ever to decipher what’s working and what’s not.

Virtually anything can be A/B tested with Divi Leads and in today’s article I’m going to show you how. 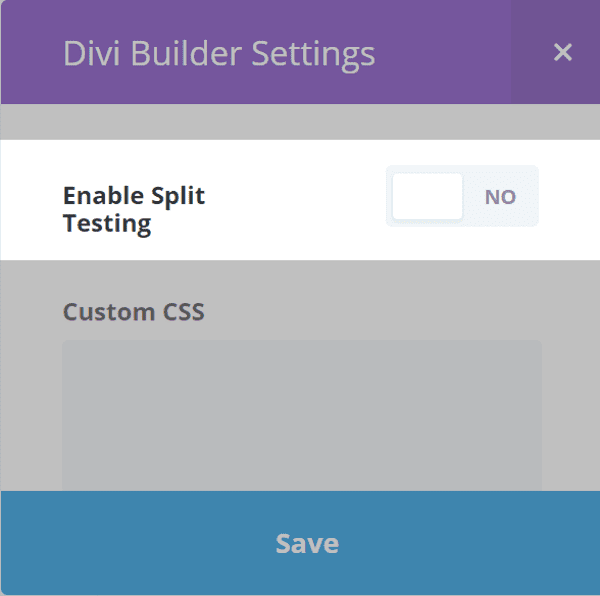 You don’t have to have your layout before enabling the split test. You can use this on layouts that you’ve already created or create a new layout as you go. When you’re ready, just open the Divi Builder Settings and click Enable Split Testing then Save. 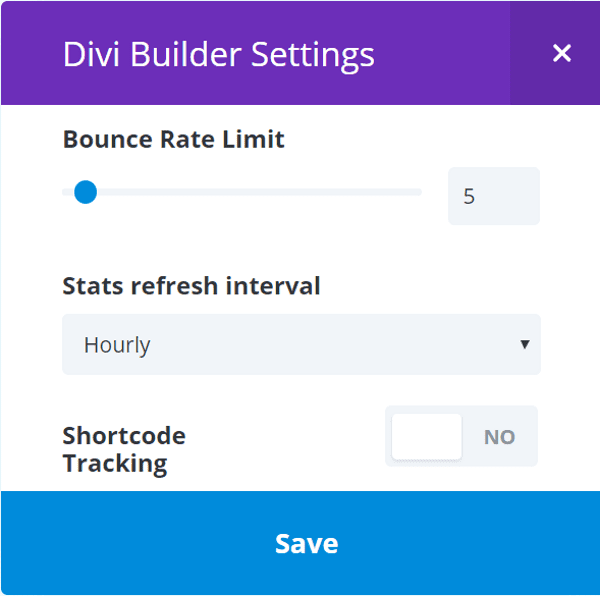 When enabled you’ll have a few new features at your disposal: You can set your bounce rate limit (which determines how many bounces you’ll allow the test to have), you can choose to reset the counter hourly or daily, and you can also use a shortcode to track end goal conversions–such as how many people who converted on a given page made it all the way through your funnel.

(If you’re still fuzzy on the tracking shortcode, don’t worry, we’ve got a follow up tutorial coming on it soon. And in the meantime you can check out the official documentation for a bit more info.) 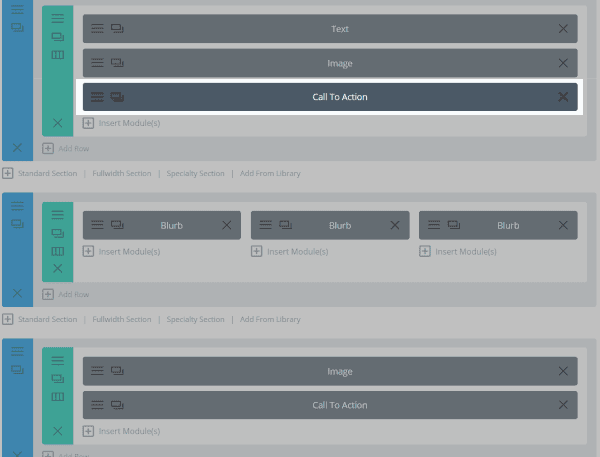 Next you’ll be prompted to choose a section, row, or module to split test. For this test, I loaded a landing page from the library and selected the top call to action module.

When I was done making my changes all I had to do to activate the split test was publish my page. If your page is already published, you’ll just need to click the update button. 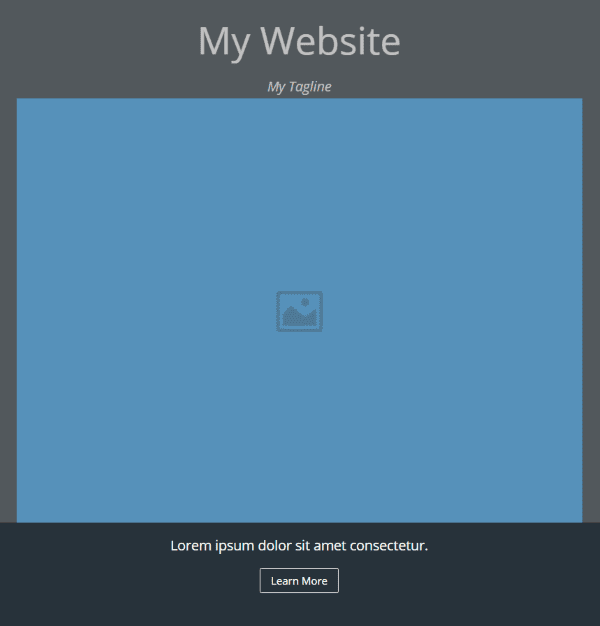 I’m left the first module with all of the default settings: Learn More for the button text, no background color, and Light for the text color. 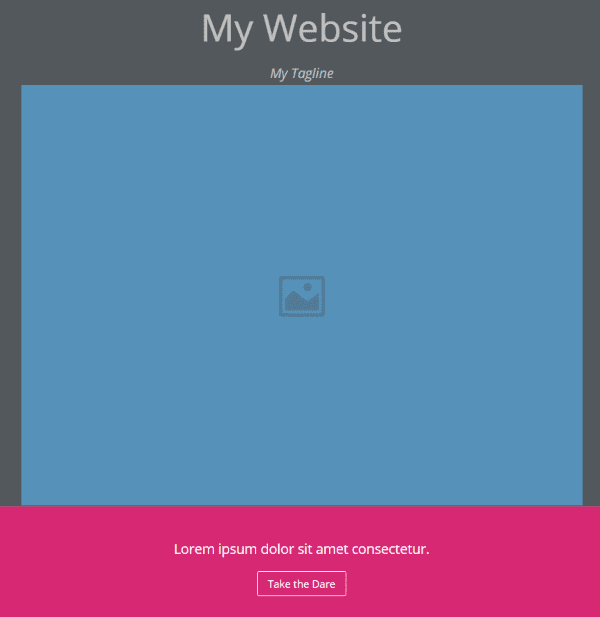 For the second module, I decided to be a little more risky and playful. I changed the text to say Take the Dare and used a magenta background color. I left the text color Light.

I published the page and I now have an A/B test setup and running. Divi is now gathering data about the test. 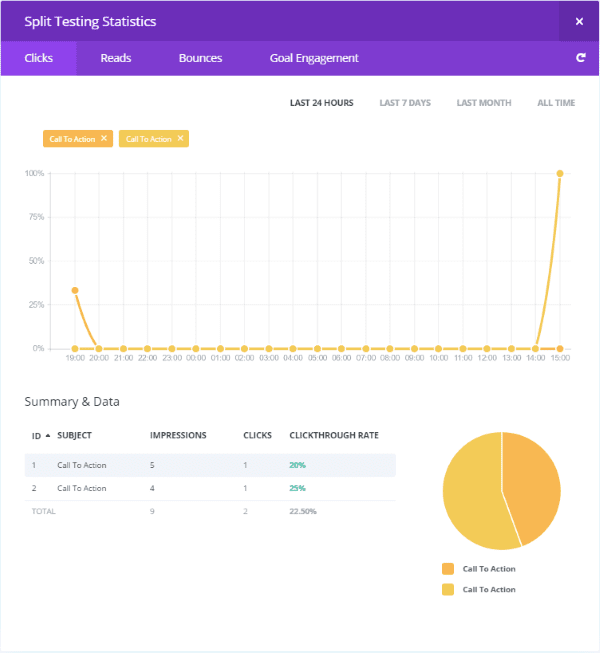 There is a stats counter button added to the top of the Divi Builder (it looks like three animated vertical bars). Clicking it will open the counter with the data that’s been collected for the A/B test and it gives you charts, graphs, and percentages to help you make decisions about your test. Hit the refresh button to update the stats.

You’ll see a chart that compares the performance of each test. It will show you the number of clicks, reads, bounces, and goal engagement. You can see just one of the calls to action or both compared. You can see the stats for the last 24 hours, last 7 days, last month, or all time. 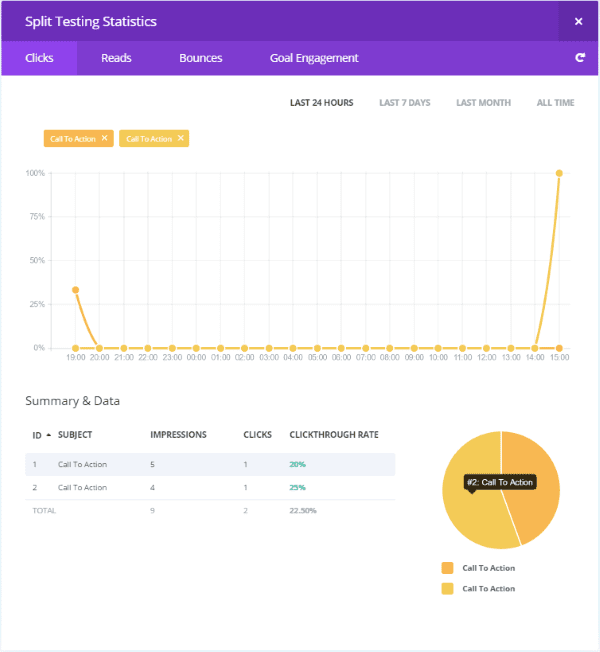 It should be noted here that this test and the data above are purely for the sake of demonstration and are not nearly adequate for actually choosing a split test winner. For that to happen we would need to run this test long enough to ensure that our results are statistically significant. So as long as we’re all clear on that, we can proceed. 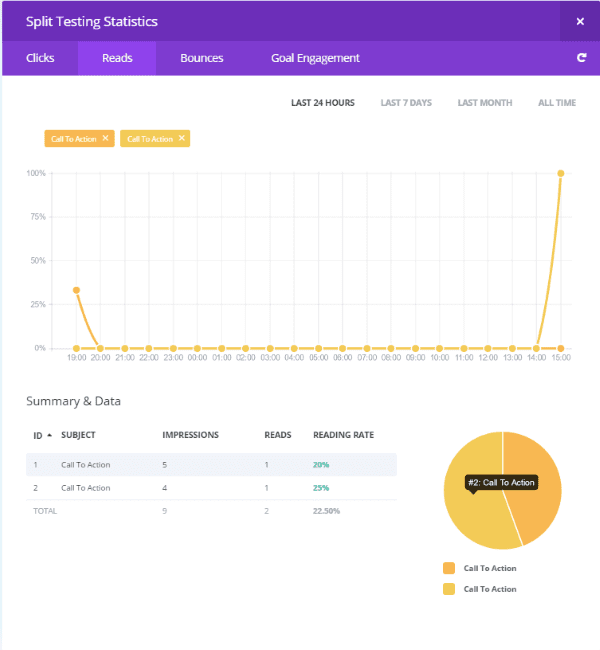 Module #2 also had more reads, which matched the statistics of Clicks. 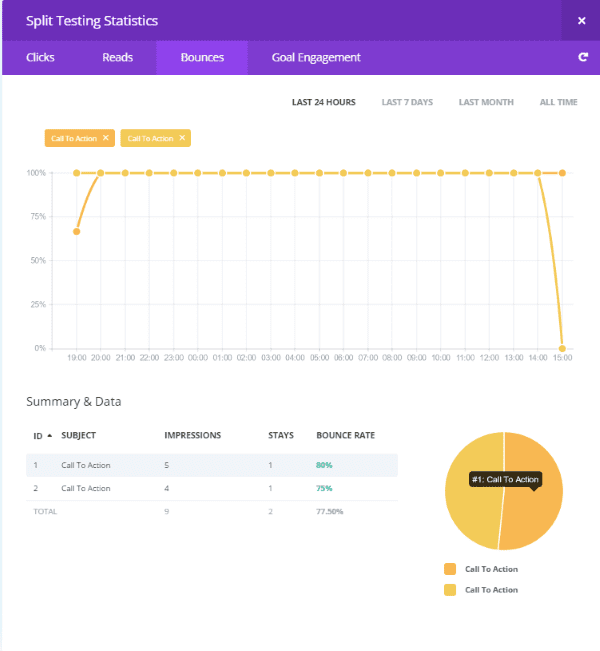 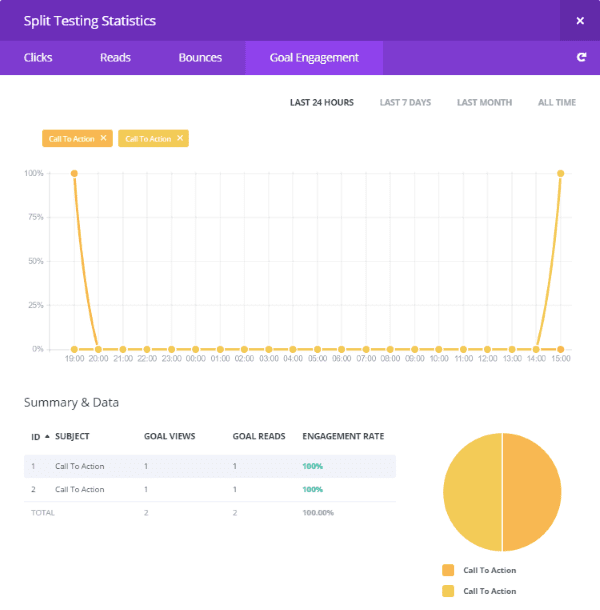 Both had 100% goal engagement, meaning both were utilized during the test.

It should be noted though that both for this test and the next, there is not nearly enough data to draw solid conclusions.

When you end the test you’ll be asked to choose one of the variations to remain active. It will delete the other variation. You can’t undo this so make sure you’ve chosen wisely. Simply click on the variation you want and your layout becomes a normal Divi layout with the choice you made.

To create a split test for rows click on the row when it asks you to choose your test object. Testing rows allows you to test multiple modules and try them in different orders or with different styles. Notice the “1” in the upper right corner. This is the first variation of the row. In the upper left corner there is an icon with two downward arrows. Selecting this will display the second variation of the row. Now I just need to choose what the tests will be and place the modules. For this one, I’m creating the layout as I go, so I selected the empty row.

Setting up a Row split test.

For the first version of the row I placed a blog, blurb, contact form, and a button. I left their colors at default. 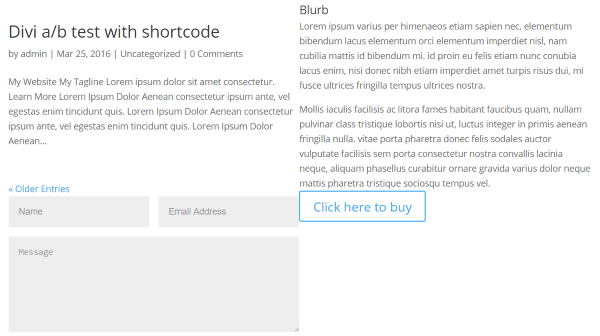 Back end view for the second version of the Row split test.

For the second version of the row I reverse the order of the blurb and blog, and then changed the colors of the contact form and button. I also changed the text of the button. 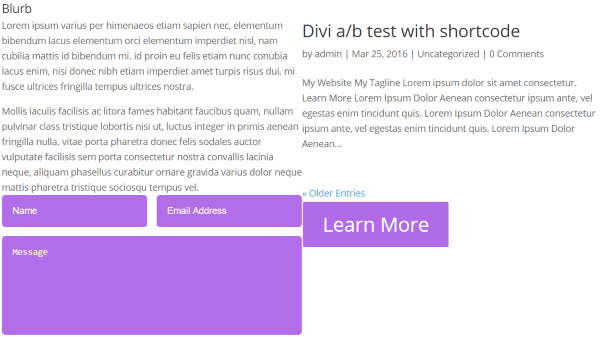 The only difference is location and colors. This is a simple test but it will show me if readers will respond to my blog link differently or if the colors catch their attention better. Once I’ve learned if they like color better I can run the test again using a different color to see if there’s any change in reader response.

I published the page and I now have an A/B test setup and running. The colors of the modules will change and you’ll see a percentage.

Creating a split test for sections is the same process as the others: you simply click on the section you want to test. The advantage in split testing sections is you can show different rows and modules, allowing you to take it further than having variations within the same rows or modules. This means some visitors can see an image, login, email form, contact form, etc., while other visitors see something completely different, such as a portfolio, video, or image gallery, for the exact same section. This could even be used to create two completely different homepages.

Setting up variation one of a section split test. 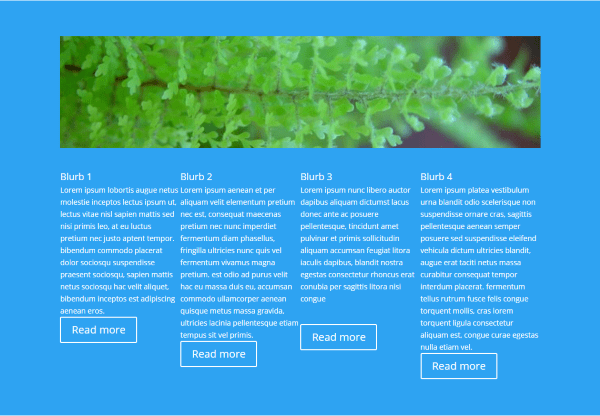 Output for the first variation of the Section split test.

Setting up variation 2 of the Section split test.

In Section 2 I’ve placed bar counters, an image, a blurb, and a button. You can see by the colors and percentage counter that my test is running. 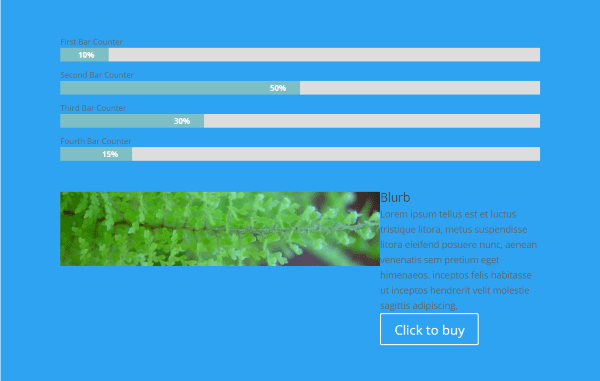 Output for variation 2 of the Section split test.

You can test more than two variations at a time by cloning the element being tested. 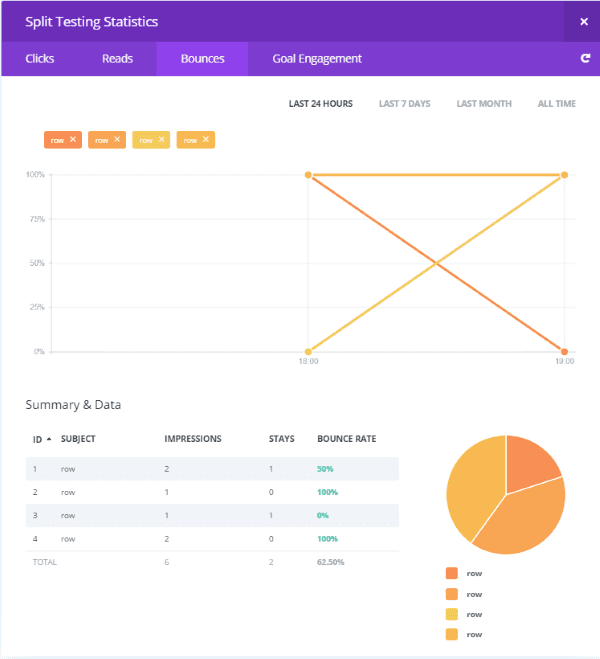 It will show the statistics for every element currently being tested. In the above example the stats show all four sections.

Here are a few ideas of how to use A/B testing in general and in Divi, specifically:

A/B testing is one of the best ways to improve the content of your website. Divi’s easy A/B testing through Divi Leads removes the guesswork and gives you the information you need to create calls to action that works, reduce bounce rates, increase sales, and improve conversion rates. It gives you quantifiable data so you know how your visitors will respond.

Utilizing A/B testing will give you an advantage over those that don’t use it. It can be considered your secret weapon for website improvement.

We would like to hear from you. Do you plan to use A/B testing in Divi? What are the types of things you plan to test using Divi Leads? Let us know in the comments below.