WordPress 4.9 released with a much needed (and much longed-for) feature: drafting, scheduling, and previewing theme changes. For a while now (since WP 3.4), the customize option in our admin dashboards has given us a modicum of control over our sites, but 4.9 really skyrocketed the feature into one of Core’s best. If you haven’t played around with the WordPress 4.9 customizer updates, here’s a rundown of what to expect.

Keep in mind that unlike the upcoming WordPress 5.0 with its launch of Gutenberg as the primary editor, WP 4.9 might seem a little lacking. But the real strength of WordPress is not in its flashiness–it’s in the utility it provides users.

And 4.9 is all about utility and quality of life. So let’s dig in and celebrate the small stuff.

When you first head to Appearance -> Customize, things look pretty normal. In all honesty, they are. You won’t see anything different at all than it was prior to 4.9, really. The Core contributors have made sure that over the past few updates the experience with the customizer has become slick and smooth, and they wouldn’t want to break that here. 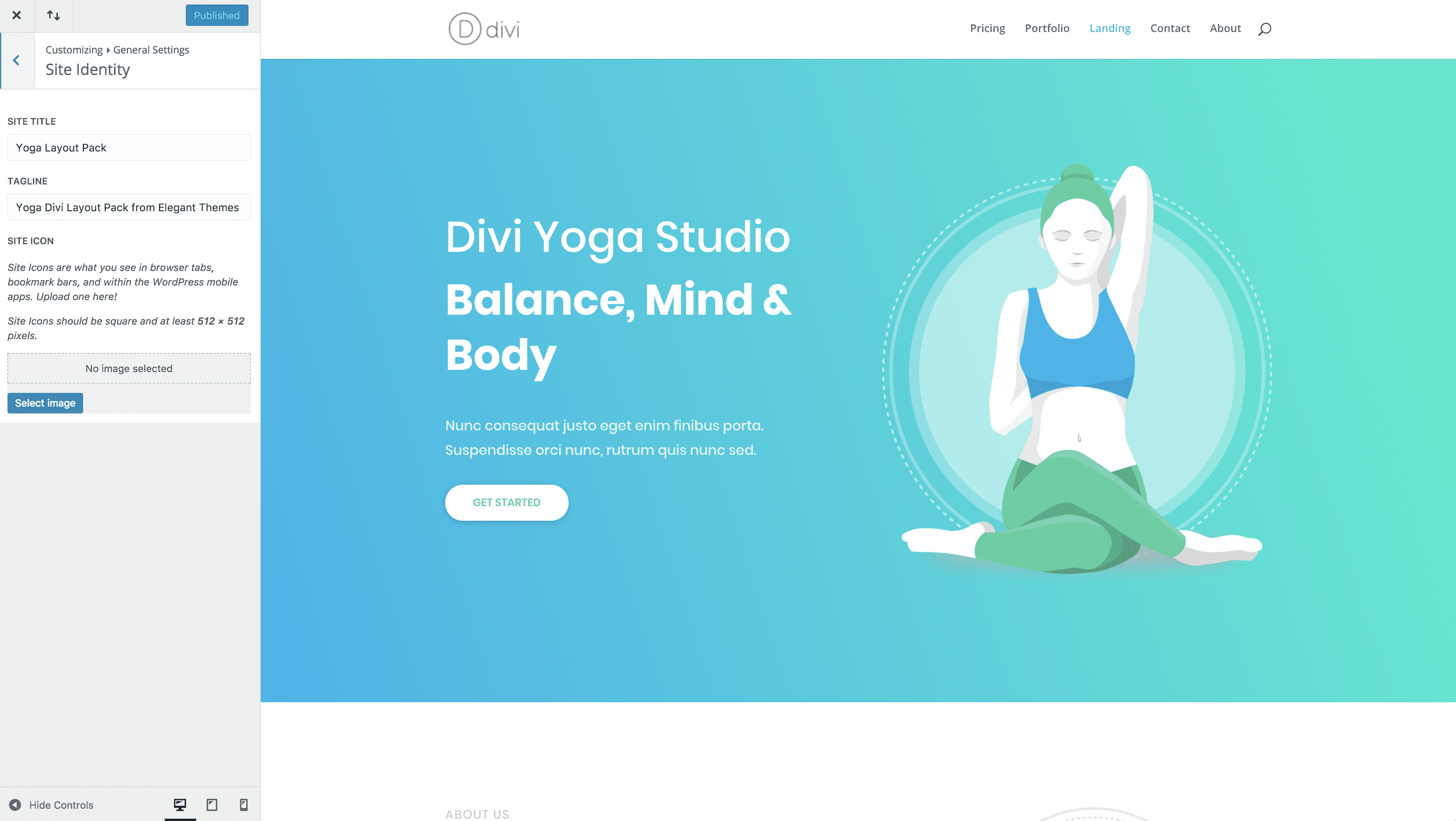 With the first change, however, you’ll see a small alteration from the normal Publish button that you’re used to. A gear icon will appear when you make even the smallest change. As you can see, I just added the text for Divi to the site title, and the new gear button appeared. 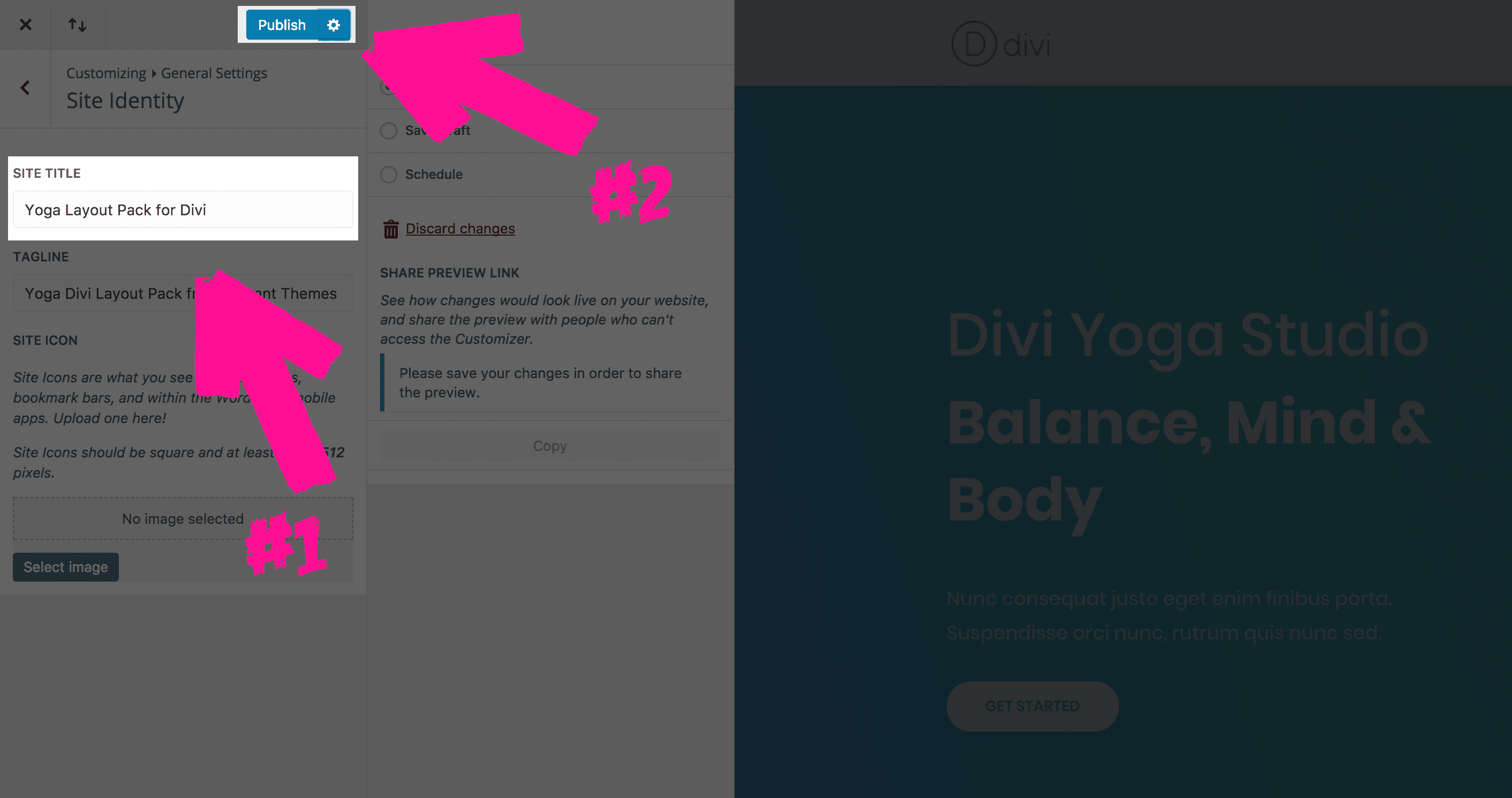 And when you open up the gear menu, the real content that came with this update shows up. It may not look like much at first, but it’s a super powerful menu, even though it’s only a handful of options. 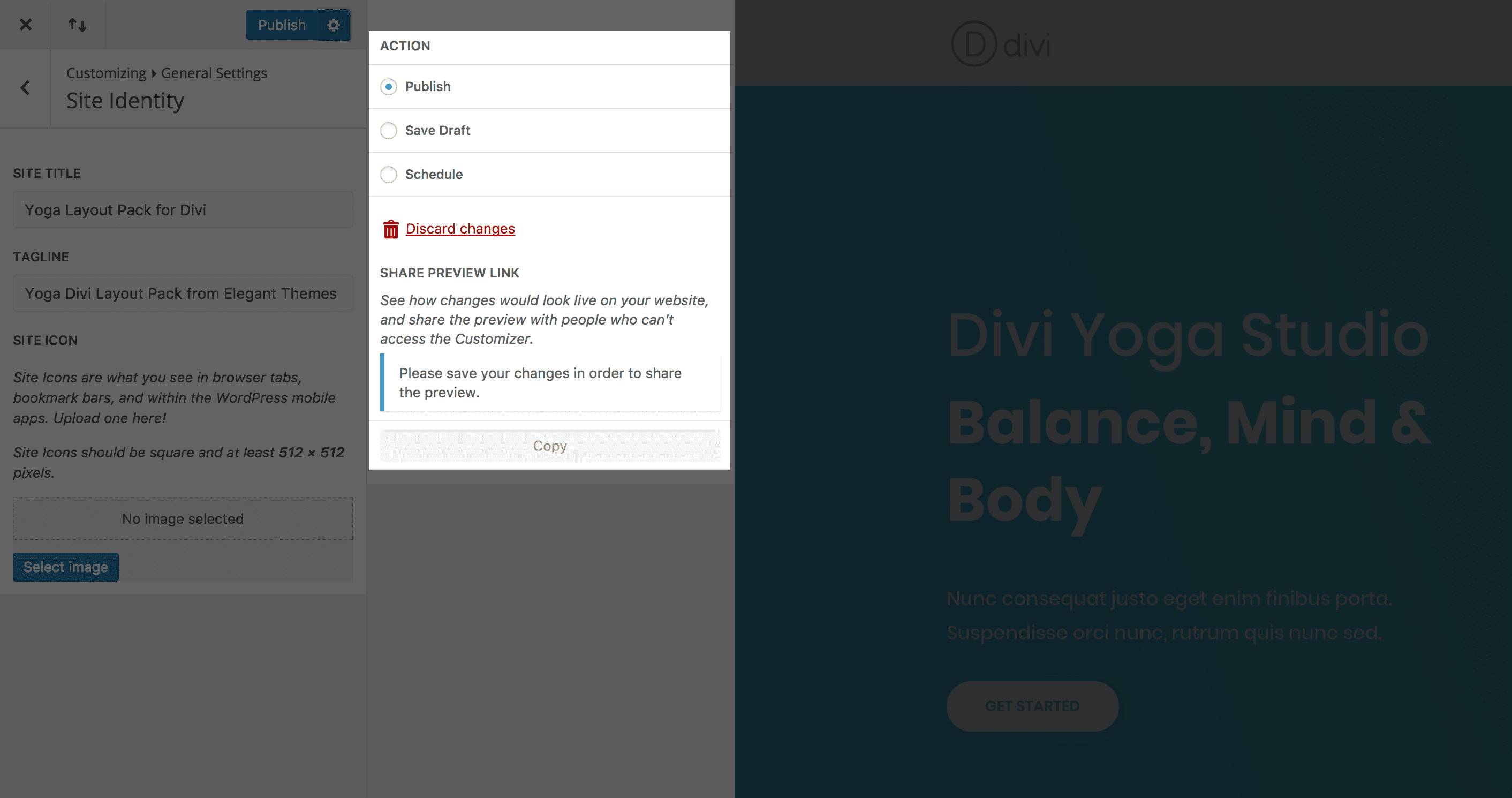 Three is the Magic Number

You get three new publishing options with the WordPress 4.9 customizer updates. And under that, you get the Share Preview Link section–which is awesome all by its lonesome–which we will discuss in-depth below.

The first option…well, I think it’s pretty self-explanatory. Leave the Publish radial active (or select it after you have saved a draft), and any changes that you make will go live on the site immediately. This is the same functionality the theme customizer has always had. Nothing new here, and nothing to see here.

The cool stuff is with drafting and scheduling.

When you use Save Draft the button up top changes, and you can leave the customizer at any point and come back. Until you select Publish again, nothing you do will actually hit the live site. You will be able to go in and out of the customizer as much as you want, as long as you keep your changes saved as a draft.

More than anything else, drafting is the most-needed change in the update because you can now avoid having multiple windows/tabs open at the same time. I used to have to keep one customizer tab open, while another was open to mess around in the rest of the admin dashboard.

No more! I can finally save a draft. If you use the customizer in your daily routine, your workflow just got better.

The schedule function works pretty much the same way. The main difference being that you set a date and time in the future for the changes to go live. You are still drafting, yes, but you are giving yourself some time to make edits, proof the copy, and make final changes. You may have a lot of reasons to do this, and it’s a really important part of the update.

By including this scheduling and drafting functionality in the WordPress Core, the developers have essentially given users a premium feature of many established hosting companies: staging sites. No longer will users have to pay to show off their work before it’s live on the interweb!

Between saving drafts and scheduling, designers and developers can work together to make sure that every change they want and need is exactly right before it goes live. And even better, a major function for staging sites comes in the ability to share a live site link with anyone who may need to checkout changes.

You Can Do That, Too!

Yep! You sure can! 4.9 lets you copy a link that you can send to anyone to check out what you’ve done before it goes live. 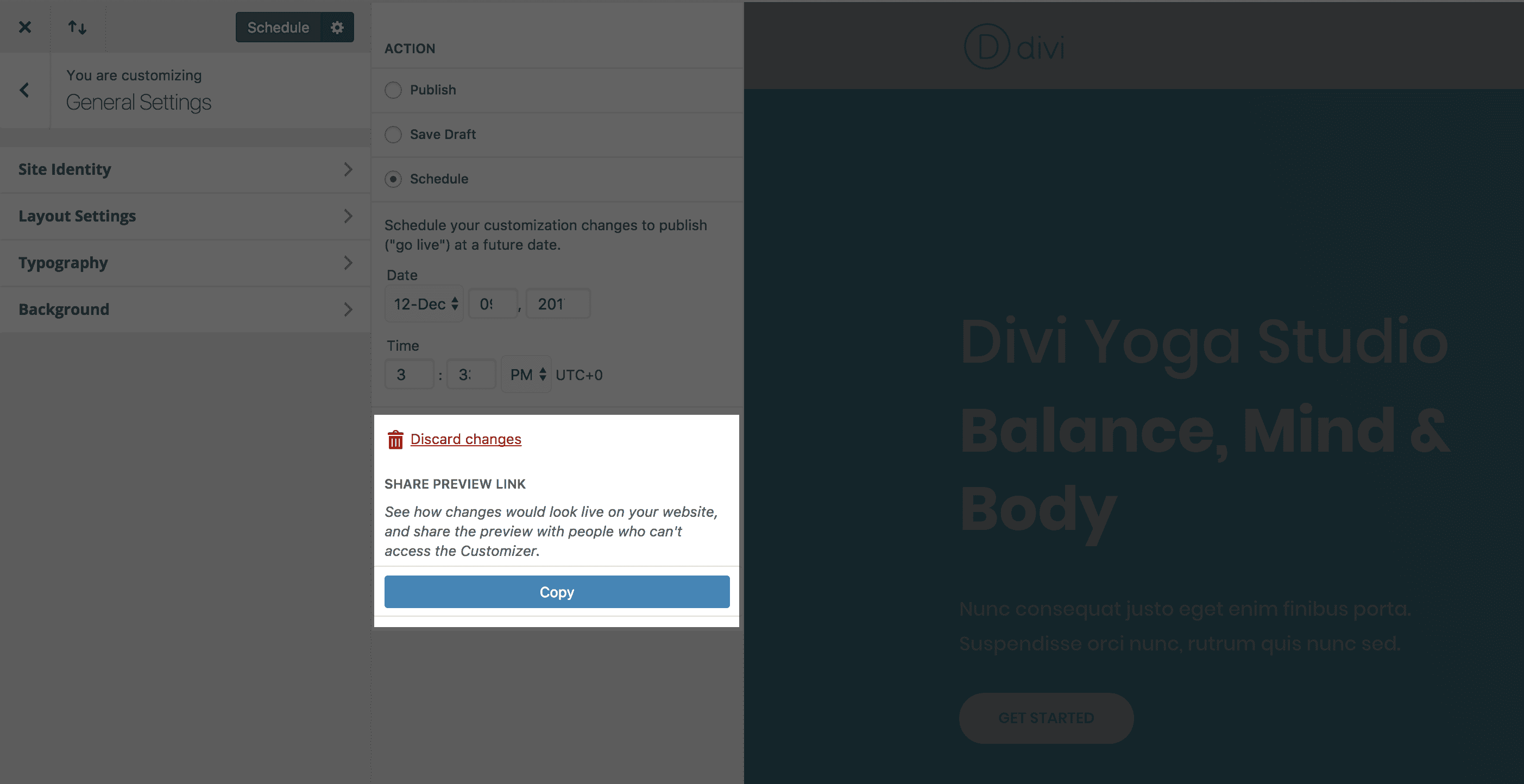 Your editor can proofread your copy so you can discuss changes, your designers can make sure you’ve transferred their PDF glory into pixel-perfect CSS, or you can just show off your work to your adoring fans in a tutorial without altering your money-maker. Whatever you need the preview link for, you got it. All without any of the extra muss and fuss that usually comes with making preview links.

It’s amazing that live site draft previews have been incorporated into Core, really. They are normally a pretty limited feature that only comes when you specifically work toward them. You either need to have a dev site set up with limited access for people, a local server (such as MAMP or Flywheel’s Local), or use a host that provides staging areas.

By putting this particular ability in all WP users’ hands, it opens up a lot of options for even better (and more efficient) development and design to happen.

What do you mean “is that all?” Isn’t that enough? The answer is a resounding yes. Absolutely, it is.

Like I said before, this is not the most controversial, flashy, or even publicized feature WordPress has ever included. But it really is one of the most useful. Part of the design strategies driving WP these days is making sure that features that might have been missing from Core that provide basic quality-of-life functionalty get implemented.

With the WordPress 4.9 customizer updates, you can see that the strategy is playing out very nicely.

Have you been able to try out the new 4.9 additions yet? What do you think, and have they made your life just a little better?