WordPress caching plugins are kind of the new hotness. With Google ranking sites based on load speed, the market is ripe for competitors to put their best feet forward and take a shot at the top spot in the WordPress caching plugin world. Well, Comet Cache is a free plugin from WebSharks, Inc. and they market it on the fact that it’s not just easy to use, but it’s simple, too. WordPress caching can be mind-bogglingly complex, but Comet Cache tries to make it much less so. But do they succeed? Let’s take a look.

For the purposes of this article, I am going to be working with Comet Cache Lite, the free version of the plugin that you can all download from the WordPress plugin repository. Search in your WP dashboard or download it directly. Don’t be put off by the word Lite here. While the Pro version is very powerful, the free download is more than enough for many websites. And if you’re using Comet Cache because of its commitment to simplicity, you should be just fine. The lite version is incredibly new user-friendly.

Comet Cache takes a cue from WordPress itself and boasts a “famous two-minute setup” like the “famous five-minute installation.” Now, the WP 5-minute install generally doesn’t work out like that. I’ve never used the official steps and it take anywhere under 15 minutes. Maybe it’s just me.

So does Comet Cache keep their end of the bargain? When I timed it from clicking the download button in the image above, it took about 75 seconds for me to get to the Options Updated Successfully confirmation. So yeah, it’s downright simple to install and get up and running.

If you’re a typical WP user, that’s all you’ll need to do. The same would be true of WP Rocket, W3 Total Cache, WP Super Cache, or any others. They all tend to have a set-it-and-forget-it button. Comet Cache is no different.

Just because you can set it and forget it doesn’t mean that you have to. Comet Cache is full of advanced options for you, too, if you want to dig deeper into them.

The general rule of thumb is that if you don’t understand the heading, don’t mess with the setting. But if you feel the need, you can tweak to your heart’s content. 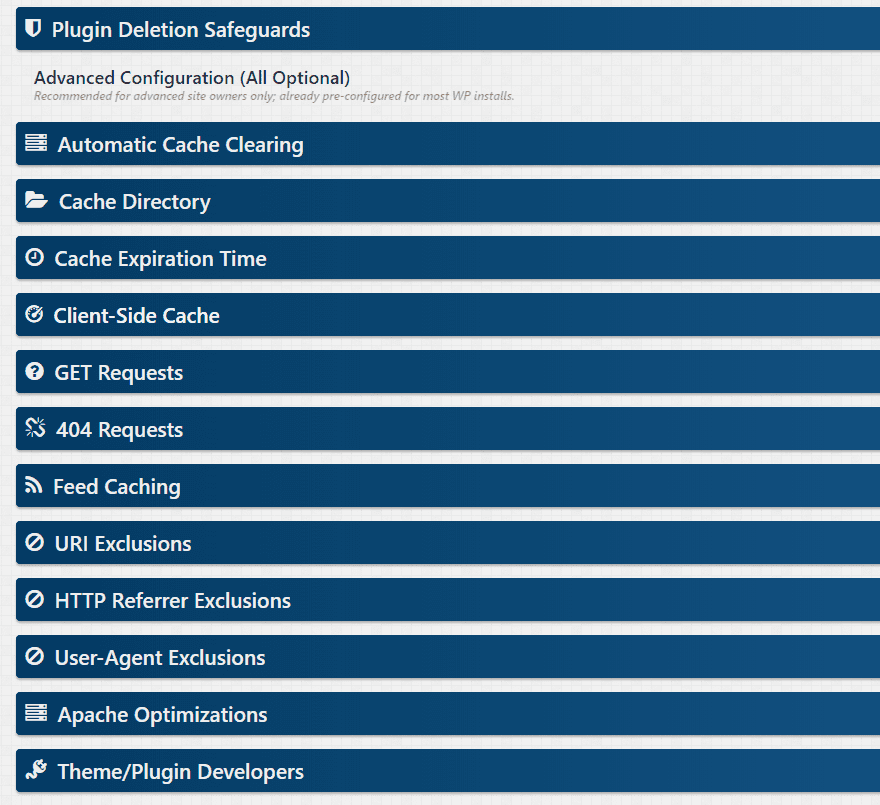 I would also like to commend the devs on simplicity in their UI and descriptions here, too. If nothing else, this is the only caching plugin that makes me not afraid to tweak. A lot of them have a settings tab that looks like a mix of an old-timey telephone switchboard and a Reddit-winning wall of text. The way WebSharks has broken down the options deserves recognition because they’re approachable for the first time for many users. By keeping them all in one screen with toggle dropdowns, it helps users really understand what they’re doing to their sites.

That said, you still won’t mess with some of them because of their specialized nature (I’m looking at you Apache Optimizations), but I’ll go through what you’re most likely poke around with.

Enabled by default, Comet Cache will clear and re-cache whatever you’ve set as the Front Page in your WP settings. The Auto-Clear Designated “Home Page” option is great for blogs and sites that keep dynamic content on their front pages, but if you use a landing or funnel page to direct your users elsewhere, there’s no reason for you to waste the server cycles on this. However, there is a related Auto-Clear Designated “Posts Page,” which you can leave enabled if you do have a blog. That way visitors will actually see new posts as they’re made instead of waiting until the cache clears later.

Additionally, depending on your taxonomies and hierarchies, you can adjust which archives pages update and when. If you never want Tag archives, let’s say, to go through the process, you can turn it off. It saves a lot of space and processing power to tweak these for your own personal set up.

Caching is a wonderful thing. It speeds up your site by delivering a stored version of the website instead of loading it anew each time. However, you update your website. Maybe you blog once a week, or you add a new menu to your restaurant site. If the browser delivers last week’s menu or doesn’t display your time-sensitive contest announcement post, you lose business. So you need to make sure that Comet Cache is set to expire and reset at a regular interval. It can be as short as 30 seconds or as long as…well, as long as you want (6 months, a year?). It’s up to you. And even if you update the cache every week or month, the old cache files are still hanging around–the cleanup schedule says that if there are any expired files, they get purged.

Finding the right balance for you can be tricky, but it’s easy enough to experiment with this one. If you’re worried about messing with what visitors see, though, don’t touch it.

Continuing the example of the restaurant menu above, maybe you’re worried about the cache clearing and your menu update not being really friendly with each other. That’s a valid fear. You can use the URI Exclusions to keep any individual pages from ever being cached. So if you were to enter /daily-menu (or whatever your slug happens to be) in the text area, that whole page will never be cached, and your menu will be loaded anew each and every time the page is requested.

Additionally, you can set caching exclusions easily for various referring sites (anyone who clicks through from Facebook, for instance, never gets a cached page) or certain browsers (mobile Chrome, maybe). Reasons for this don’t come up often, but when they do, it’s nice to be able to find and understand how to set them up quickly.

Comet Cache is the simplest and easiest caching plugin I’ve used to do this particular feature. It’s also explained really well in their intro text, and they link to their knowledge base article about it. In general, these features are obscure and not really highlighted. Comet Cache should be commended for putting it (and other options) right out there without having to go dig around for them. Even if they’re just tucked away in another tab, advanced options can be intimidating, and even when dealing with URI Exclusions and User-Agent/HTTP Exclusions, they’re accessible and understandable.

Even if you don’t ever need to use them.

Comet Cache is fighting a hard battle. There are a ton of other caching plugins that are more commonly named among WP users, and CC is a relatively small plugin (60k installs vs millions). However, there’s a reason that underdog movies are so successful. The little guy tries hard and pushes through. And that’s what Comet Cache does. In my review trials, the caching was every bit as fast as W3 Total Cache and WP Super Cache. Plus, Comet Cache generally came out a little faster on my image-heavy site than my more text-heavy one, which W3 Total won most often.

If you haven’t installed a caching plugin before, you absolutely should. Google is essentially forcing us all to do it with their page-speed ranking and mobile-first initiatives. And if you’re totally new to caching plugins and want to learn, Comet Cache may be what you’re looking for. It’s by far the most newbie-friendly cache plugin I’ve ever used personally, and the experience is pretty much what it’s sold as: simple.

If that’s your thing, what have you got to lose? Well, outside of a few milliseconds.

What’s your experience with different caching plugins? Let us know in the comments!