DermBids is a service that helps people compare tattoo removal quotes from local providers, just by uploading a picture of their tattoo.

I started kicking around the idea of DermBids in 2012 after some of my own family members had tattoos that they no longer wanted anymore. When I asked them, “Why don’t you get it removed?” they replied with, “I don’t want to deal with the hassles of consultation visits to find the best place.”

I believed there had to be a better way to shop around.

So, I started asking my friends if they had tattoo regret. To my surprise at the time, most of the people I talked with did have tattoo regret! I thought there could potentially be a business idea here so I did a lot of research and asked more friends about their regret.

I wanted to ask people questions to understand their tattoo regret, find out their interest in tattoo removal, and learn what might prevent them from following through with removal. I researched the right questions to ask to validate my assumptions. I hustled Twitter to find people that were complaining about their tattoos as well as random people on the street (literately) and asked them to fill out a survey I made. To my surprise they did!

After I started to get a few survey completions from Twitter, I used a service and paid people for completing the survey to expedite the process. As it turns out, there is a need for a service like DermBids!

The next step was for me to see if people would actually upload a picture of their tattoo to a website. I put a very simple landing page together with Unbounce that contained a form. I started directing people complaining on Twitter to the landing page and again to my surprise, people started uploading pictures!

During this time I was selected to participate in the Startup Leadership Program (SLP) which is a highly selective, 80-hour, 6-month world-class training program and lifetime network for outstanding founders and innovators. SLP Fellows have founded 1,000 companies that have raised $400 million. This program helped me understand product development, business validation and customer development. If there is a chapter near you, consider joining.

Now it was time to actually build a website. One of my friends had recently sold his blog and it was built on WordPress with a theme framework (not Elegant Themes). He recommended I give it a try. I had not heard of WordPress nor this other theme framework. I had tinkered around with HTML many years ago. CSS was not around at the time. I was in for a rude awakening.

I bit the bullet and bought a non-Elegant Themes framework. I installed WordPress, the theme framework and immediately became disgruntled. No joke, I asked this other theme framework for a refund within 24 hours. 23 of those hours were spent researching a new theme framework.

Selecting the next theme framework came down to 3 very important things:

I came across Elegant Themes and it was a perfect match!

I decided to go with the Lucid theme and use their builder plugin to help assist me with the website.

In preparation for building the website I wanted to re-learn HTML and learn CSS. I took a couple free online tutorials at Codecademy so I could be at least somewhat knowledgeable. I suggest everyone take this class so they can make adjustments to the design on their own.

I launched the website with the Lucid theme in January of 2013. While building the website I received great support from Elegant Themes on modifying CSS/PHP to get the design I needed. Although the theme, builder, and my own CSS edits got me to about 70% of what I wanted the site to look like, the Elegant Theme support really was the unsung hero in helping me get the website/business launched.

Throughout 2013 I continued to add pages and blog posts to the website. I learned and applied SEO, content writing, and conversion optimization rather quickly in the process. I wanted to take the DermBids website to the next level and make it a traffic and conversion machine.

I looked for a mentor in the Chicago area to guide me and suggest recommendations to the DermBids website. Andy at Orbit Media Studios writes a fantastic blog, so I reached out to him to schedule office hours. He was gracious to meet with me and provide mentorship.

After the first meeting with Andy, he suggested I design the website around the emotions surrounding tattoo removal. I agreed with him and decided to undertake a website redesign from Lucid to Divi. 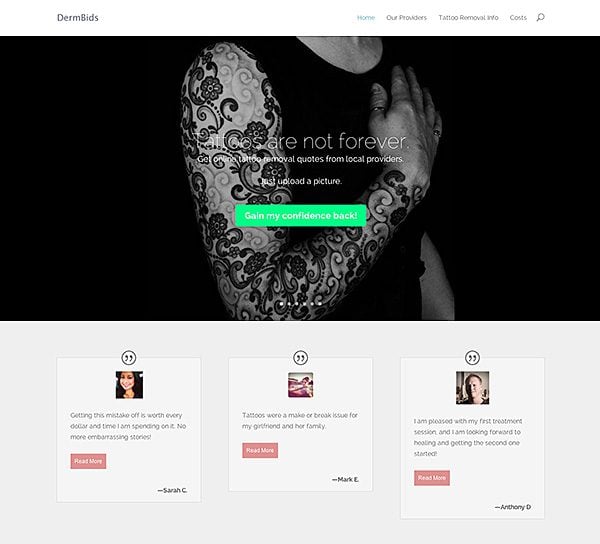 Divi was available for download in December and I was super excited. Christmas morning excited. I downloaded the theme the day it was released. I knew Divi was the theme that would make DermBids the conversion machine I wanted it to be. It gave me the tools to build the website with an emotional feel and it was mobile responsive. This was key being majority of the website traffic and conversion was from mobile.

I spent 2-3 weeks redesigning the website. I overhauled everything. Implementing a site redesign and transitioning themes comes with many challenges. Thankfully, the Elegant Themes support staff made this transition as smooth as possible.

Was Divi Worth It?

Immediately after the launch I wanted to gauge success of Divi. Was moving from Lucid to Divi the right choice for me? How would Google respond to the site redesign? Would my conversion rate go up? 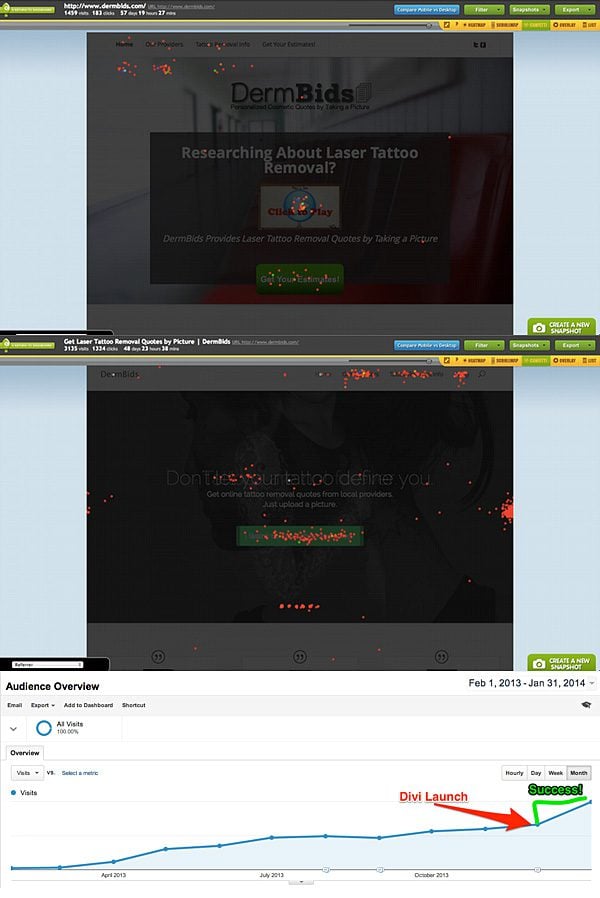 I use Crazy Egg to observe website traffic engagements. Take a look at the comparisons between Lucid and Divi. Average page views, clicks and time spent on each page are all up. Conversion rates increased by 35%, too.

Making the choice to use Divi was by far one of the best business decisions I made. I’m looking forward to new features of Divi and working with their awesome support staff.

Eric is the founder of Dermbids, a website dedicated to tattoo removal. He is an avid WordPress and Elegant Themes user, and he recently re-designed his entire website using <a href="http://www.elegantthemes.com/gallery/divi/">Divi</a>.