Lindsay Pietroluongo 4 Comments Reader Disclosure Disclosure: If you purchase something after clicking links in the post, we may receive a commission. Thank you for the support! 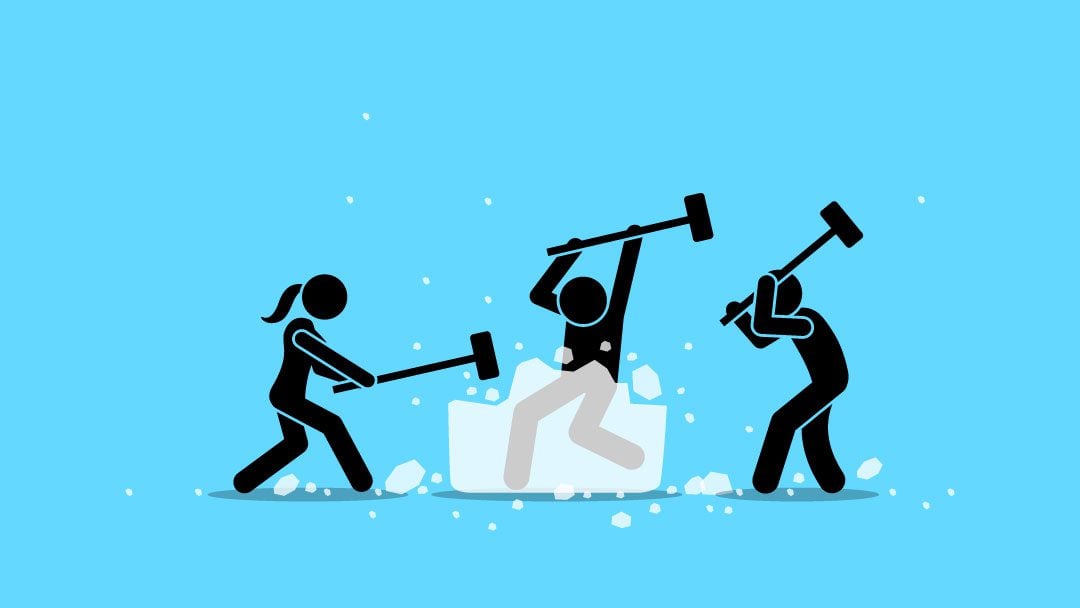 No matter how much they love their job, work culture and coworkers, employees don’t want to be subjected to embarrassing or lame icebreaker games or team building exercises. Even thinking that a game of charades could be waiting is enough to make some people call in sick if they know a meeting is on that day’s schedule. Icebreakers don’t have to be panic-inducing, though. They don’t have to be boring or evoke eye-rolls, either.

What’s the Point of Icebreaker Games and Team Building Exercises?

Team building shouldn’t mean shining a spotlight on people who are uncomfortable being the center of attention. Instead, your goal is to strengthen bonds between coworkers, get people comfortable around one another, stimulate brainstorming and show everyone that they’re an appreciated part of the team.

Icebreaker games can be played at the start of a meeting to get everyone warmed up or at the end of an intense or long meeting to lighten the mood. You can also play icebreakers at company retreats, especially if different departments come together or you’re gathering remote workers who rarely get the chance to interact in person.

Here are 12 icebreaker games and team building exercises your employees won’t hate – they may even crack a smile or laugh a bit. These exercises range from getting-to-know-you exercises to lighthearted, nothing-but-fun games. Some require advanced preparation, while others can be done with practically nothing.

The Extremes Game asks employees to choose between two things – two foods, two sports, two vacation spots, etc. – and line up accordingly. Icebreaker games like this mean you can learn a lot about the people you work with in just 15 minutes, and coworkers will discover similarities they didn’t know they had.

For people with no preference, they can stand in the middle. Also, feel free to make the questions a bit deeper, so long as you don’t venture into “this is going to turn into a fight” territory. For example, asking people who they voted for in the last election may not be the best idea.

The Marshmallow Challenge emerged as a team building exercise in this TED talk. Here’s how to do it:

Employees will have to brainstorm and work together to come up with the sturdiest and tallest structure, and they’ll have to course-correct if their first attempt fails. Plus, by observing the teams, you’ll get an idea for who’s ultra-competitive, who works well with others, who has trouble coming out of their shell, etc.

Icebreaker games that are best for creative or sales teams involve coming up with ideas and presenting them to a group. Movie Pitch is exactly that type of game.

Scavenger hunts take a lot of time to plan and organize, but they can be a ton of fun. Plus, you can hold a scavenger hunt wherever you want, whether that’s in your office building or across an entire city. The types of clues and challenges you choose will depend on the purpose of the scavenger hunt. Here are the basic steps:

Icebreaker games are extra fun when they come with free gifts. Break the ice and treat your employees to swag with a Swag Swap. Here’s how to arrange and run it:

Bonus: You can see which swag items people like the most based on their reactions and steals, and you can then order more of them to maximize your swag-related marketing efforts.

6. This is Better Than That

This icebreaker exercise is well-suited for marketing and sales teams that are used to coming up with pitches, but it can also work for any of your employees. Here’s how to play:

Two Truths and a Lie is an easy get-to-know-you game to play with any amount of people. It encourages people to share interesting facts with one another, uncovers similarities people may have and opens up spirited conversations. Each person takes a turn to say two truths and a lie, and everyone else has to guess which one is the lie. For example:

(The last one is the lie, if you’re curious.)

Make sure you give your employees time to prepare. It’s nerve-wracking to think up everything in under a minute, so tell them a day or an hour before the session so they can brainstorm. Icebreaker games shouldn’t put people on the spot and make them nervous from the get-go.

This one is similar to Two Truths and a Lie because everyone has to come up with an interesting or unexpected fact about themselves.

Again, give them time to brainstorm so they can come up with unique tidbits.

Play the Who’s My Match? game at a casual work get-together, like an off-site retreat or an after-hours gathering. The goal is to have people find their fictional match by talking to others.

Would You Rather? is a classic game that’s played by all age groups, and – with the right, suitable-for-work questions – it can be a fun icebreaker with your team. Plus, some questions can open up deeper conversations. Ask questions like:

Instead of making people come up with Would You Rather? questions, write several out ahead of time. One person can read the questions and then each person can answer. Or, if you’re with a big group, have people raise their hands based on their choice.

Also, make sure you know your audience when deciding which questions to include. If you’re on the fence about whether a question could be misconstrued or considered insensitive, skip it. You can find a big list of Would You Rather? questions here.

Zip Zap Zop is super easy and puts very little pressure on participants. It can get silly, though, which loosens everyone up. The rules couldn’t be easier, and no preparation is required, other than explaining how the game is played. For this one, you’ll want a group of 10 or more people.

You can decide what it means when a person loses. For example, that person can leave the game, and then the next round can continue with the remaining players, and you can do that until you get down to two players. As more people leave the game, you can direct them toward another icebreaker. Alternatively, when one person gets three strikes, you can start a new round with everyone still participating and choose a new set of words for the sequence.

QuizBreaker is a fun, get-to-know-you game for remote teams. After signing up, each team member will answer lighthearted questions like, “Who’s your favorite character from a movie or book?” Then, everyone on the team sees the answers to the questions and tries to pair the answers with team members.

It’s reasonable to expect employees to break out of their shells during icebreaker games or team building exercises, but they shouldn’t have to perform or do something that makes them feel uncomfortable or ill-equipped. Some icebreakers ask that people remove a shoe, act out each letter of their name or draw a self-portrait – those are quick ways alienate the employees who are on the reserved side, which is the opposite of what you want to do during an icebreaker.

Icebreakers can help new employees meet their coworkers and experience the workplace culture, and team building exercises can strengthen bonds between familiar coworkers while giving them a break from the grind. As you learn more about your employees and are able to gauge their comfort levels, you can try out other get-to-know-you games that ask for a bit more, like on-the-spot drawing, acting or storytelling.

You may also want to check out our article with Conversation Starters and Ice Breakers for Business Meetings, Conferences and More.

Imagine waking up in the morning, getting ready for work, and arriving at the office, only to find that … there’s no seat for you. Or, maybe you get to work and — surprise! — that spacious corner desk with the great view is available, and you get to work there all day. With hot desking,...