Ever since the word “viral” (in relation to content) entered the general lexicon of the internet, achieving it has been the ultimate goal of every person publishing content online. As coveted as this goal has become however, actually “going viral” in any kind of consistent way has eluded most, even skilled marketers. As a result, its pursuit has been a source of frustration, squandered resources, and poorly conceived (and executed) content marketing strategies.

I remember sitting in strategy meetings in 2006 and 2007, when YouTube was really picking up steam. Videos on that platform were racking up an insane amount of views (for the time) and figuring out the winning formula that sent these videos viral was the ultimate puzzle to be solved.

At the time, I was a writer and producer at a new media production company. Most of what we did was produce media for private distribution–such as fundraising dvd’s for non-profits or short videos for live events–but with the rise of internet video we felt that we were perfectly positioned to capitalize on it and grow our studio into something more: A self-sustaining production company (no clients) that created its own original content for a massive online audience. An audience who would, of course, pay the bills with advertising dollars. And, to be fair, that’s a dream that many popular YouTubers have actually achieved. But our approach was all backwards, even if our reasoning seemed to make a lot of sense to us at the time.

The biggest reason we all felt our success was imminent was because we had much better gear and technical skills than the people racking up massive view counts on YouTube. In our minds, all we had to do was upload something with high production quality (and in doing so wow the general public with our technical and creative prowess) and the magic of the internet would simply take over, propelling our videos to new viral heights.

We were wrong, of course, just like so many others. As production professionals we were caught up in understanding the technology, mastering our craft, and presenting the world with something of quality. Which is why it was maddening to put out high quality video after video, only to see that the most watched and shared content that week would be a shaky, grainy, two minute montage of guys getting hit in the balls. Or boobs. Boobs are always popular.

image via blambca and shutterstock.com

This, and much more, is precisely what author Jonah Sachs reveals and then discusses in detail in his book Winning the Story Wars, where I am drawing my three keys to creating viral content from. In the section below, I will walk you through them, paraphrasing the definitions (since his explanation takes the form of a long analogy we don’t have the space for in this post) and providing examples for each in turn.

It should be noted that crafting viral content is not the primary aim of Winning the Story Wars. Instead, Sachs attempted to discover and then map the reasons why human beings respond so strongly to some content and not to others; recognizing that sharing a piece of content was actually a symptom of a deeper reaction they already had during their experience of it.

What he discovered was that he, like all of us, are a bit late to the party. It turns out that over fifty years ago scholar and professor Joseph Campbell had already made some serious headway on this problem through his academic specialty, comparative mythology. Particularly in his book The Hero with a Thousand Faces which, among other things, outlines the now famous Hero’s Journey. A story pattern that has proven throughout thousands of years to consistently resonate with audiences across cultures. 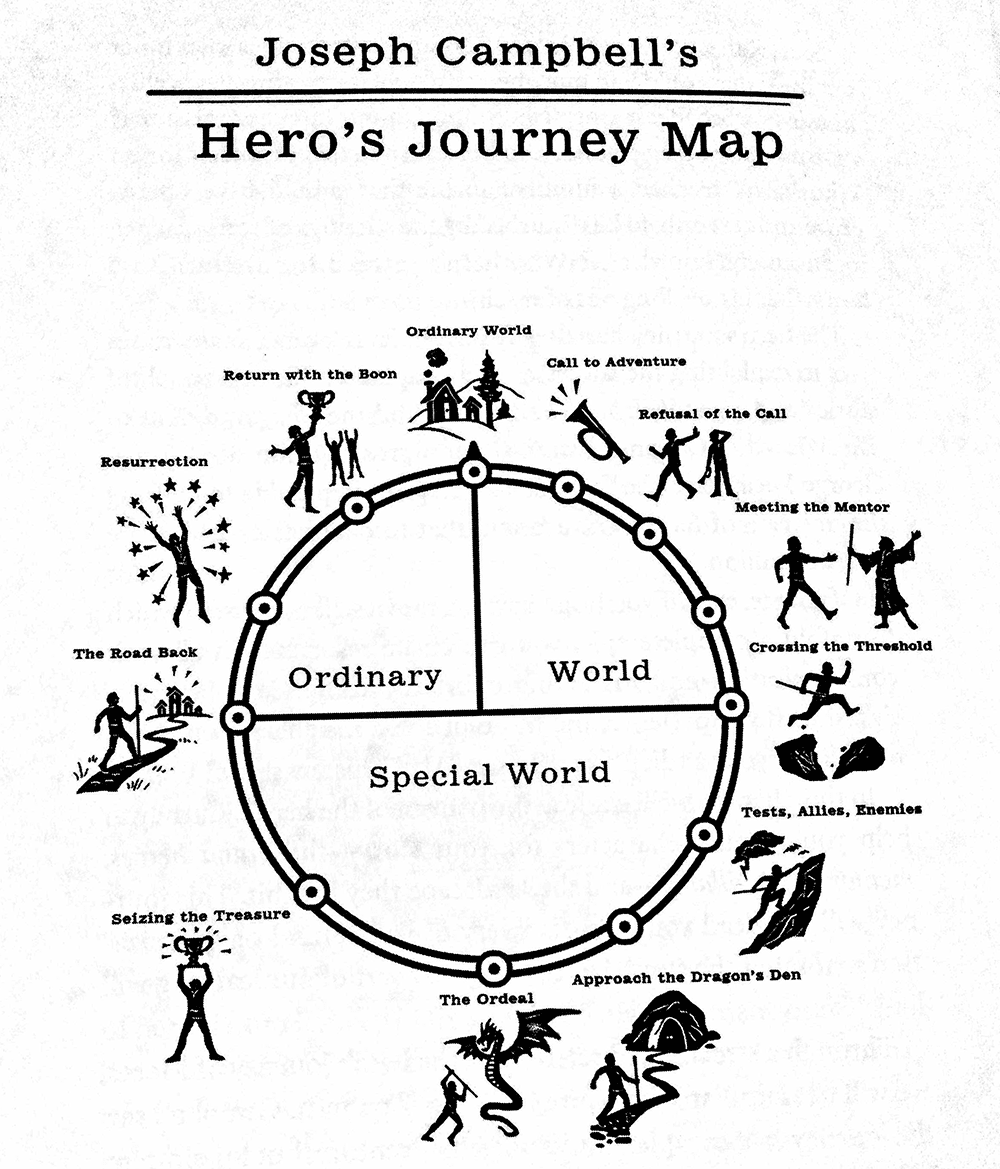 image via Winning the Story Wars

That is why the true purpose of Winning the Story Wars is adapting the key principles of Campbell’s work to the modern world of marketing in what Sachs calls The Digitoral Era. This is something I wrote about in detail here on Elegant Themes in a post called The Future of Blogging, along with some other important ideas for content marketers. If you’re interested in a detailed overview of just Winning the Story Wars however, then I’d recommend checking out another post called Archetypal Marketing in the Digital Era.

Those posts and the books they draw from are about understanding the theory that makes story based marketing possible in a broad sense, with an emphasis on developing your brand around a core set of values; much the same way a fairy tale is modeled around a moral. The three keys below however, are specific to individual pieces of content and how to package them for maximum impact on the internet. They are the key differentiators that Sachs discovered most (if not all) viral content has in common. A not insignificant addition to the older ideas he spends most of the book building upon and quite possibly his most important original contribution to the conversation.

These three keys to creating viral content are based on assumptions about human behavior described in the social intelligence hypothesis. As Sachs puts it, “the greatest evolutionary pressure for social animals comes from our need to interpret the identity, status, and intentions of other humans and to use the information we get to our best advantage. This is what nature has designed us to do.”

So what happens when we hack those instincts?

Ideally, we are able to instantly grab the attention of other humans and encourage them to engage with us. But that still doesn’t tell us how. That’s where Sachs three keys to being interesting come in very handy. The first is called “Freaks”.

A freak is anyone that is dramatically outside accepted norms. This is not meant to be a derogatory term. In fact, many people desire to be a freak (in this sense) because they desire to be seen as something other than average. This is why pictures of photoshopped muscles or ultra sexualized bodies dominate click-bate banner ads. They are “freaks” that have somehow been born or otherwise morphed their bodies into what others consider impossible shape. This phenomenon immediately piques our interest and demands our attention.

A cheat is anyone who has managed to evade or overcome an established obstacle. Someone who not only got away with violating a law, an established tradition, or code of conduct but who has flourished because of it. This is easily identified as the person who has learned “that one weird trick to success” or “lost over 100 pounds without diet or exercise” or any other number of “cheats” you can imagine.

Familiars are those who we recognize as belonging to our tribe or in a more generic sense someone with whom we are literally familiar with and trust. Things like fashion, accents, turns of phrases, and more are all identity markers that can turn a complete stranger into a familiar. This is particularly obvious in political campaigns as politicians use regional aphorisms and clothing to ingratiate themselves with voters. The ultimate “familiar” however, is a celebrity. Someone who you have become familiar with and (if you like them) trust. This is why celebrity endorsements have long been a successful marketing strategy.

How to Get the Most Out of The 3 Keys

So those are the three keys. As I mentioned above, they’re a lot like guidelines. They’re very flexible and open to interpretation. Which means there’s no getting around the fact that to use them you will have to understand them as concepts and apply them to whatever it is you’re working on. This isn’t exactly paint by numbers. But there are a few best practices you can follow along the way to help make sure you get the most out of them.

One of the worst things you can do with a Freak, Cheat, or Familiar within your content is use them to deceive the audience. You may get their attention, but that attention can quickly switch from curious to angry resulting brand damage instead of positive exposure.

Connect Them to Your Brand Values

Instead, always connect the use of a Freak, Cheat, or Familiar with the values the make up the core of your brand. This will ensure an alignment between what you stand for and how you craft your content.

Be Intentional with Your Presentation

Along those same lines, try to make sure you always choose a Freak, Cheat, or Familiar that is appropriate for your brand. If your brand is a charity dealing with serious global issues, then you may want to craft a different sort of “Freak” than say, Old Spice uses in its brand of absurd comedy.

The use of Freaks, Cheats, and Familiars should be folded into a larger content strategy that takes into account standard best practices.  This will ensure that you’re content is being used in an intentional manner with a larger goal in mind than one potentially viral moment.

Creating viral content is a tricky business that many have failed at in the past. However, given the years of study many marketers have done on the subject some guiding principles have emerged. I have found that Jonah Sachs’ Freaks, Cheats, and Familiars are particularly insightful. I see them in successful (and occasionally not so successful) marketing efforts all the time. In my experience, the difference between the two are those who take the time to align these keys with the rest of their brand in a positive way and those who attempt to use them as cheats in and of themselves–which proves hollow.

What do you think of the idea of Freaks, Cheats, and Familiars? Feel free to take a minute and share your thoughts or jot down a question in the comments below.