Wondering how page speed affects search engine rank? People always tell you that you “need to speed up your WordPress site”. But does your site’s speed actually have any effect on where your site ranks in the search engines?

The short answer? Yes. And I’m going to tell you why it does. But I’m not going to just take Google’s word for it, either. In this post, I’ll explain:

What Does Google Say About Page Speed and Search Engine Rankings

Google rarely shies away from using their bully pulpit to push site owners to adopt certain strategies/technology. Their recent mobile popup penalty is proof enough of that!

Similarly, page speed is one of those things they’ve had no trouble talking about. As far back as 2010, Google has publicized the fact that they use “site speed” as a ranking signal.

So, as far as the public line from Google goes, page speed does have an effect on search rankings.

But What About Google’s Mobile First Index?

Back in 2010, mobile search was not nearly as popular as it is today when it makes up almost 60% of Google searches.

While site speed is not a factor in Google’s Mobile First Index quite yet, Google is working on rolling it out. And it’s likely that site speed as a ranking factor in mobile search gets released at some point in 2017, so site speed will soon be an official ranking factor across the entirety of Google search.

What Does the Data Say About Page Speed and Google Rankings?

Ok, so everything above is what Google says publicly about page speed and search engine rankings. But, Google is not always 100% forthcoming about their algorithm.

And because the only time Google will publicly release their algorithm is when there’s a whole family of pigs flying overhead, we’re probably never going to know just how much page speed affects search engine rankings.

But…that doesn’t mean we just have to 100% take Google at their word.

Some intrepid data scientists (with computers powerful enough to analyze millions of search engine rankings pages) have tried to find out how just much page speed affects Google rankings in real life.

I’ll get into a few of these studies below. But before I do that, I want to lead with one important note:

These studies are only noting correlations. That’s not a failure of the studies – it’s just a natural consequence of trying to make sense of an algorithm that’s as complex as Google’s is.

That is, there are far too many variables at play to definitively say “having lower page load times caused this site to rank higher”. It could just be that sites that pay attention to page load times also tend to put more of an emphasis on on-page SEO and link building. Or any number of other factors! It’s a small, but important, distinction.

That doesn’t mean the studies are worthless, though. We can still draw conclusions like “sites that rank higher also tend to have faster page load times than the average site”. And while that’s not definitive proof, it is a pretty good signal that page speed has at least something to do with rankings.

Ok, here’s what the data says.

They were looking at a variety of factors, but one of those factors was…drumroll…site speed.

Here’s how they did it:

They used Alexa’s domain speed metric to find the median load time of the 1 million domains in their data set. Keep in mind – that’s another important distinction. They weren’t looking at the page speed of the specific page in the SERPs, but rather the average page speed of every page across the entire domain.

You can view the full chart below: 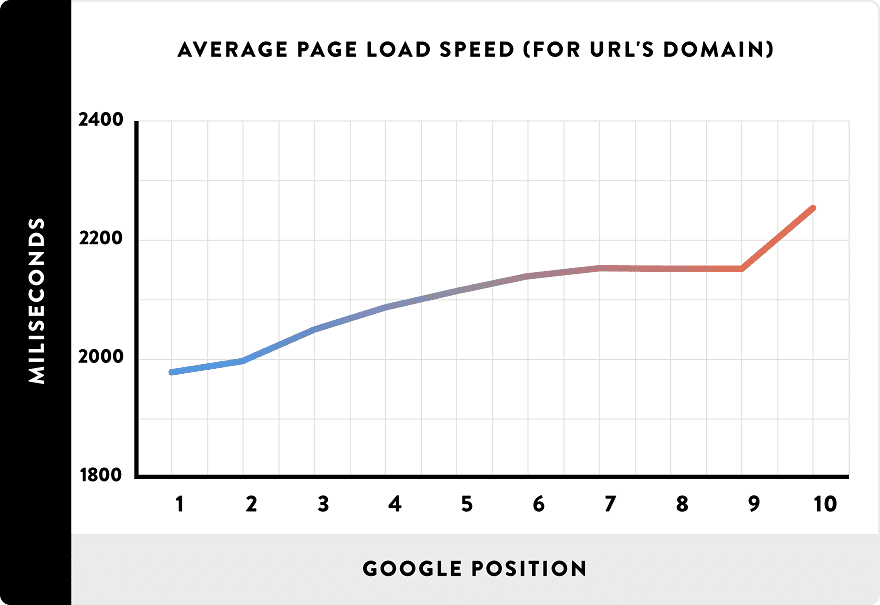 Neil Patel, in conjunction with Ahrefs, also dug into the question of speed and Google rankings. This study is especially interesting because he actually broke page speed down into even more specific metrics like:

You can view the full chart below:

If you’re interested, Neil’s study also digs even deeper into how search rankings correlate to specific metrics like time to first byte.

Just to throw a (small) wrench in things – I’ll end with a 2013 analysis from Moz of 2,000 random search queries that found “there is no correlation between “page load time” (either document complete or fully rendered) and ranking on Google’s search results page”.

For clarification, document complete is what most humans would consider as a page being fully loaded.

However, where Moz did find a correlation is in time to first byte – essentially how quickly a server responds.

Basically, Moz’s findings can be roughly summarized like this:

Whereas full page load times can be influenced by a variety of tactics like caching and compressing images, time to first byte is mostly dependent on your back-end infrastructure.

You can view the full relationship between time to first byte and search ranking position below: 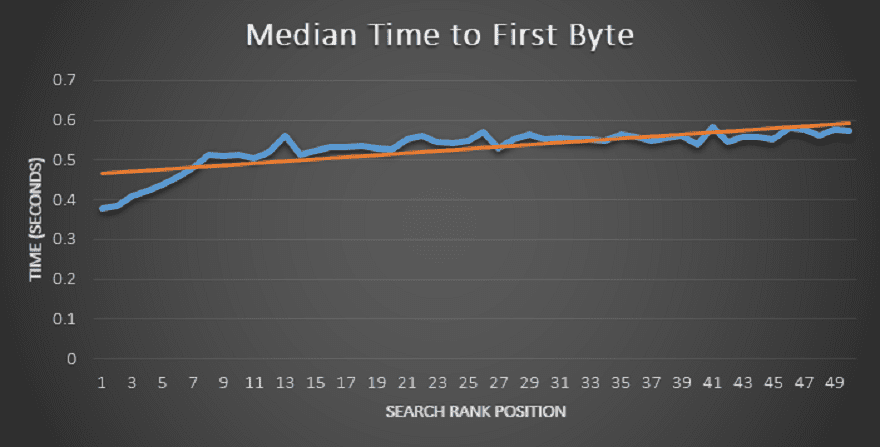 Like I said, this is the oldest and the smallest analysis, but it’s still an interesting addendum to the findings of Backlinko and Neil Patel.

So, What Can You Do About Page Speed and Rankings?

Okay, so at this point, we’ve determined that:

So how does that actually affect your site? What can you do about it?

Unfortunately, you can’t really fake it. You need to…actually speed up your site. Even if page speed had zero affect on search rankings, you still should speed up your site for the user experience and conversion rate benefits of a quick-loading site.

Here are some ways in which you can speed up your WordPress site. Because we’ve covered many of these topics on the Elegant Themes blog already, I’m going to link you out to additional resources instead of trying to reinvent the wheel.

For general WordPress speed tips, these are good reads:

And if you’re interested in specifically speeding up the mobile version of your site, you may want to look at integrating Google AMP for WordPress.

And remember – it’s not necessarily just about full page load times – you also need to consider time to first byte, in which case quality managed WordPress hosting can help.

Between Google’s public pronouncements and the actual data that’s available, it’s fairly certain that there is at least some relationship between site speed and Google rankings. And while that relationship may currently be restricted to desktop search, it’s coming to mobile soon.

So, if you haven’t already put the time into improving your page load times, you need to now. And you similarly need to remember that it’s not necessarily just about what a human would consider as a site’s page load time. You also need to consider more technical aspects like how quickly your web server responds to requests.

Now over to you – do you have any personal experience with page speed and Google rankings? Did you notice a boost after speeding up your site?