WordPress has a commenting system built directly into the core. Unfortunately, it has not changed since WordPress was launched in 2003. Most WordPress users address its deficiencies by installing commenting plugins that enhance the functionality.

Without installing a comment plugin, WordPress lacks importance features such as social media integration and the ability to update commenters of new updates. It also suffers badly from spam; which is why every single download of WordPress comes packaged with the anti-spam plugin Akismet (for more information on reducing spam, please check out my recent article “How to Reduce WordPress Comment Spam“).

Due to these reasons, many WordPress users use an external commenting system instead. There are many benefits to switching to a third-party solution such as allowing your readers to leave comments using their existing social media profiles.

In this article, I would like to show you six external commenting solutions that are available to WordPress users.

DISQUS is one of the most popular external commenting solutions available online. It has a clean responsive design that looks great on desktops, tablets and mobiles.

Features include threaded replies, subscription via RSS, updates via email and logins via Facebook, Google+ and Twitter. It also has great support for images and videos. 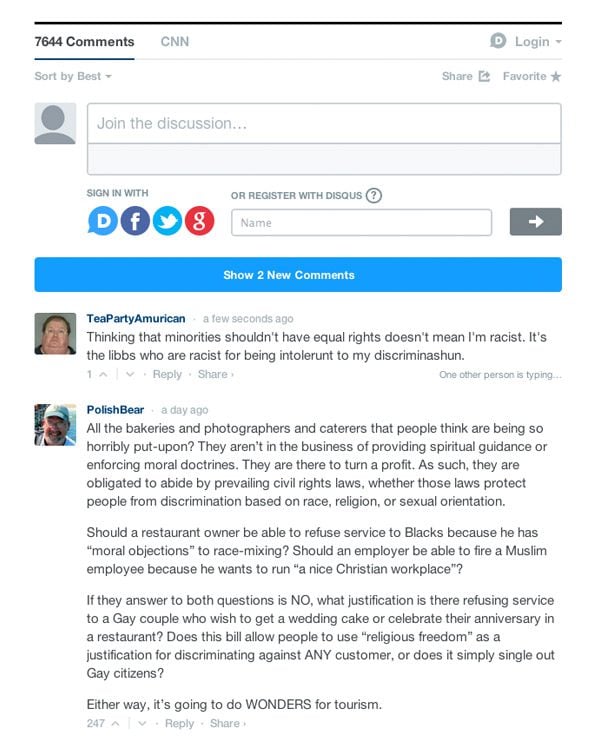 DISQUS is one of the best commenting solutions available.

DISQUS has a great administration area that lets you filter spam and create blacklists and whitelists for commenters. The DISQUS WordPress plugin imports existing comments into your DISQUS account and will automatically sync any new comments back to your WordPress database. This means that you will never lose any comments if you switch back to the default WordPress commenting system at a later date.

The main rival to DISQUS is LiveFyre. It is used by many top websites such as Mashable and Engadget. 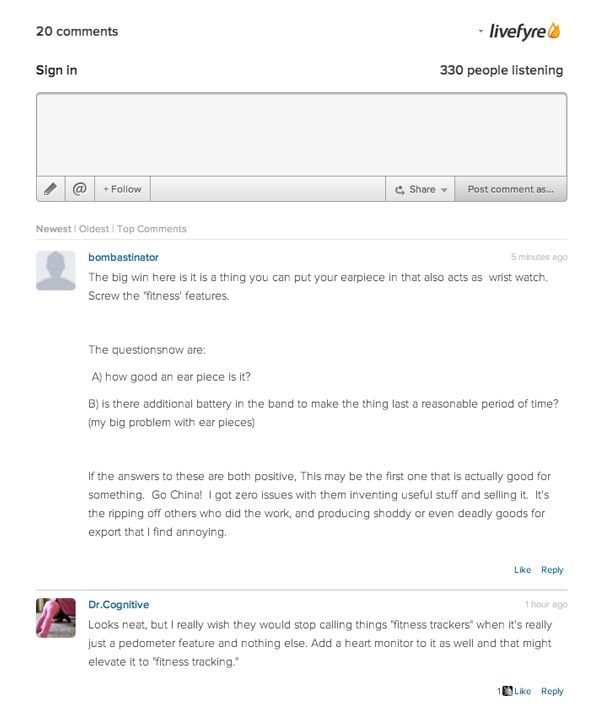 Livefyre is packed full of great features such as tagging people from Twitter in comments.

Like DISQUS, the Livefyre WordPress plugin syncs all of your comments back to your website database so that you can easily switch back to WordPress’s commenting system at any time.

Some of you may be surprised to hear that the developers of WordPress (Automattic) have their own external commenting solution. Intense Debate features threaded comments, email notifications, reply by email, social media support and more. 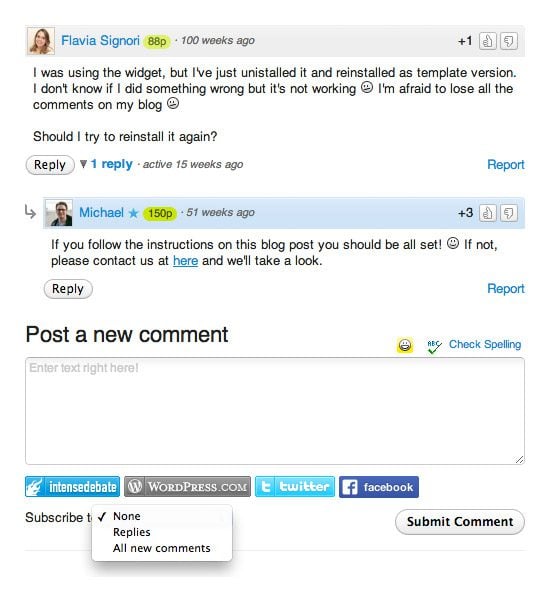 Automattic have unfortunately not got behind their Intense Debate project.

You would have assumed that Automattic would be fully behind Intense Debate, yet they have never really given it support since the service launched at the start of 2007. The Automattic home page has over a dozen projects listed, yet none of their projects use Intense Debate for commenting.

Reading between the lines, Automattic do not want to give up on Intense Debate, however they do not want to devote any time or money to it either. Until they do, I would look at an alternative commenting solution.

It is easily recognisable by its unique emoticon feature that lets you rate comments from other users as intellectual, worrisome, funny, a question or maddening. 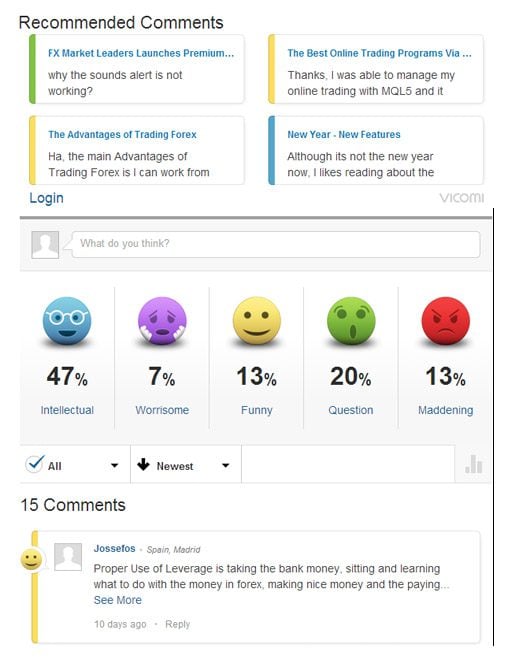 You will either love or hate the emoticons that Vicomi uses.

The Vicomi WordPress plugin states that all data comments are stored on their server. Unfortunately, comments are not synced back to your own database.

The comments box is fast and allows comments to be ordered by time or quality (aka Social Relevance). Since people tend to use their real name on Facebook, implementing Facebook comments on your website should cut down on spam.

From an administration point of view, Facebook does not offer the same functionality as alternatives such as DISQUS and Livefyre and comments are not backed up on your website database. There are a lot of people who do not use Facebook, therefore using Facebook exclusively for your comments will stop many people from posting comments.

It is, however, a good solution for those of you who heavily use Facebook to promote your website.

Google+ has been integrated into many Google services such as Blogger and YouTube. With the growing popularity of Google+, it is being adopted by many website owners.

There is no official WordPress plugin from Google, however there are plugins such as Google+ Comments and WordPress Google Plus Comments that allow you to integrate Google+ comments with your website. 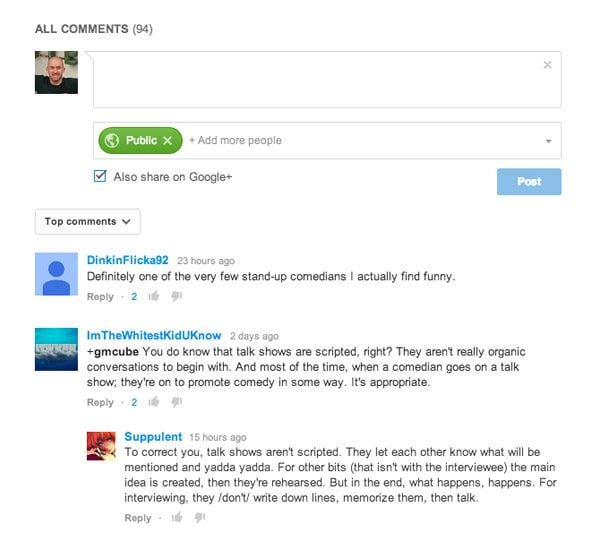 Google+ is growing in popularity.

Like Facebook, using Google+ as your only commenting solution limits who can reply on your website and means that comments are not stored on your website database. You should bear this in mind before switching to it.

There are a lot of pros and cons to using an external commenting system. It is therefore important to test out a service before using it on your live website.

For most types of websites, I’d sway towards using either DISQUS or LiveFyre as they offer the most features and support the most social media services. They also sync comments back to your own database, which makes it easier to switch to another solution later (it is worth noting that not storing any comments in your website database will result in the database being smaller).

There are, of course, exceptions. For example, I am using Facebook to heavily promote a new website I am launching, so it makes sense for me to use Facebook for comments as most visitors will be Facebook users.

If you do not like any of the third-party solutions mentioned above, I recommend checking out Comments Evolved as it supports Google +, Facebook, DISQUS and WordPress.com logins. The comment module in Jetpack is also a great option.

As always, please let us know what you think about third-party commenting solutions in the comment area below 🙂