Tumblr is one of the most popular free blogging platforms available on the web.

Moving to a self-hosted WordPress website is a popular solution, but a quick search through Tumblr’s Help section only reveals that users can’t import their archives from other platforms to Tumblr. Nothing is said about exporting them to other platforms.

Why You Should Move from Tumblr to WordPress

If you’re still on the fence about whether it’s worth moving to a new blogging platform, it may be worth reminding yourself of some of the major benefits you’ll get once you’ve completed the move.

The biggest difference between Tumblr and WordPress is that WordPress is open-source software, while Tumblr is not. This means that you can do anything you want with your WordPress site without being limited by access barriers that free blogging platforms like Tumblr have in place.

Tumblr certainly does have lot of great free and premium themes for users to install, but WordPress absolutely blows Tumblr out of the water in terms of theme choice and customization. You also get access to over 42,000 plugins that bring all sorts of cool new features to your WordPress site without having to do any of the coding yourself.

The Tumblr dashboard is easy to use, but it doesn’t offer anything near what the WordPress dashboard offers. While Tumblr’s dashboard is mainly built to serve its social networking purposes, WordPress is all about functionality – enabling users to manage everything from their posts and media, to their comments and plugins.

For a more detailed comparison of how both platforms differ, you can check out our WordPress vs. Tumblr piece to see how each of their feature offerings stack up against each another.

What to Do Before You Start Migrating

Migrating Tumblr to WordPress can all be done with the help of the free Tumblr Importer plugin. It’s the fastest and easiest solution available right now, but there are a few things you’ll want to consider doing prior to starting the migration process (as suggested by some of the reviewers of the plugin) to make sure it all goes smoothly.

If you’re using JetPack, IFTTT or any other plugins that handle social media and auto-posting, it’s a good idea to disable them to avoid any duplicate posts or other potential interferences. You may in fact want to disable all of your plugins just to be safe.

If you have images in your Tumblr posts, you may want to dig deeper into understanding how your current WordPress theme handles images. According to the plugin author, images taken from Tumblr are imported to WordPress at their full sizes, but some themes may present those taken from photo set posts in Tumblr as gallery images.

If you’re just really not sure about how the migration will go, you may want to consider testing your WordPress site with the plugin first by creating a new Tumblr blog in your existing account with just one post. This way, you won’t have to delete hundreds or possibly even thousands of posts from WordPress if the migration doesn’t work the way you expected.

To create a new Tumblr blog, access your account options from the top right corner of your Tumblr dashboard and click + New beside the Blogs option and fill in the fields to create it. Publish at least one new post to this blog so that you have something to import to your WordPress site as an initial test.

We used a a Creative Commons photo from Unsplash and some lorem ipsum text. You can delete this blog once you’ve finished testing the Tumblr Importer plugin on your WordPress site. 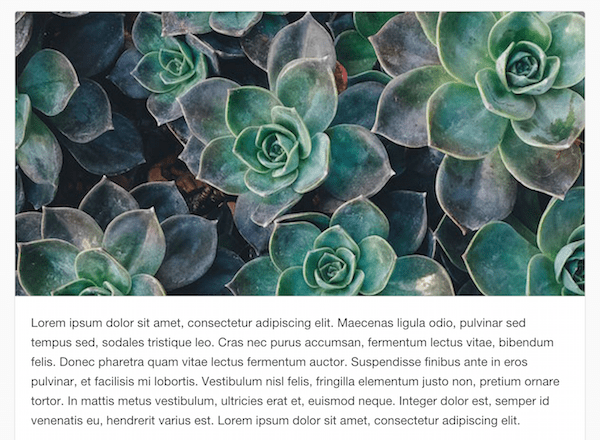 Here’s a complete walkthrough of the exact steps you need to take to migrate your Tumblr blog to your new WordPress site. It should only take you a few minutes to complete.

Getting Started with the Tumblr Importer Plugin in WordPress

In your WordPress dashboard, hover your cursor over the Tools option on the menu and click on Import. From the given list of platforms to choose from, click on the Tumblr option. 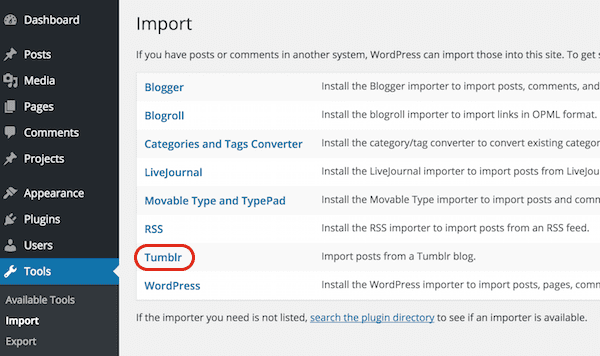 You’ll be asked to download and install the Tumblr Importer plugin, which is the tool you’ll need to handle the whole migration process. Click on Install Now to install it, then click on Activate Plugin & Run Importer once the installation is complete.

Now that the plugin is set up on your WordPress site, it will need to access your Tumblr account to import your content. To do this, you’re asked to create an app on Tumblr to provide a connection point between your site and Tumblr’s servers.

Creating an OAuth App in Tumblr

The Import Tumblr plugin tells you all the instructions you need to create your app, but we’ll show you all the detailed steps with screenshots to make sure you know exactly how it’s done.

First, open a new browser tab or window and go to tumblr.com/oauth/apps. On this page, click the large green button labeled + Register application. 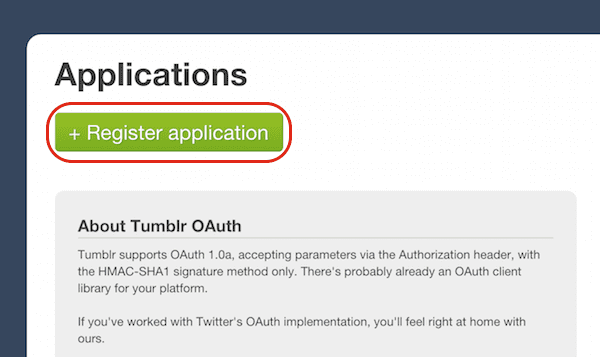 The Application Name and the Application Description can be anything you like. For the Application Website and Default Callback URL, your WordPress website URL should be used for both of them, but be sure to check what step three says on your own version of the Import Tumblr plugin to be sure you fill out those two fields exactly as given.

The Application Name and Application Website fields can be found at the top while the Application Description and the Default Callback URL fields are further down the page right after the Google Play Store URL field. Everything else can be left blank. 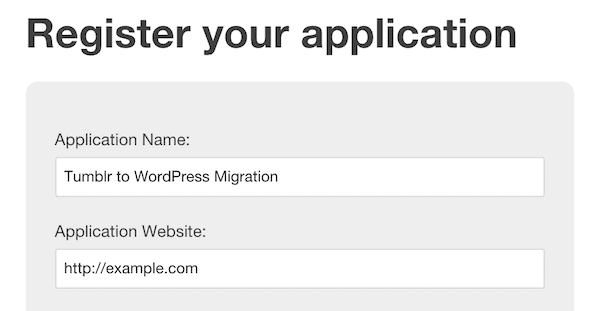 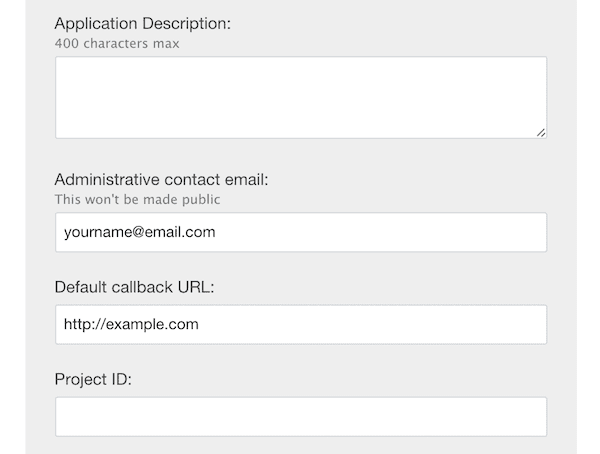 Scroll down to the bottom of the page to verify that you’re not a robot and then click Register.

Authorizing and Importing Your Tumblr Blog

Once you’ve registered your Tumblr app, you’ll be given your OAuth Consumer Key, which will be displayed as a long combination of letters and numbers. Copy that key and go back to your WordPress site to paste it into the OAuth Consumer Key field.

Now you just need the Secret Key. Go back to Tumblr and click the Show secret key link beneath the OAuth Consumer Key to copy that and paste it in the Secret Key field in WordPress.

Click Connect to Tumblr. The plugin will notify you if something isn’t right. If you’ve set everything up correctly, you should be able to see an Authorize the Application link. Click on that.

Tumblr will then ask you if it’s okay to allow the application to access your information. Click Allow.

You can use the dropdown menu under the Author option to select which author you want to assign your imported Tumblr posts to in WordPress. Click Import this Blog and and wait for the migration to finish.

Your posts will be published on your site right away, so you can go ahead and check your website’s blog page to see how it looks.

Our WordPress site for this tutorial uses Elegant Themes’ Divi theme, and while it appears that the text portion from our single post on our Tumblr test blog was imported seamlessly, the image was posted as a gallery image rather than a full-sized image within the post or a feature image.

The test post we made on Tumblr was a photo set post (meant for multiple images even though a single image was used), which is likely why the theme posted it as a gallery. Now you see the importance of doing a test run before you decide to import hundreds or thousands of blog posts. 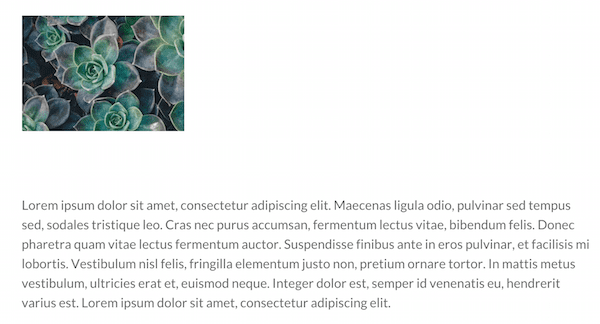 As you can see, the plugin isn’t perfect, and there’s a possibility that all your Tumblr content isn’t going to look exactly the same on WordPress – especially if you used a lot of the different media post types on Tumblr. You may have some image editing to do if you decide to go ahead with it. At the very least, you won’t have to and upload images manually to WordPress because the plugin takes care of that.

All posts will be imported into your default WordPress category and any tags from Tumblr will be transferred over to WordPress, but titles will be left blank in WordPress. You’ll have to go and edit all of those manually, which could be pretty time consuming if you imported a large number of posts.

If you’re not up to manually copying and pasting every individual Tumblr post into your new WordPress site, the Tumblr Importer plugin is a good option to have. Despite having to potentially spend a quite bit of additional time editing images, titles and perhaps some other post components, it will at least save you some time from having to do everything manually.