You get updates to iOS or Android on your smartphones. Gamers get new content patches for World of Warcraft or Call of Duty. WordPress plugins and themes get new features. The software that you use every single day gets updated periodically. When it does, a changelog is published that show you exactly what was fixed or added.

For most folks, even the structure of a changelog is intimidating, which makes them ignore the notes altogether. That’s bad for a number of reasons, not the least of which is the whole Display Widgets fiasco and issues like it (that are sadly pretty common).

So let’s break down what a changelog is, how to read release notes, and make sure that you stay as up-to-date and informed as possible.

Different companies and developers approach their changelogs differently. Some are straightforward and tell you exactly what the update does in technical terms, while others (as you can see in the example below from a recent Slack update) go for a more readable (and often humorous) approach to informing users about new stuff. 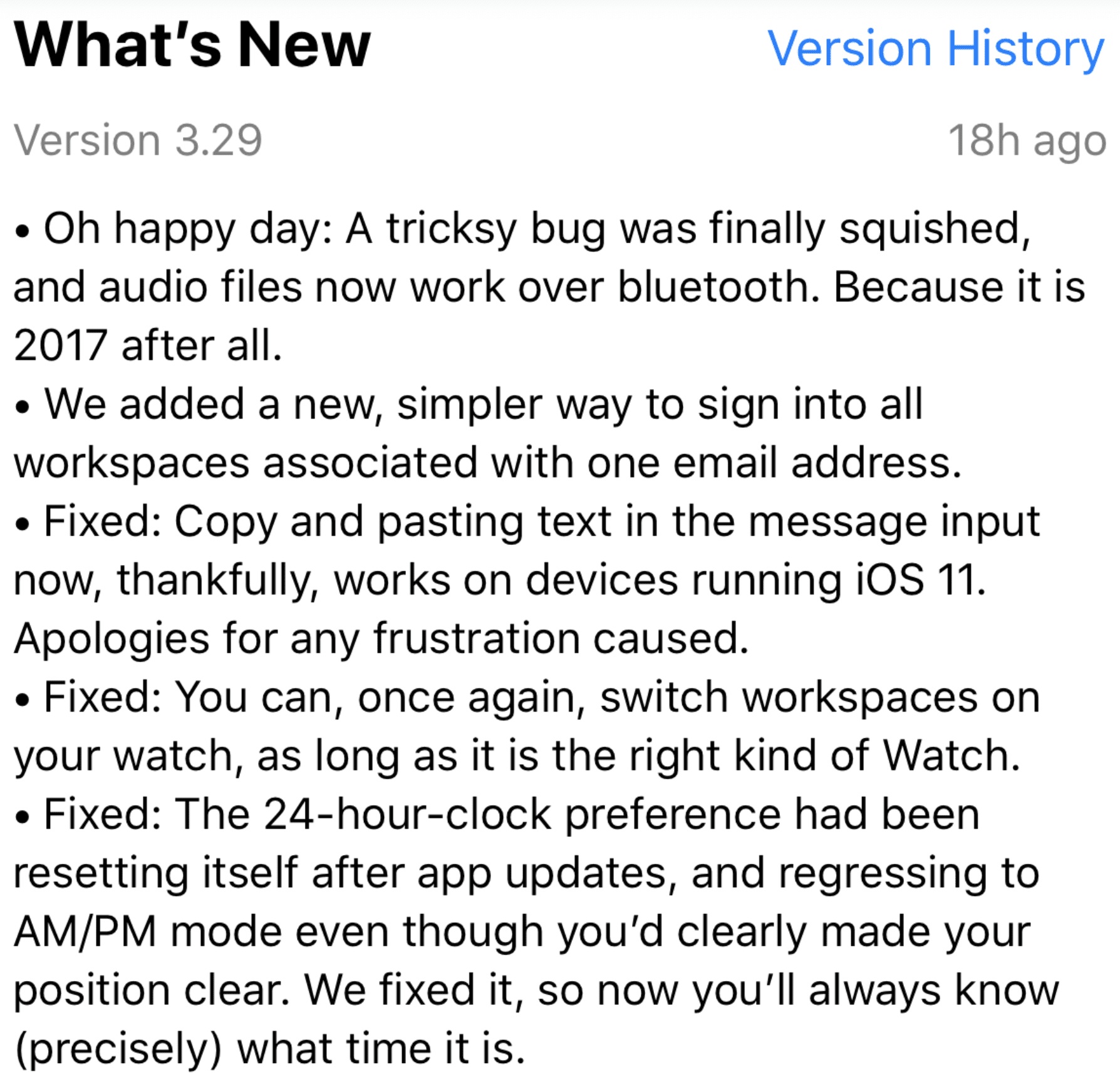 For example, WordFence is a security plugin that can’t afford to be flippant in their notes. Too many people have too much riding on them, while Slack’s whole brand is about being approachable and fun. 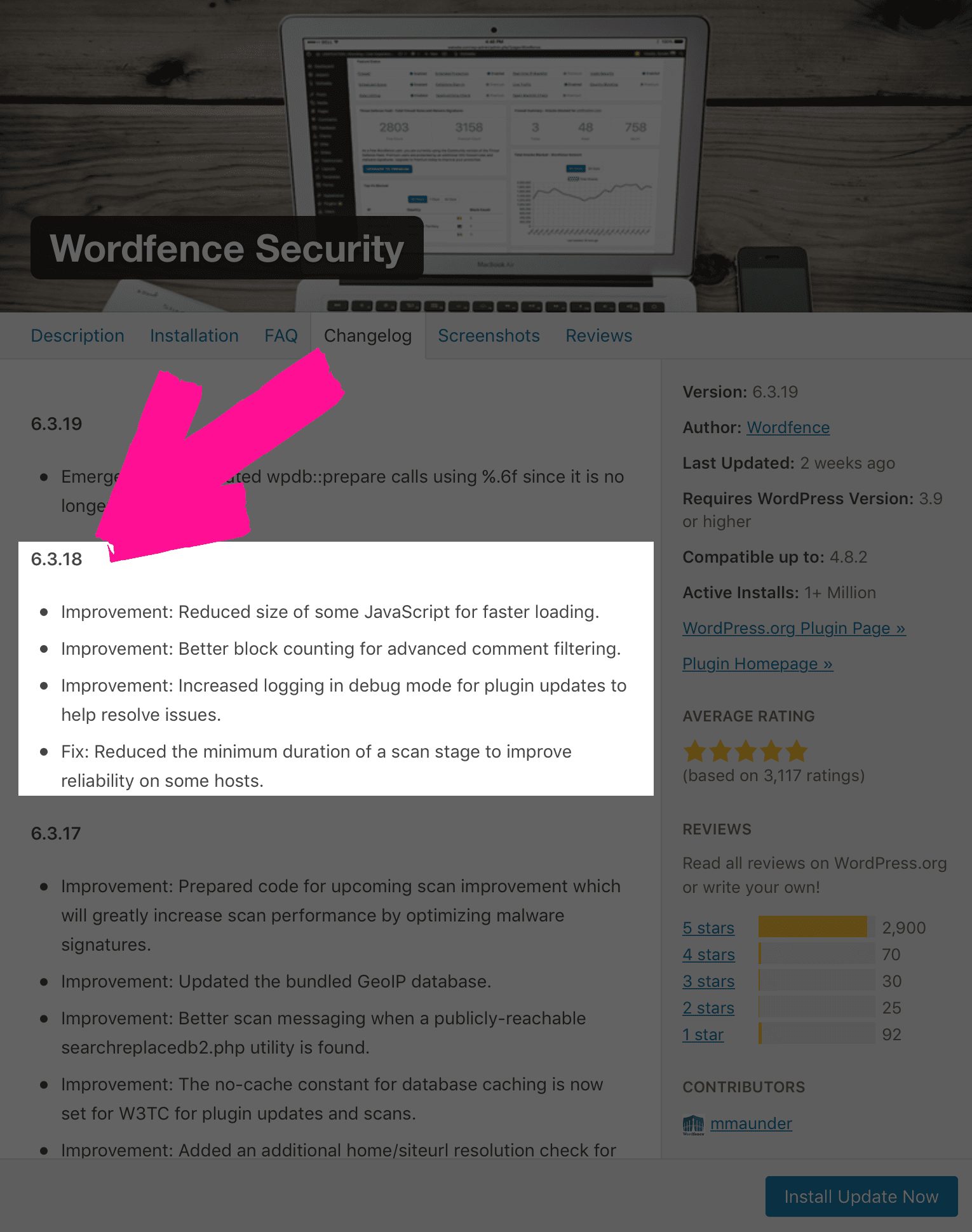 In general, these are the two kinds of release notes that you’ll see. If you’re involved in development, however, you will see far more obscurely written changelogs. Unless you go poking around Github you’re not likely to find any that are totally incomprehensible.

The importance of the issues being addressed by the changes also dictates tone. If Slack, for example, were the victim of a data breach from a code vulnerability (God forbid), the patch notes for the fix would be somber and reassuring.

In the end, though,

The primary structure of a changelog is pretty simple. You have a version number made up (usually) of two or three numbers separated by decimals—2.39 or 1.3.37 and a bulleted list of what goes along with each release.

Each of these numbers has a specific function. We’ll break them down in general terms so you will know what you’re looking at. Because you’re always gonna have notifications that you have an update pending.

The first number in a changelog indicates the primary versions of the software, the major releases, the number of times the software has been released with significant improvements that change overall functionality.

For instance when you’re iPhone updates to iOS 11, you’re technically updating to version 11.0.0. Same for when you get Android Oreo—it’s version 8.0. Generally when the first number of a piece of software is updated, you will get a significantly different experience than before.

If you’re a gamer, think about expansions being major releases. World of Warcraft’s first release in 2004 was version 1.0, while The Burning Crusade was 2.0, and the current expansion, Legion, was 7.0.

With Divi, the release from 2.7 to 3.0 was a reworking of the Divi Builder to the brand-new Visual Builder, which brought about a big ole change for everyone.

The second digit is where you see new features that get added or bugs get fixed. The second (and third) digits are called point releases because they’re read aloud like “seven point three point four.”

These additions can change an aspect of the app or plugin, but not the base functionality like a major release will. When Divi adds a new module or when iOS or Android add in new emoji, you’ll get it in version 3.1 or 10.3.

For WordPress plugins, take a look at Yoast SEO. Version 5.5.0 gives a few bug fixes and enhancements, but there’s nothing earth-shattering here. Basically, you don’t have to relearn how the software works with point releases. 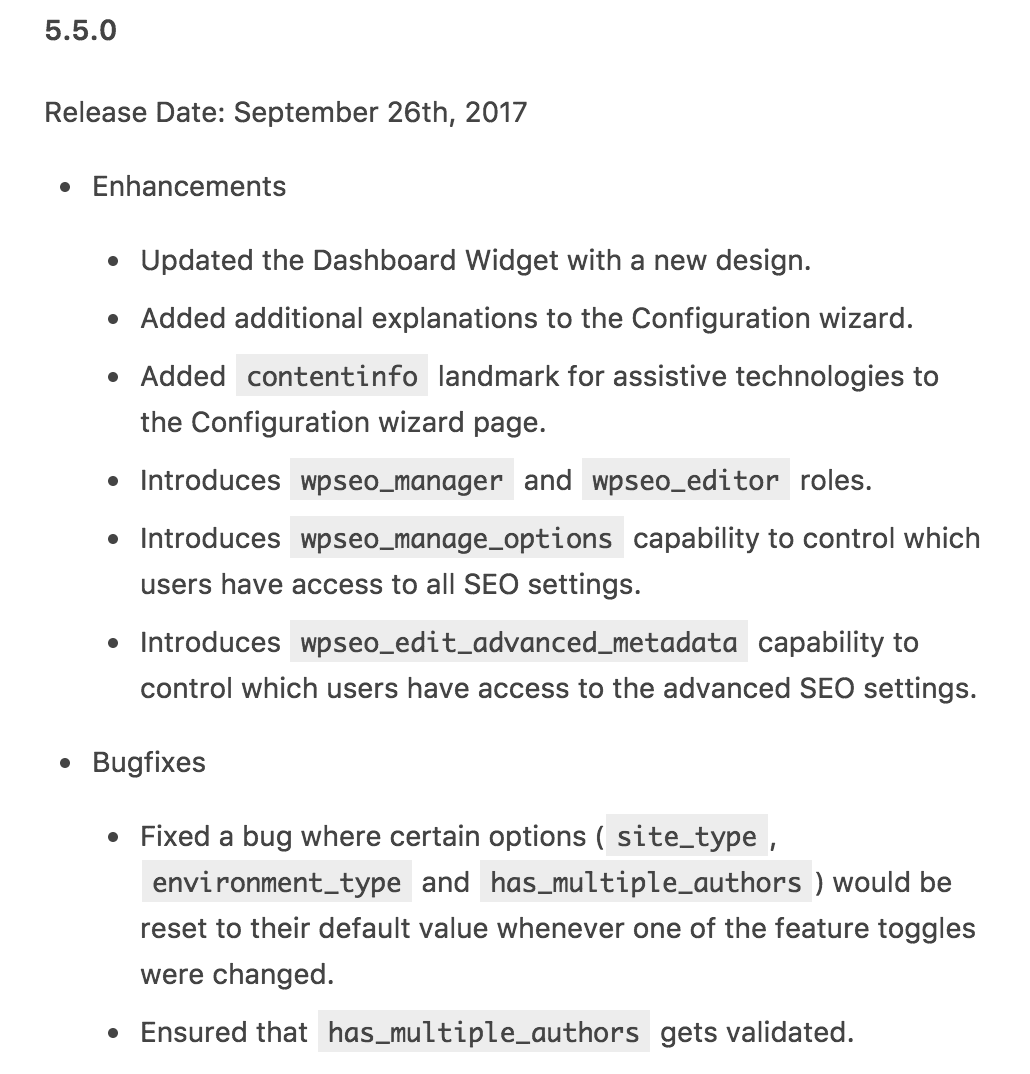 These point releases are going to be when you get new levels or systems in video games. As you can see below, version 2.2. to 2.3 of the Kingdom Hearts mobile app added a pet system. That doesn’t change how the game plays, but adds something on top of what’s there already. 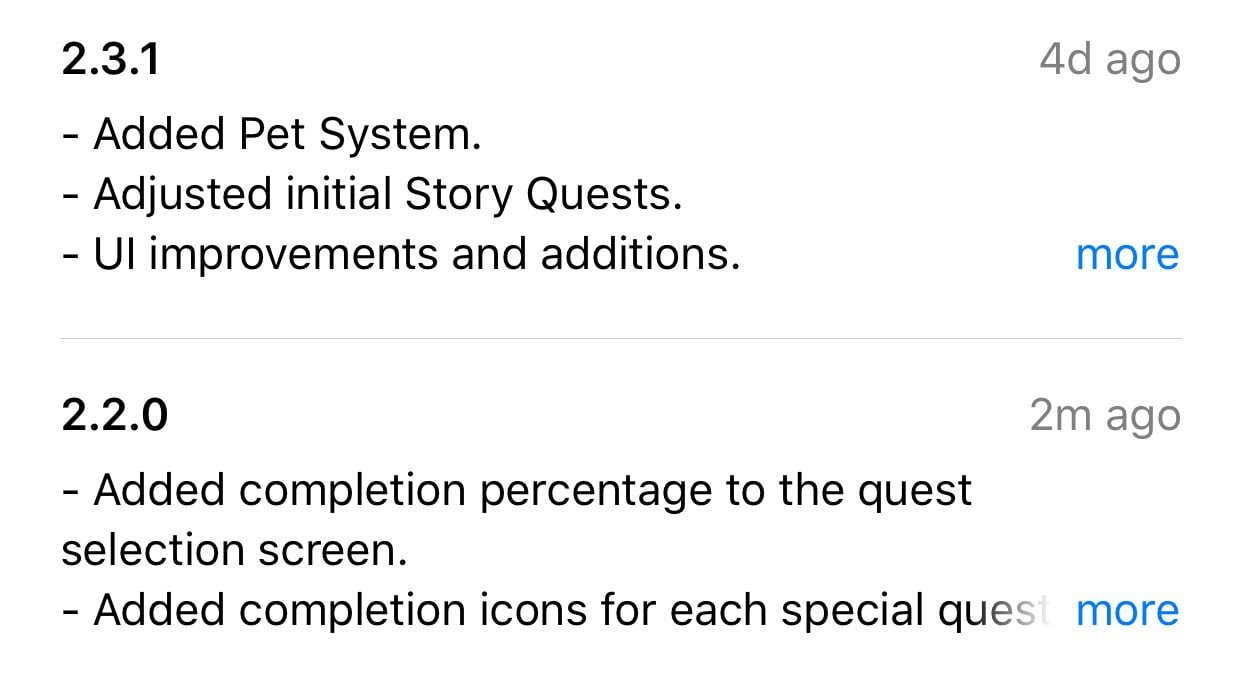 The with the third-and-final digit of release notes, your changelog is likely going to be full of minor bug fixes (at best). Or probably some background changes/improvements that you probably won’t notice.

Facebook is notorious for these kinds of point releases. Their apps are updated on a weekly basis, and they may change little to nothing that (most) users will notice with daily use.

Often, these minor point releases are what’s called a “hotfix.” Those are just patches that address an issue that most users don’t even know exists. Most of these hotfixes fix something like a font being broken on a certain browser version. Or maybe a memory leak on a specific operating system. Often these fixes are labeled as something generic like “compatibility issues.”

Sometimes, you’ll get a hotfix for an issue the developers see as something that can’t wait for the next content patch (or regularly scheduled update). Again, that may or may not affect you.

As you can see in the updates made to Yoast from 5.3.2 to 5.3.3, the updates are relatively minor but important in “certain situations.”

Changelog in the Wild

Just as an example, take a look at the release notes/changelog for Divi over a few major releases. Between 2.7 and 3.0.1, you can see the kinds of changes that were made. Some major (the release of the new Visual Builder) and some minor (font changes for just WordPress 4.6).

We are currently at version 3.0.78 as of this writing. Until now, the changes have been relatively subtle additions and tweaks. They’re important and awesome, and we are super proud of them, but those 78 updates from the release of 3.0.0 to now are iterative to make Elegant Themes members lives better. When 3.1 comes you know it’s going to be superb.

Pay Close Attention to Your Changelog

You should always read the changelog that comes with any plugin, app, or theme update. As noted in the Wordfence article I linked above, plugins do get sold. Even if you trust the original developer (and the new one might be just as trustworthy), you should be aware of that change in ownership.

The changelog is where you will find out about that kind of thing. Not every update and addition will change your experience. It’s always a good thing to at least glance over the notes to see what’s different, though. Staying informed is definitely worth the 30 seconds it takes to read over the notes.

And here’s the thing: if you don’t fully understand what you read, that’s okay. In fact, that’s normal. A changelog is a transparency document and a record, not a quarterly update or email newsletter.

While this is dangerous to say, my feeling is that if you don’t understand what’s in the changelog, then that issue probably doesn’t matter for you. (And if they do, they matter to other people, too, who can and will break it down for others online.)

The important thing is that you understand the basics structure of release notes. You should know what the numbers and terms mean. And you will eventually learn how to scan changelog to find the important information.

You don’t have to be a developer (or even a techie) to get use out of a changelog. You just have to know what to look for.