If you’ve ever tried to get to grips with responsive web design, you’ll know firsthand that it can be frustrating. Making sure your site looks great on just about every device is a daunting task. What’s more, being uncertain about how your site’s design will appear on a particular device could end up with bounced visitors. CSS media queries are a simple way to help create a responsive website.

SimpleCSS is an online tool that generates media queries for you based on your breakpoint or platform, and in this post we’ll show you how you can generate them in three clicks. To round up, we’ll also show you how Divi implements media queries out of the box.

An Introduction to CSS Media Queries

CSS media queries are a cornerstone technology of responsive web design. The CSS @media tag is used to set style rules based on different media types and devices. In simple English, media queries evaluate the capability of the device that is accessing your web page, and checks for its properties. These generally include:

Responsive web design focuses on adapting your site to be used on different devices. For instance, there’s a significant difference in user experience between a visitor using a mouse to navigate through your site, versus a touchscreen. Media queries enable web developers to bridge the gap in their site’s design: 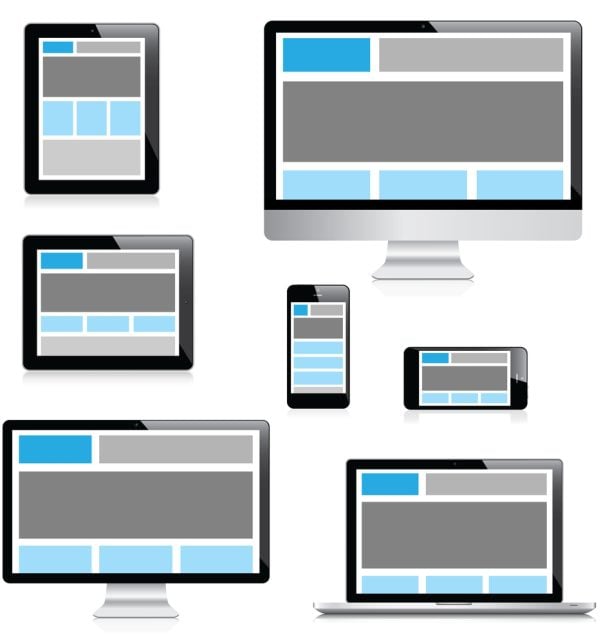 Rewriting your site’s code to cater to each of the hundreds of devices that access your website simply isn’t feasible. Media queries work by using the same underlying HTML code, adjusting to the device’s screen size and orientation dynamically based on simple rules.

CSS3 enables web developers to define styles based on the device’s page width. Since the device’s page width correlates with its size, developers can essentially define different layouts for devices of various screen sizes by simply adding conditional rules in media queries. Some of the most commonly used expressions used for writing conditional rules are min-width, max-width, and orientation.

In a nutshell, media queries basically find out how big the device’s screen is, then apply some specific CSS to that screen size.

Of course, creating all of these media queries can quickly become a pain. SimpleCSS is an incredibly useful tool for generating them, helps to take all of the heavy lifting out of targeting specific devices, and negates messing around with conditional expressions. Let’s take a look!

As the name suggests, SimpleCSS is an easy-to-use tool that enables web designers and front end developers to generate media queries for specific devices. Once you select a device, the tool outputs a media query tailored to that particular device, which can then be pasted into your CSS files. SimpleCSS also generates media queries based on breakpoints.

How to Generate Media Queries Using SimpleCSS (in 3 Clicks)

Now we’ve looked at what media queries are, and the tool that makes creating them simple, let’s show you how to generate media queries in only three clicks!

The first step in choosing your media query is to decide on an approach for your responsive design, and you’ll need to select from Mobile First or Desktop First:

If you’re struggling to choose, here’s the skinny on what both mean:

Next, you’ll need to choose a device type.

Once you’ve selected your approach, the next step is to pick from one of five different breakpoints – Small Phone, Smart Phone, Tablet, Laptop, and Desktop. This is simply the points at which your site’s changes to provide an optimal layout for the reader’s device:

Once you’ve selected a device, a modal pop-up will appear containing your media query. From here, simply copy the code and paste it into the appropriate place in your CSS file: 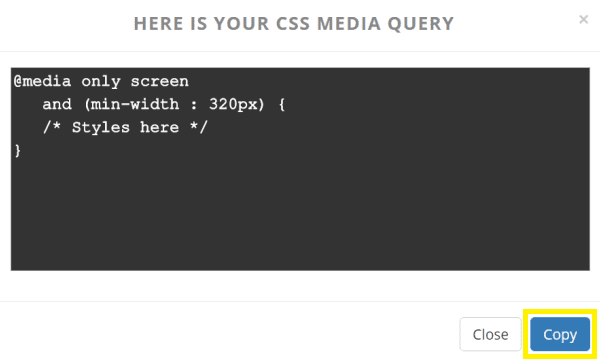 How to Generate Media Queries For a Specific Device Using SimpleCSS

Generating general media queries is fine as a general approach, but what if you need to generate them for a specific device? Let’s show you how to do it – again in three clicks!

Once you’ve selected your operating system, you’ll need to filter down the device options available. There are 286 different devices supported in SimpleCSS, and if the selections are a little overwhelming (especially for Android devices), you can use the search bar to narrow the choices down:

Once you click on the relevant device, you’ll once again be presented with a modal pop-up containing your generated media query, ready to be copied into your clipboard:

That’s all there is to it! You’ll never again have to manually create media queries, and your sites can be one step closer to becoming responsive.

Our Divi theme already implements a responsive design based on media queries, meaning you may not need to generate them yourself. Check out this example to see what happens when you resize your browser’s window:

The theme adapts dynamically to the changing window size – which is the premise behind using media queries. As the width of your browser window decreases, the layout changes ensuring that the content is still easy to read. The three different breakpoints take action, and give Divi’s layout a fluid-like feel. At different breakpoints, the media query that is triggered takes effect, and the layout of the design changes accordingly.

If your website isn’t responsive, it will likely suffer in search engine rankings. One way to ensure your site remains responsive is by using media queries. While they may have been difficult to create in the past, generating them is quick and simple with a tool such as SimpleCSS.

Let’s recap how you can generate media queries in three clicks:

Do you have any questions about generating media queries for specific devices? Get in touch via the comments section below, and don’t forget to subscribe to follow the conversation!