The Current State of the Internet Browser Wars

Web browsers are so ubiquitous today that it may seem odd for many of us to even imagine a time in which the web existed without them. Granted, that time didn’t last long, but it did happen. Which gives rise to interesting questions like: are there other ways we might have chose to navigate the web?

But that might be getting a bit too far off topic.

No, in today’s post, I want to provide the Elegant Themes community with a sort of state of affairs concerning the major web browsers that have come to dominate the market in recent years. And it’s more or less impossible to do that without getting into the ongoing “browser wars”.

What are the Browser Wars?

Simply put, the Browser Wars are the struggle for dominance in browser market share. The more users your browser has the more data and other opportunities you posses for monetization. You also wield more influence in helping to determine future web standards–which, again, can help to steer the way people use the web towards your proprietary code, products, etc.

In the history of the Browser Wars there have been two main conflicts: the first and second Browser Wars.

The first Browser War was between Netscape and the new kid on the block, Internet Explorer.

These days, browsers compete with each other on two main fronts: features and performance. The most successful browser finds the right balance between reliability, speed, security and the right set of features. Each developing their updated versions as quickly as possible in response to the competition.

But this wasn’t always the case.

In the beginning the very concept of a web browser was so novel that it didn’t occur to most users to expect more than what was given to them. That’s why in this first war, the best browser did not necessarily win. It was the browser everyone got by default, for free.

In 1995, Netscape was by far the most popular web browser in the world. It was based on Mosaic, a multi-platform browser developed in the early 90’s that basically became the standard by which all browsers after it would be modeled on.

In fact, both Netscape and Internet Explorer licensed Mosaic in order to create their browsers. Meaning they more or less started off even in terms of base technology, but it was the positioning of each company that gave them their unique weaknesses and advantages.

Netscape’s advantages were that they had been actively developing their browser for longer, resulting in more features and (probably) better performance. Internet Explorer though, had a trump card that literally could not be beat. A near monopoly on desktop operating systems.

To win the first Browser War, Microsoft used their ubiquitous Windows operating system (and the nearly endless financial resources it afforded them) to deliver a deadly combo. First, they packaged Internet Explorer as the default browser in all Windows releases. And secondly, they made it free.

By the early 2000’s Netscape, as a company, was done. They did not have the resources to continue fighting a battle of features and performance against a company that did not have to sell its product and which the bulk of all internet users used by default. But their technology was still in the fight.

In 2004 Netscape open-sourced their browser and entrusted it to a newly formed not for profit organization called Mozilla.

The end of the First Browser War meant that for years Microsoft’s Internet Explorer went largely unchallenged. At their peak in 2002, Internet Explorer had attained 96% marketshare. Something no other browser has done before or since. But, a lack of competition also often means a lack of innovation.

That was certainly the case with Internet Explorer.

From roughly 2002 to 2005 the now infamous Internet Explorer 6 reigned supreme and Microsoft didn’t even bother offering significant upgrades throughout that entire period.

In 2004, Mozilla launched Firefox and the battle was officially back on. This time, users fed up with the sub par Internet Explorer were actually rooting for Firefox to win and their growing user base proved it.

From 2004-2010 Firefox steadily grew in popularity until it peaked out at a little over 30% marketshare. Since then it has had the most consistent market share percentage of the top five browsers. Hovering between 20-30%.

If it were just the two of them, Internet Explorer would still be the undisputed champion. But some other big players entered the Second Browser War and shook things up considerably.

In 2005 the longtime but small player in the Browser Wars, Opera, became free. Having always been a solid browser (lean, fast, secure) with lots of innovative features (tabbed browsing, mouse gestures, and even their own BitTorrent client) their price point was the last hurdle in stopping them from competing at a higher level.

Additionally, Apple and Google, two companies who were not exactly big deals in the 90’s became behemoths in the first half of the 2000’s. After which, both of them turned their attention to the Browser Wars. Apple with Safari and Google with Chrome.

Apple’s main strategy was two fold: 1) make their browser the default browser on all of their devices; and 2) use their clout and influence to dictate web standards that would give them an advantage.

Google also had a two fold strategy: 1) adopt an ultra fast cycle of iterative development; and 2) use their search engine, popular web apps, and considerable marketing budget to push users towards Google Chrome.

In the end, Google’s ultra fast development cycle was the difference maker. 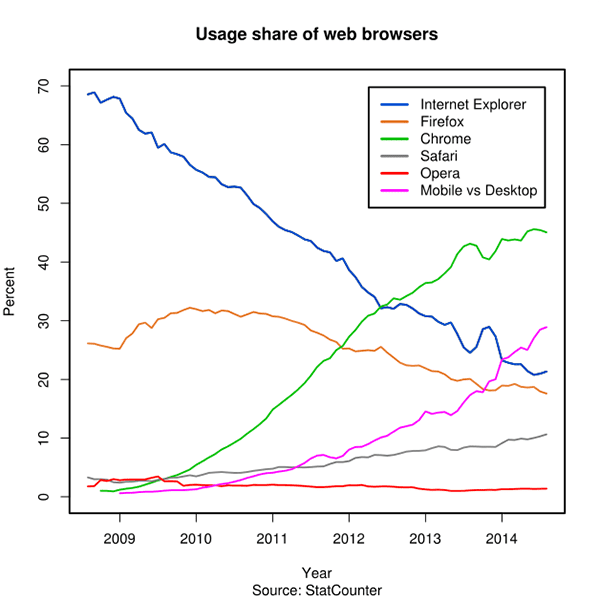 In the beginning Google focused almost exclusively on one thing: speed. They made sure that their browser was the fastest on the market and that everyone knew it too. This is what attracted their earlier adopters, many of which were actually Firefox users who felt that their browser of choice was sacrificing speed for endless features.

Secondly, they took advantage of their speedy development cycle (something the other companies could not easily transition into) to close the remaining feature gaps between them and their competitors at an unprecedented speed–especially apps and extensions, which steadily grew to match and eventually outgrow the impressive add-ons library so many Firefox users love.

From 2008 to 2014 (as pictured in the graph above) Google Chrome rocketed past all of their competitors to eventually dethrone Internet Explorer as the most used browser in the world.

Ironically, as a result of the intense competitiveness of the Second Browser War all of the top browsers now perform at roughly the same high levels across metrics of speed and security. Perhaps with a slight edge in security still going to Google Chrome. Speed differences are now mostly due to other factors than browser performance–such as internet connection and hardware.

Basic Profiles of the Current Contenders

As you have no doubt gathered from the sections above, there are currently five main contenders for the top position in the web browser market. Each establishing its current place during the Second Browser War. I’ve listed them all below in alphabetical order and described their key differentiators and platform compatibility. 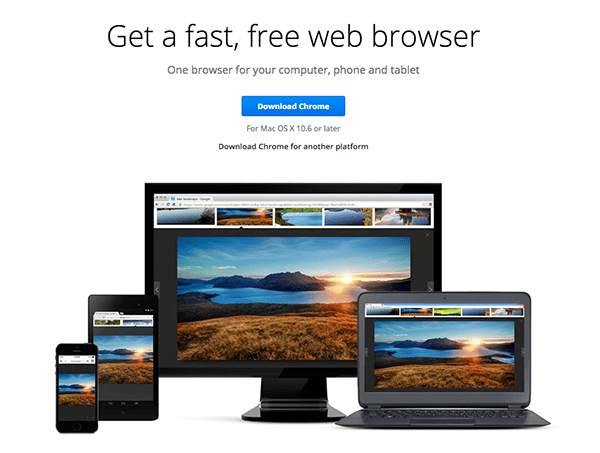 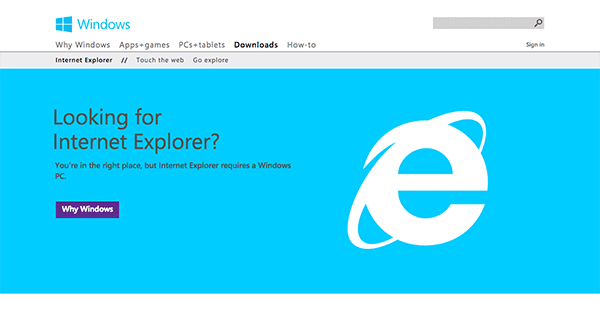 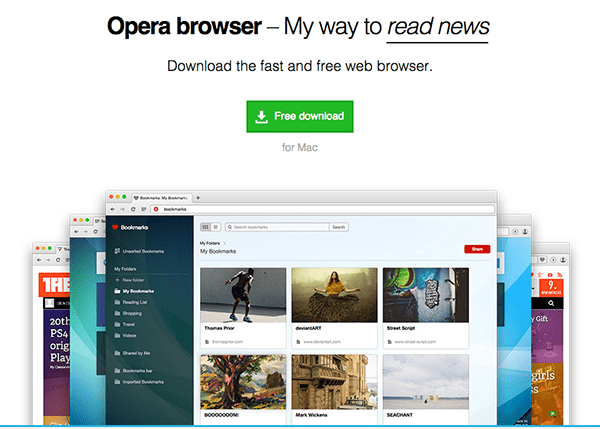 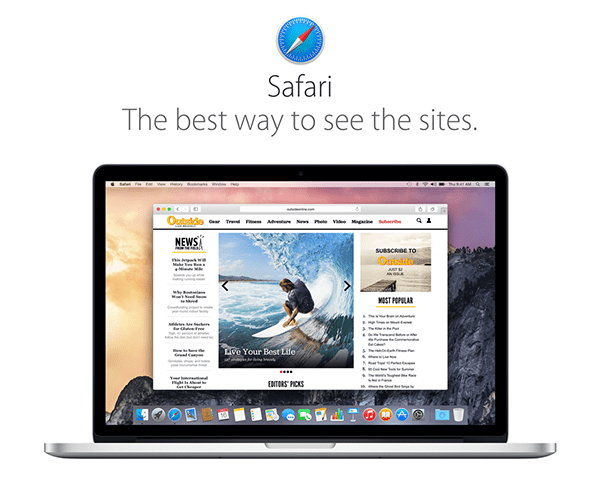 Who are the Current Winners and Losers?

As of the end of 2014 things haven’t changed much in terms of standings. However, a few interesting developments have made the future uncertain for some of these top browsers.

At the moment Google Chrome is securely in the lead. However, being at the top can lead to dangerous levels of complacency and anywhere you read about this topic you will find people railing against the unnecessary feature bloat and speed decreases in Chrome over the last year or so.

If you haven’t heard the news, Microsoft is discontinuing Internet Explorer, making it the only official loser of the second crop of browsers. You can’t fight again another day if you don’t exist!

Why are they doing this? Well, it turns out that even though the Second Browser War forced them to improve Internet Explorer exponentially–in fact, creating a browser more or less on par with all of the others–the damage that Internet Explorer 6 did to the brand has proven so toxic that a rebound in usage rates is next to impossible under the Internet Explorer flag.

Finally we have a few wildcards. Firefox, a clear contender for much of the Second Browser War, has recently had what many believe to be their most lucrative deal expire. A nearly $300MM annual deal with Google to make their search engine the default on Firefox.

They have since struck a new deal with Yahoo for an undisclosed amount. A lack of revenue may affect their ability to compete or this new deal might forge a powerful new partnership. Only time will tell.

And then there is Spartan, Microsoft’s new browser set to be released in the near future. Little to nothing is know about this browser so we’ll just have to wait and see how it stacks up against the competition.

In Conclusion (Or, Why Should WordPress Users Care?)

The average WordPress user may not care that much about the Browser Wars. We should though. The browser is literally our window into the web. It’s also how all of our clients, users, readers, etc. interact with our site and content. We should know (in a general sense at least) how our site looks and performs in each major browser.

Beyond that, I like to know which browser is best catered to my personal needs as a web professional. I literally spend my entire day, every day, working in the browser with WordPress. I like to make sure my browser choice is aligned with both my personal and professional needs. The only way I can do that is by staying abreast of the competition by learning the background and checking in every so often.

How about you? Do you keep track of the Browser Wars? If so, tell us all about it in the comments below.