How to Use Opacity, Padding, and Negative Margins to Layer Divi Modules

Blog / Divi Resources / How to Use Opacity, Padding, and Negative Margins to Layer Divi Modules

One of the most underused and underrated features of Divi is the opacity slider. You can find it in many different places in the builder, giving you minute control over exactly how all of your modules and their elements appear in relation to others near them. You can also combine Divi’s opacity features alongside transparency in images (PNGs) to give your site’s elements the illusion of being stacked on top of each other. Best of all, you can do it without having to mess with the nuts and bolts of CSS float and z-axis.

In this tutorial, I want to show you how the Divi Builder can be used to combine these elements into some pretty neat sections or module combinations you can adapt to your own website.

Here are some examples of what you’ll be able to achieve after this tutorial. The examples are laid out in sections to show how they interact with other elements and backgrounds, but not as a functional site. 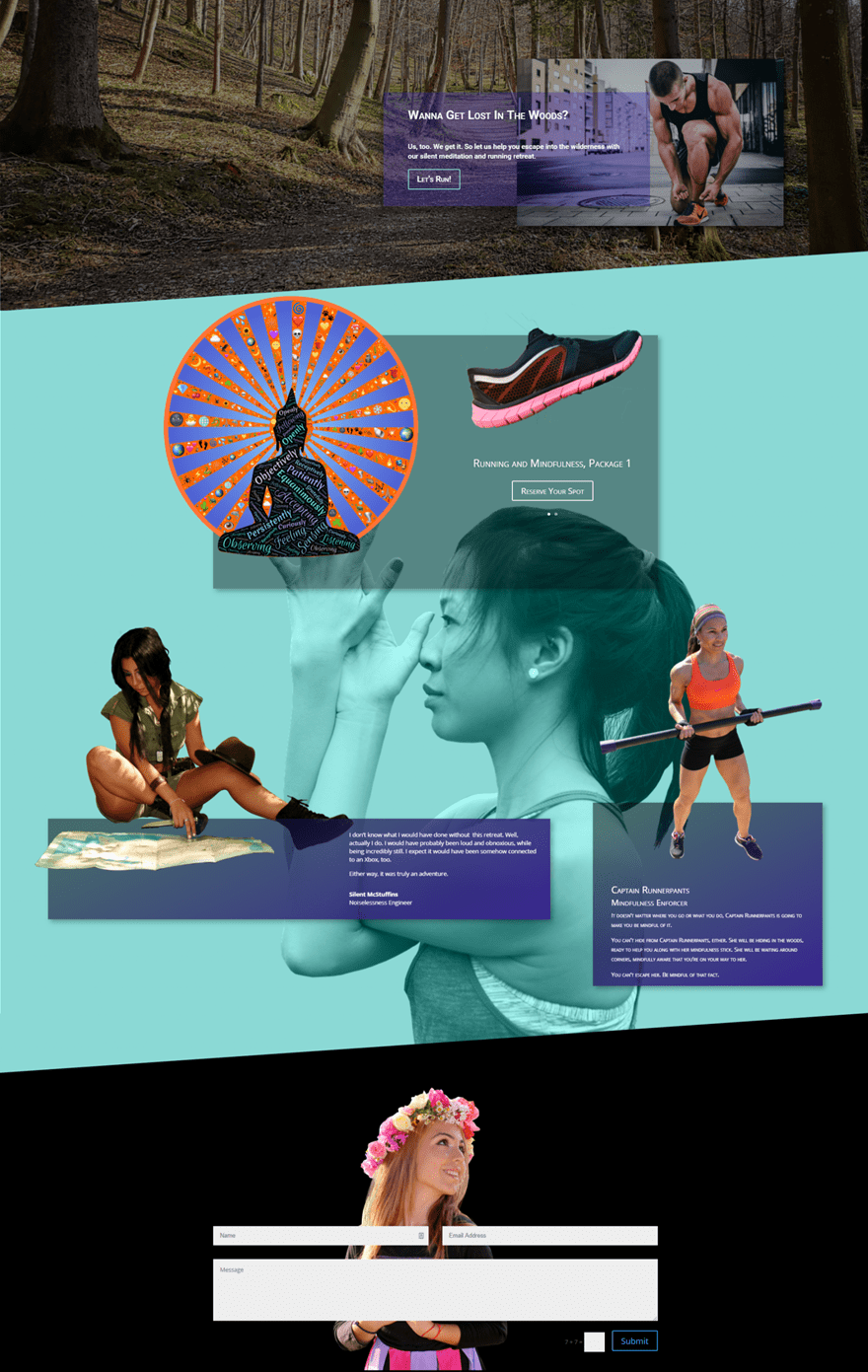 Start out by creating a new page in your WordPress dashboard and selecting the Blank Page template. You’ll need to open the Section Settings by pressing the blue gear.

You then click into the Background tab and choose the third tab for adding a background image. Upload your choice and make sure you have the Background Image Size to Cover.

After that, you’ll change Custom Padding in the Spacing section of the Design tab to

Now you can start adding in the elements for the modules that you’ll be stacking. First, add a new double-column row and go into settings. From there, set the Alignment to Right and Custom Margin to 10% under the Design tab.

Within the single-column row, add an Image module on top (A in the image above), and a Call to Action module (B) under it. Go into the Image module’s settings first and change these values in the Design tab:

The blend mode filter is incredibly important because that is how you will make sure any element under the image (the CTA module in this case) will overlay and stay on top of the image itself. This is how you’re avoiding the float and z-axis CSS. The filter helps the visibility and coloring, while the negative margins and padding affect positioning. 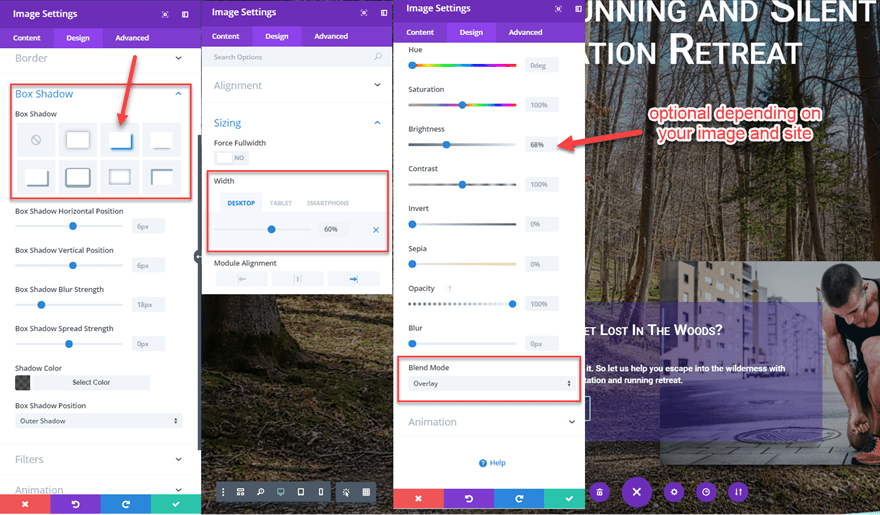 In the Text module settings, you will adjust a lot of stuff.

And finally, you will go back into your Section settings and set a bottom divider. You’ll pick the top choice from the dropdown (a slant), flip the divider upside down, and set the color to #8BD9D5 to match the upcoming section. Make sure the Divider Arrangement is set to “Underneath Section Content” so that your next section’s content appears above it, too, as you adjust their margins. Once that’s in place, you’re done with your first multi-level transparent overlay without CSS! Congrats! It should look like you’ve aligned these using different z-axis values and other positioning code.

First off, creating the middle section is exactly like the first. When you’re in the settings, though, we are playing with the background a little.

Now, you will need to add a double-column row with an image module on the left and slider on the right. When those are added, go into the Row Settings.

You have just two changes here: make the background black with a 38% opacity and add the same box shadow as before. 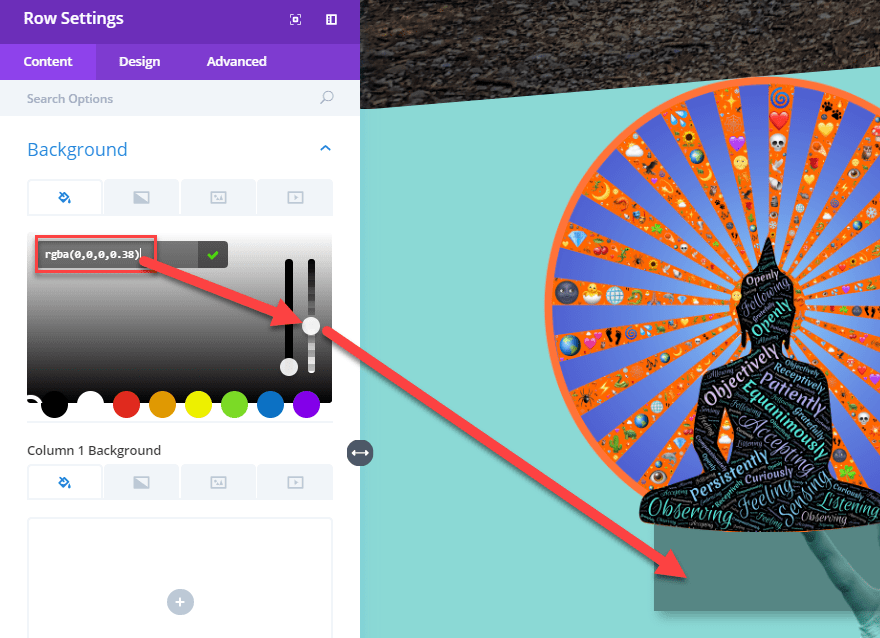 Now it’s time to set up the image that’s floating over the corner. Inside the Image module’s settings, upload your image. Again, this one works best with a transparent PNG, just for effect. We are going to overlay the image on the corner, so a shape other than a 90 degree angle will be a much better look. Once that’s done, the Design tab awaits.

Those negative margins let you get that image wherever you need it on the page, and because you set the divider to be under content, it’ll float above that, too. 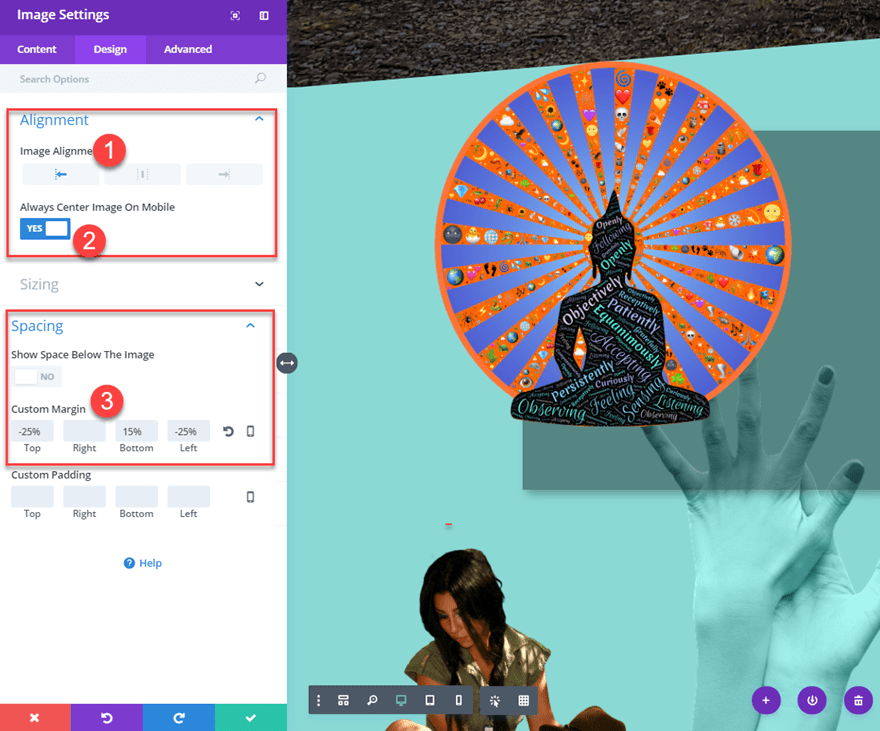 For the Slider Module, it’s a bit trickier because you have to add individual slides with their own images and such. It’s not that bad, though. The main thing you’ll want to pay attention to is whether you’re in the Slider settings or an individual Slide’s settings.

The primary element you’re worried about in the general Slider settings is the Custom Margin under the Design tab. Set it to -30%. Your slide images will always push just slightly above the row’s background this way, drawing more attention to them than sliders typically get.

The next row is pretty cool, if you ask me. We will use use a Testimonial module here, as well as text and images to achieve a couple of different overlay effects. We will add padding to extend a module beyond its bounds, while taking another image and resting it on top of the new padding, to make it look like the figure is sitting on the edge.

The only setting you really need to change for this row is under the Design tab. Make sure that the toggle for “Make This Row Fullwidth” is on. The difference this single option can make for spacing is amazing.

The two images in this row do have very similar settings. They’re pretty simple to get their overlays working, too.

The Testimonial module has a lot of moving parts, but none of them are really tricky. You just have to play with it to get everything aligned. If you want, you can do most of this with the text module, too, but I like the styling of the testimonial personally. 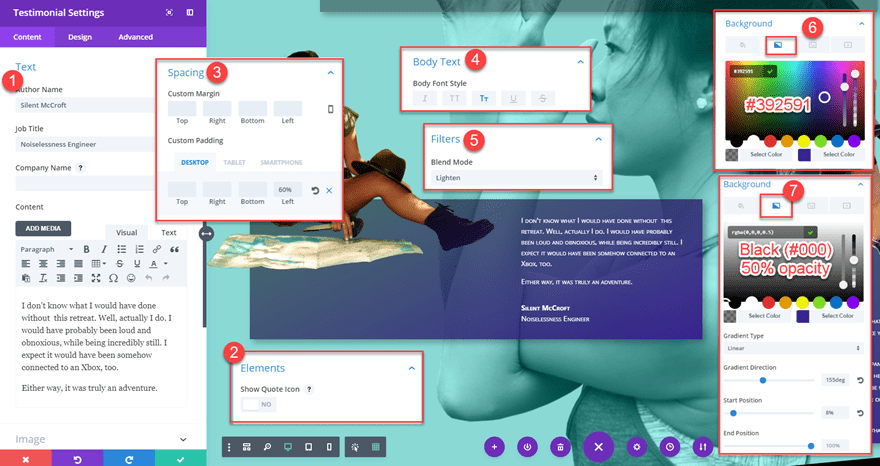 Finally, we have the text module to the right. Instead of a testimonial for your business, perhaps, I wanted to use this as either a featured-event section or even a team member bio. Styling it is very similar to the testimonial. It uses the same gradient background colors, so you can just copy/paste those into the module settings. You are almost done!

Finally, you will add a bottom divider to the section itself. This time, I went with a solid black slant and a solid black section background as a contrast to the softer feeling of the top two sections.

The third and final section I wanted to layer using built-in transparencies. I’ve always loved backgrounds that kind of merge with the elements stacked with them, so I took an image with a transparent background of a woman and wanted to overlay the Divi contact form over it.

Literally, the only change we make to the section settings is giving it a black background. So do that first. Then you need a single-column row, and you don’t even have to touch the settings. You’re welcome. All you have to do now is add an Image module and a Contact Form module. When you’ve got that done, open up the Image settings. You will just be changing a single option here: the bottom margin.

That’s it. It doesn’t even take a lot of tweaking to get them to line up. The Lady of the Contact Form is easy to get set up. And as for the Contact Form settings? You don’t have to do a thing. This example is solely using the default styling. Since it’s transparent when it’s added to the layout, the PNG background blends right in.

However, if you do want to a very subtle visual shift to the contact form, go into the Design tab and change the Blend Mode Filter to “Screen.” Doing so will make the fields on the firm ever so slightly translucent, so you see a faint ghost of the image behind it. These are the kinds of effects that make site visitors smile. It’s not quite a microinteraction, but it has that same kind of effect. 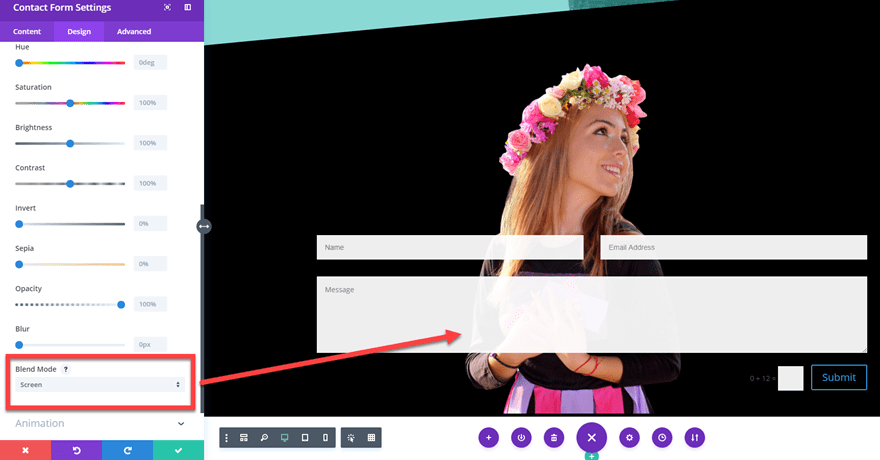 That’s It and That’s All!

Hopefully, y’all thought that was as fun as I did. Being able to do cool stuff like overlays and multi-layered designs without CSS is super cool. So if you’re ever looking for a way to spice up your designs, think about making stuff see-through. Yank around the images and elements with negative margins, and you’ll be well on your way to taking your designs to a whole new level.

What are some design tricks you’ve used to make elements interact in new and interesting ways? 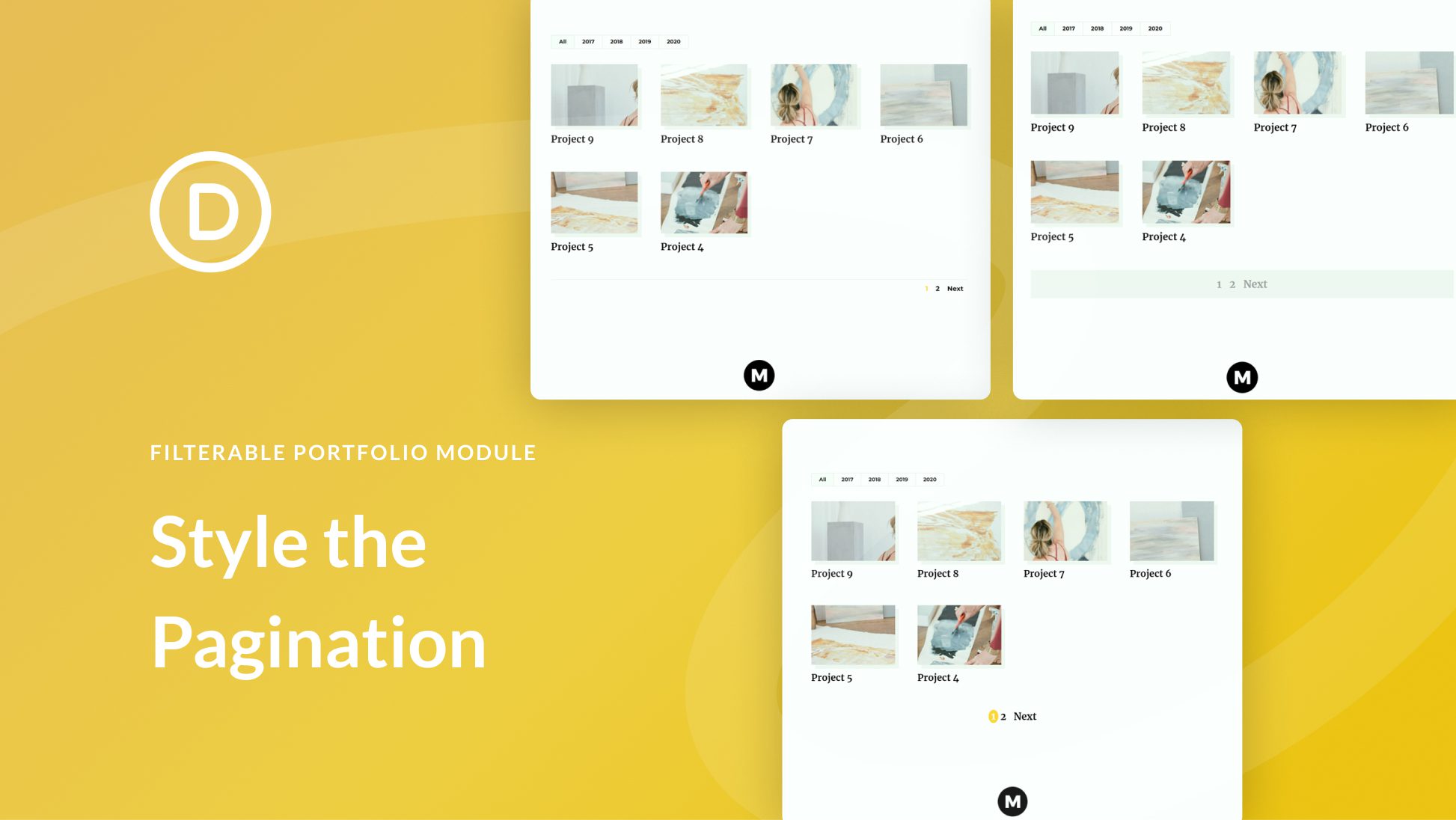 How to Style the Pagination in Divi’s Filterable Portfolio Module

Building a hero section is an excellent way to call attention to important content on your page. It’s a super-sized piece of content that you can use to tell your story, share information about your work, or highlight a product or service. With Divi’s Fullwidth Header module, you can add a... 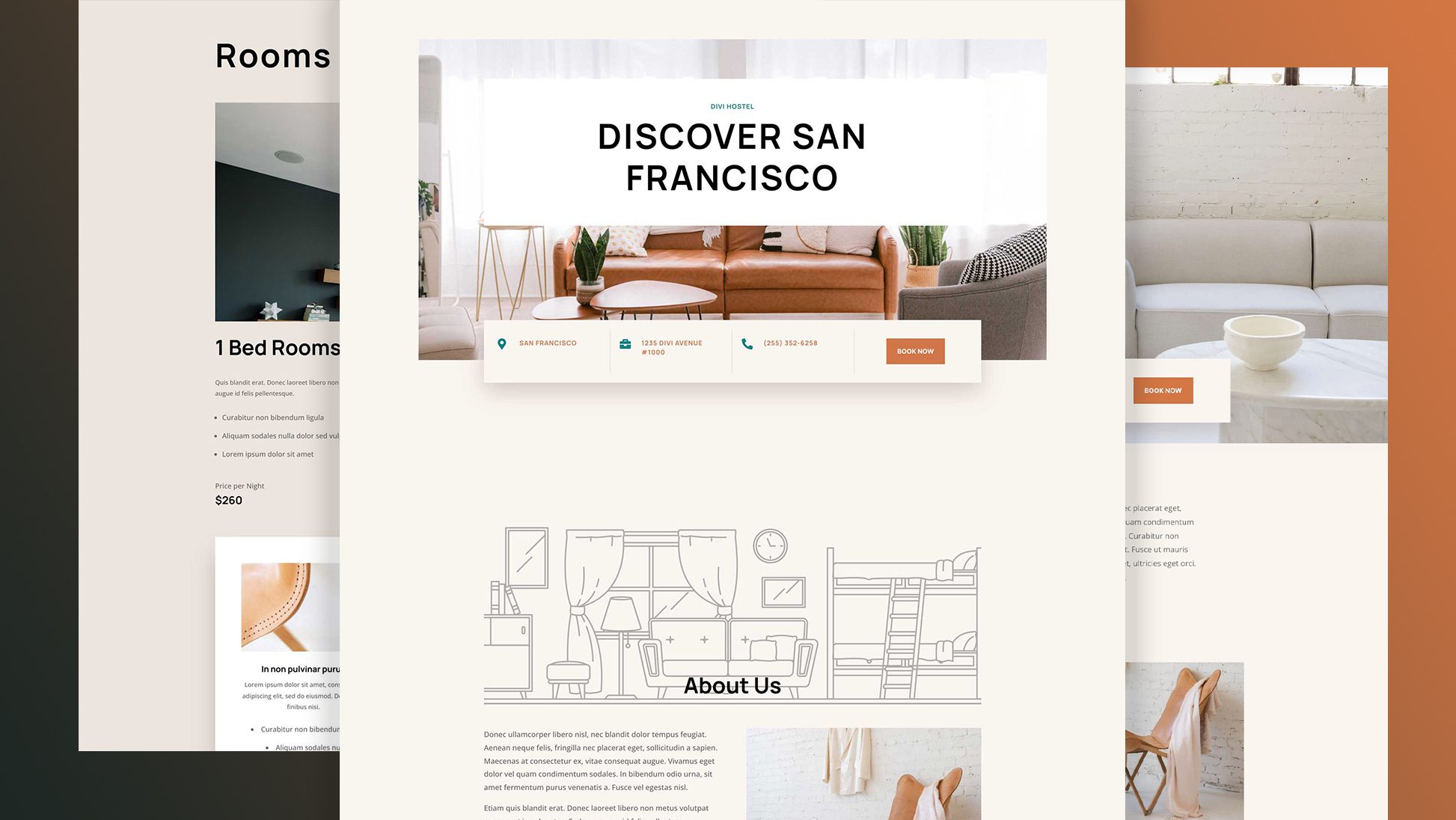 Get a Free Hostel Layout Pack for Divi

Hey Divi Nation! Thanks for joining us for the next installment of our weekly Divi Design Initiative; where each week, we give away a brand new, free Divi Layout Pack from our design team to you. This time around, the design team has created a beautiful Hostel Layout Pack that’ll help you get...