Find It In The Divi Marketplace

Image Intense is available in the Divi Marketplace! That means it has passed our review and has been found to meet our quality standards. You can visit Superfly in the marketplace to see all of their available products. Products purchased from the Divi Marketplace come with unlimited website usage and a 30 day money back guarantee (just like Divi).

Purchase In The Divi Marketplace

Image Intense is a third party premium plugin by the folks over at Superfly that adds a new module to the Divi Builder for both Divi and Extra. The new module combines features from three Divi modules (image, text, and button modules) and then adds new features to add overlay and hover effects to images. Features include 22 image hover transitions, buttons, opacity settings, mix blend modes, text links, and lots more.

Image Intense is a great way to add micro-interactions that give your readers feedback and call attention to your call-to-action (CTA). Animations include zooming the image in or out, stretching the image, compressing the image, adding an overlay, swiping across, revealing text, etc.

In this plugin highlight we’ll take a look at what the plugin can do. Images are taken from Unsplash.com. 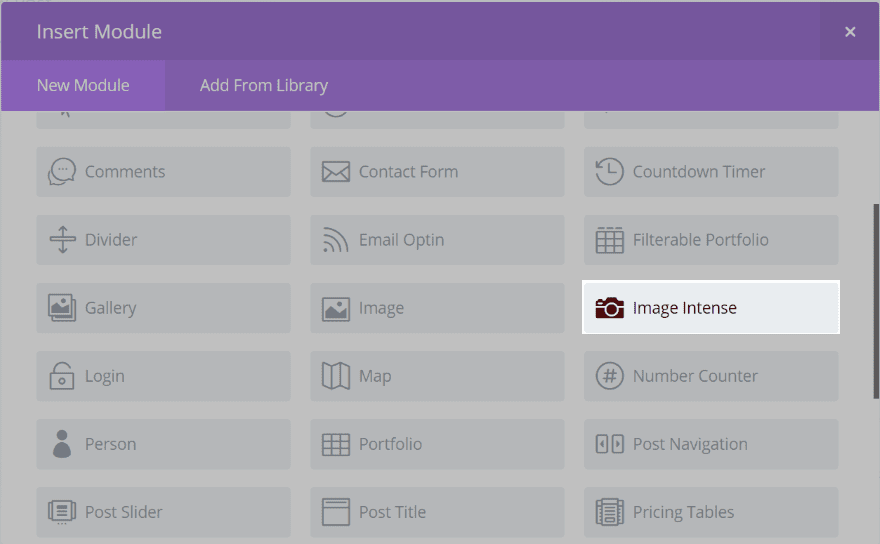 The plugin adds a module to the Divi Builder. To install the module simply upload and activate the plugin. Use the Divi Builder as normal and place the Image Intense module within your layout. It can be used in place of an image module. 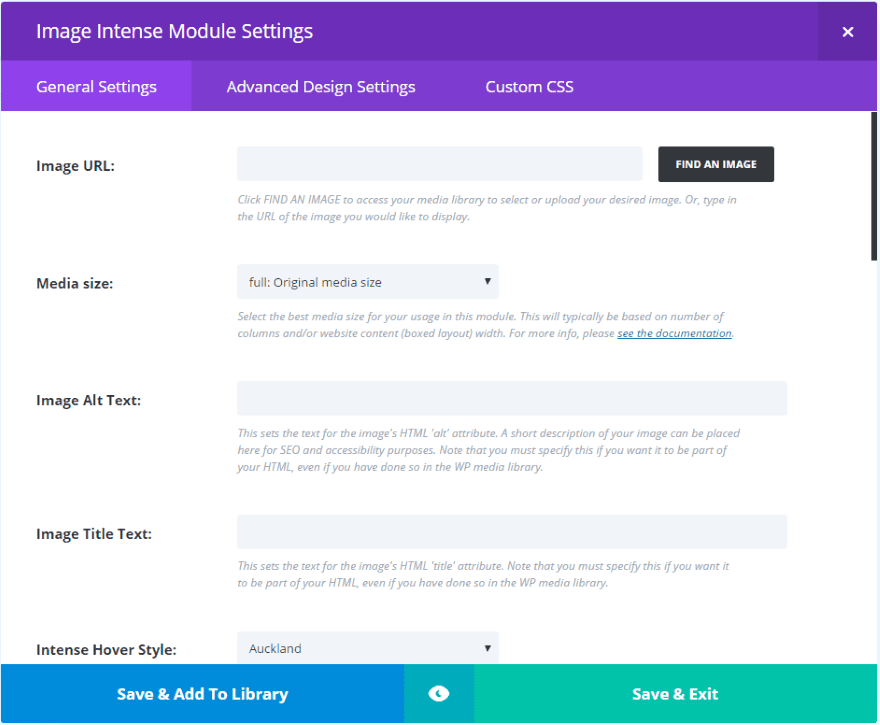 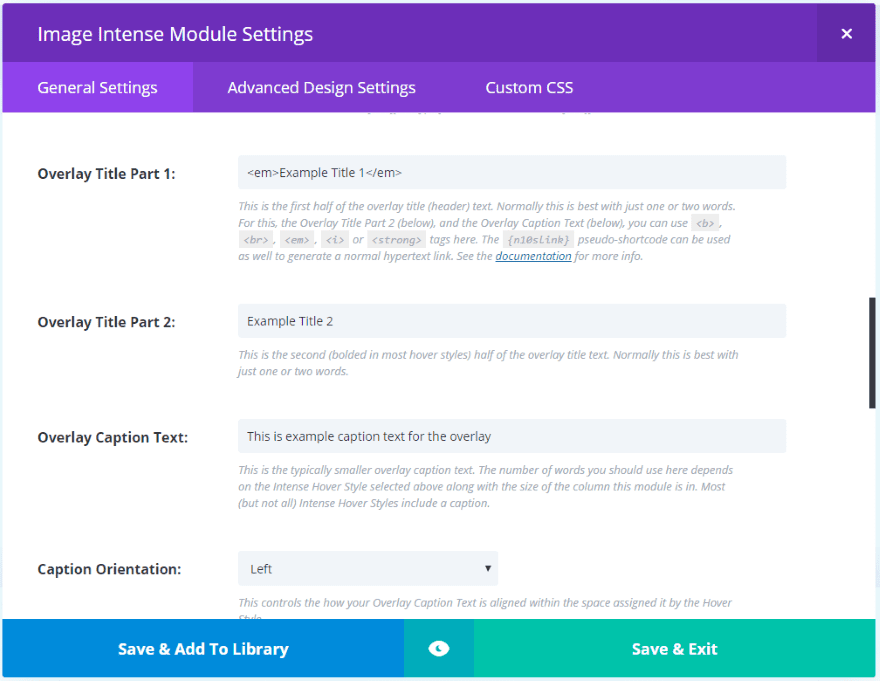 The overlay titles can use markup. Here you can add links, bold the text, etc. 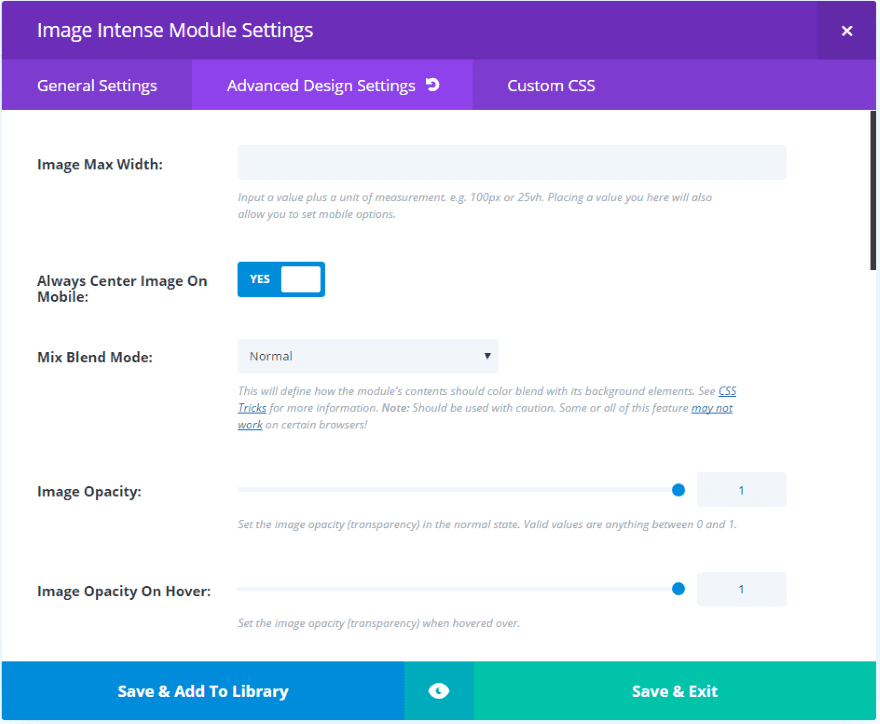 To see what it can do I created several layouts and added several Image Intense modules. Here’s a look at some of the animations and features.

In this example you can see the cropped size of the images with two overlay titles. The image on the left uses the 400 x 516 cropped setting for the media size and Auckland for the animation.

The image zooms out slightly and shows an overlay with a message. The font color and size can be adjusted if needed.

The image on the right is zoomed in and includes the message in an overlay. This one is more obvious of the difference. It uses the Jerusalem hover style.

The image in the center uses the Douala hover style.

You can see in this image the frame moved to the bottom of the image and now displays the message.

The image in the center uses the Madison overlay style.

You can see here how it places an overlay over the image that reduces the opacity while keeping the focus on the circled area that includes the message. 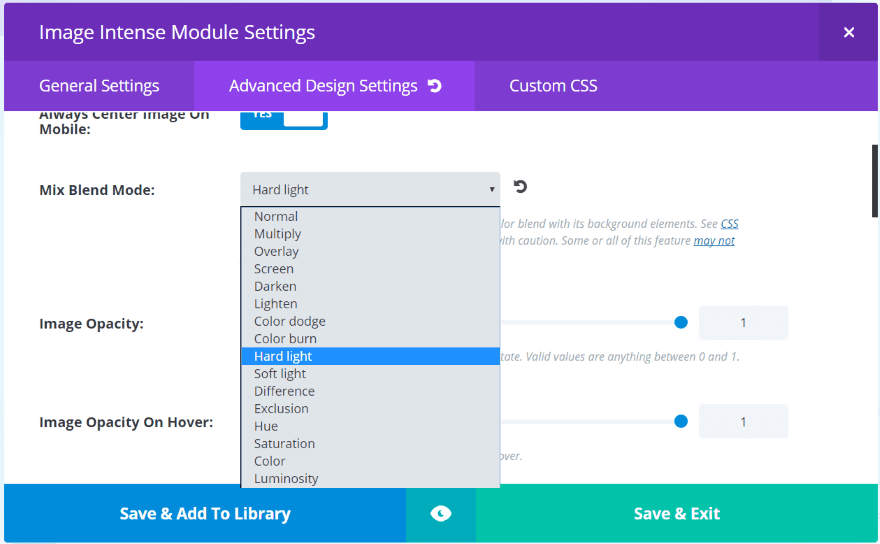 Mix Blend Mode is an easy way to apply CSS attributes to the image. It blends the module’s color with its background. It can create some wild effects and some settings work better with certain colors, so this will require some experimenting. Some of the features might not work with all browsers, so you’ll want to use this feature with caution.

The image in the center is using the Mixed Blend Mode called Hard Light.

This one uses Luminosity. I’ve also added a button at the bottom center and setup custom styling. 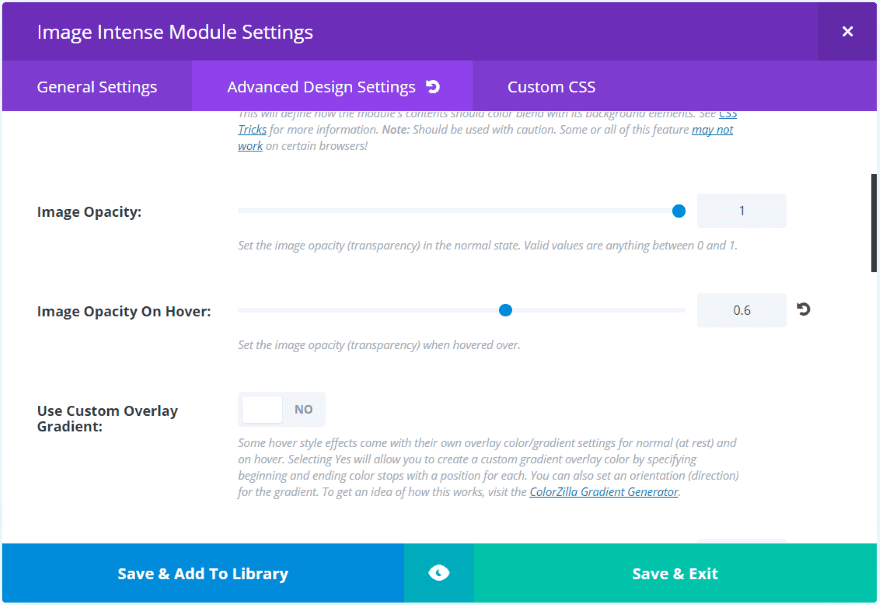 Opacity is how transparent an image is. The more opaque an image is the less transparency it has. The opacity is also effected by the animation style and the mix blend mode that you choose. You can use them in various combinations to see what types of effects you can create. You can apply different opacity levels to the normal image and the hover image.

This is the normal image with no opacity. I’m using the full original size for the media size setting.

Here the image on hover. I’ve set the opacity rating to 0.6. This one uses the Cali hover style.

This one uses a large image of 1024×1024 with no cropping and an image opacity of 0.4. Both of the overlay titles use HTML tags. I’m using tags for strong, emphasis, and break. It’s using the Portland hover style.

I’ve set the hover opacity to 1 so the image is fully revealed on hover. 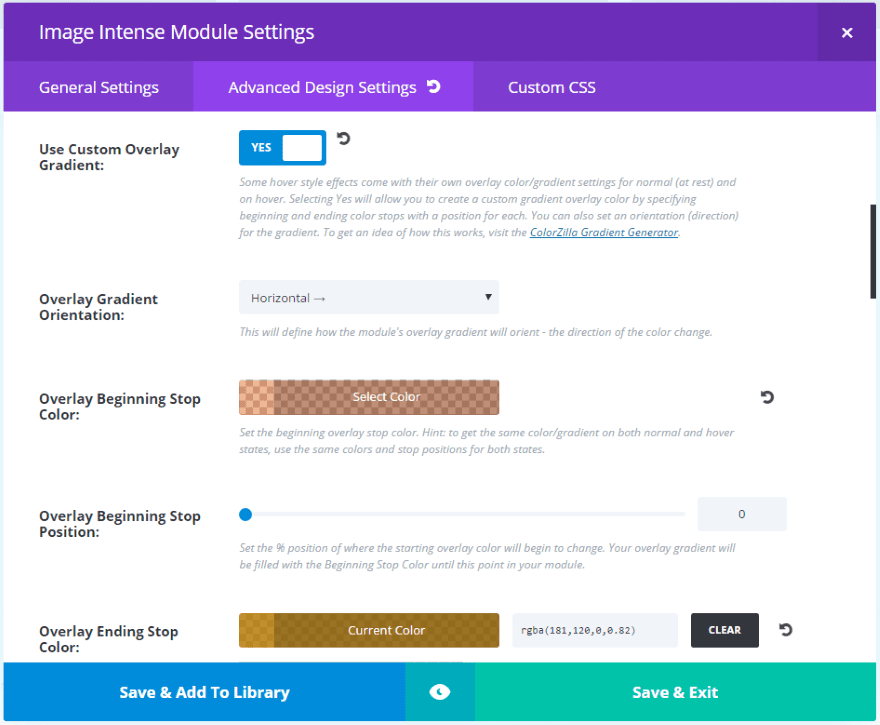 In the Advanced Design Settings I’ve selected Use Custom Overlay Gradient. This opens a new set of options where I can select the starting and ending gradient color, the gradient orientation, and the beginning and ending stop position for both the regular image and the hover image.

Here’s a look at the gradient using the Madison overlay style.

The image on the left displays an overlay before hover.

On hover the overlay is removed to reveal the image. This one’s using the Hanoi hover style. 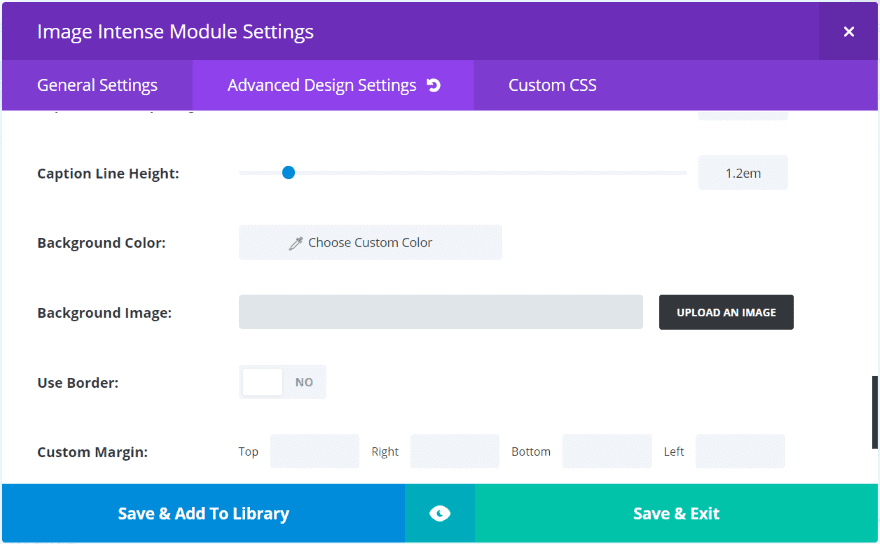 In this example I wanted to swap one image for another. This is done by adding an image as the module’s background image in the Advanced Design Settings. 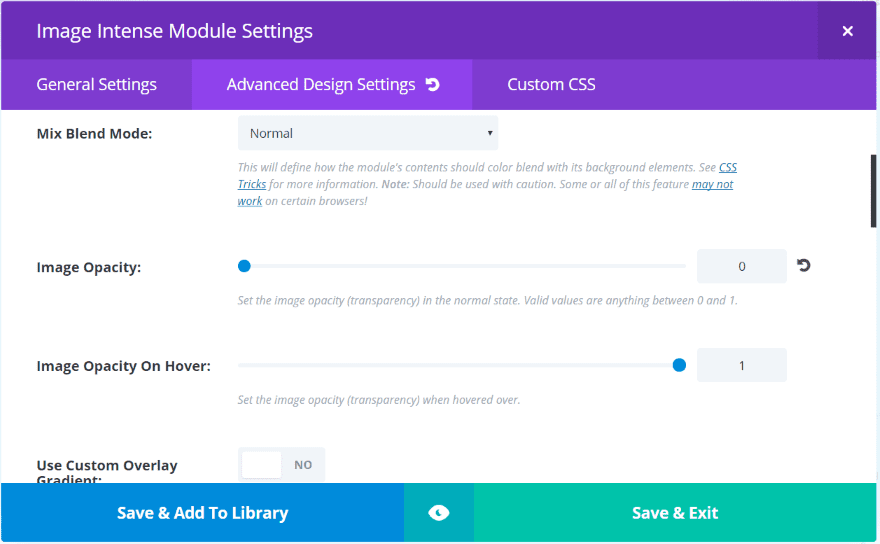 I’ve chosen this image as the background image and I set the module’s image to have an opacity of 0.

On hover, the humming bird changes to an eagle and displays a message. This one is using the Kiev hover style. 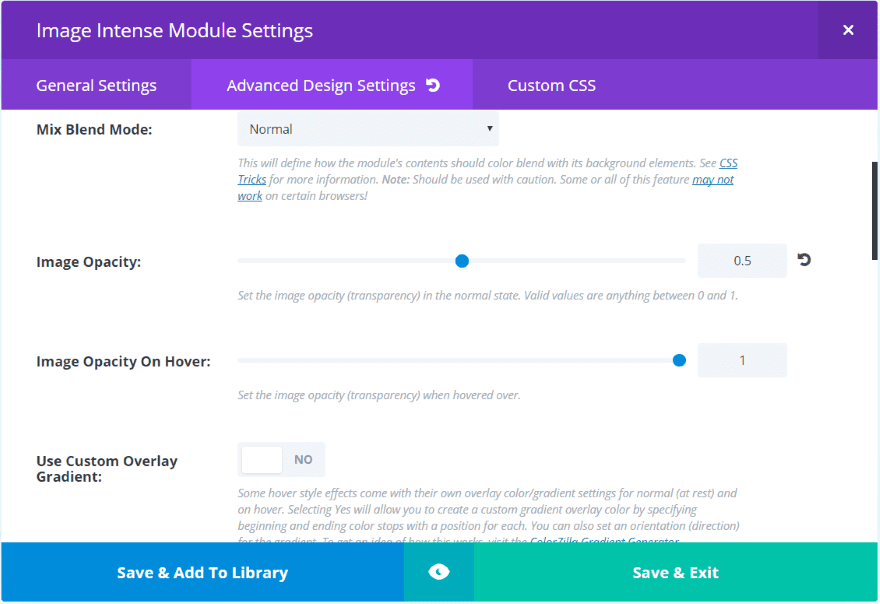 You can also blend the two images by adjusting the opacity so the background image shows through the foreground image. This can create some interesting effects and messages.

Here’s the image on hover. The opacities can also be tweaked to show both but one can be more prominent. 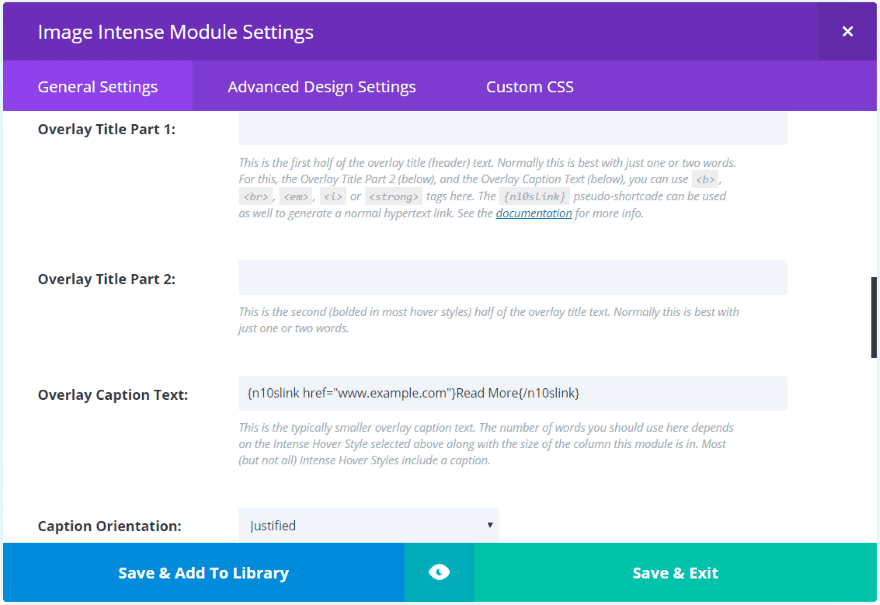 Links can be added to the caption text. This is done by placing a pseudo shortcode with the text followed by the URL. The shortcode is provided in the field description so you can copy and paste. It will use href, target, and class attributes.

This one adds a caption with a link which can take readers to a page or post for more information.

This is great for creating CTA’s, linking to posts or pages, etc., to lead readers to your content. The images themselves can also be made clickable. This might lead them to a portfolio or an about or contact page. 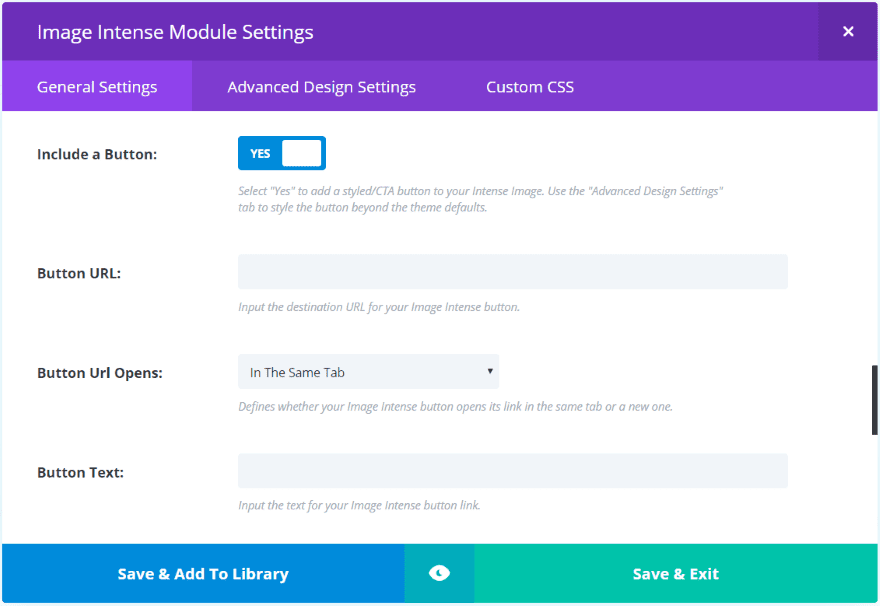 You can add a button to the image to create a call to action.

The image on the left uses a radial gradient with markup for the text. The image on the right displays the button with a hover effect. Both images use black borders. I’ve added an overlay for the button’s background and set the border radius to 15. This example uses the Rochester hover style.

The image on the left uses a vertical gradient between two shades of black: the first with 65% opacity and the second with 19% opacity (19%! I know… you’re welcome!).

Overlays, buttons, and gradients are great for creating CTA’s. 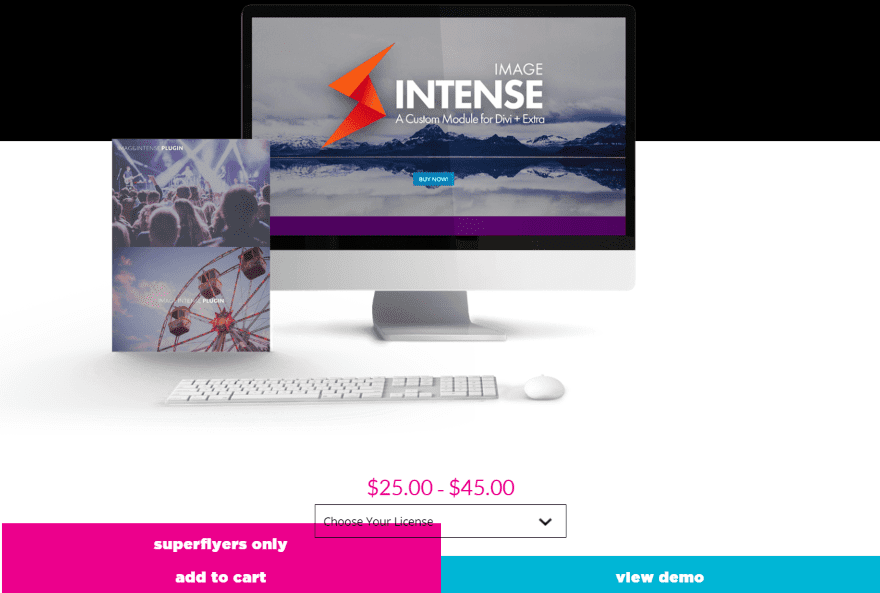 This is a premium plugin. It’s $25 for a single site plus a dev site which allows you to use it on a dev site at the same time that you’re using it on your live site. It’s $45 for unlimited sites.

Documentation is provided on the website and includes examples and a demo area where you can see the effects live. Support is provided by a support ticket system.

Image Intense is an excellent module for adding images with hover transitions. Overlays can include gradients, text, links, various levels of opacity, and even swap from one image to another. Text, buttons, links, etc., have multiple position options and there are lots of transition options to choose from. You can do even more by adding your own CSS.

I found the module intuitive to use. If you can use a Divi module then you’ll feel right at home with this one. All of the styling features are here. Hover overlay transitions are a great way to add some pizazz to your Divi website. If you’re interested in adding hover transitions to your images then I think you’ll find Image Intense is worth a look.

We want to hear from you! Have you used Image Intense? Let us know about your experience in the comments below!

Diviflash plugin is the entire solution packed with exclusive & ... 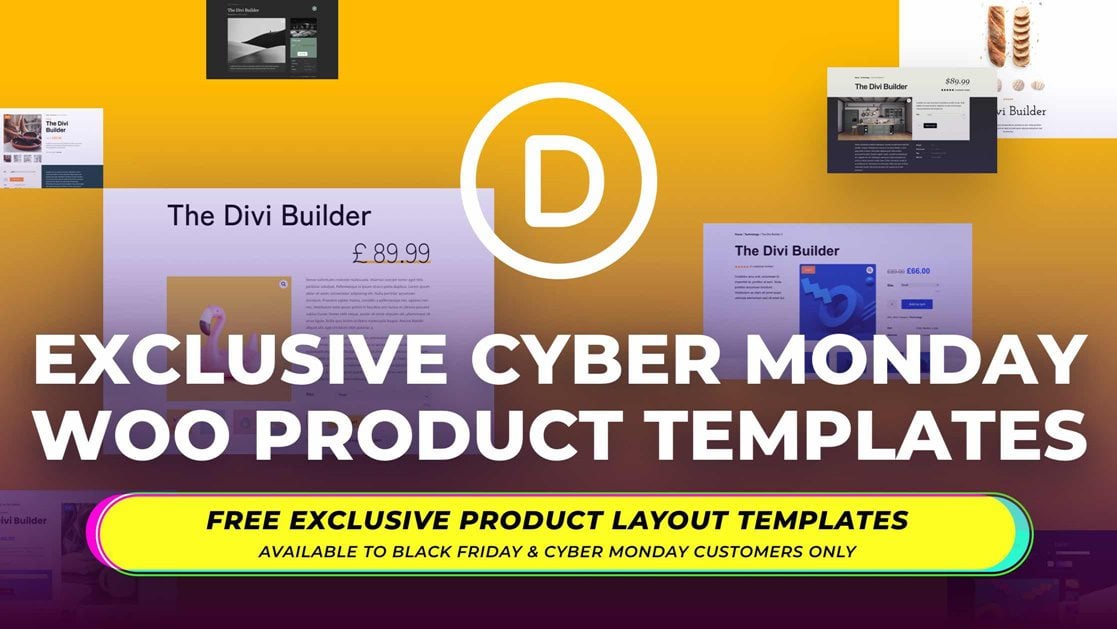 Posted on December 3, 2021 by Jason Champagne in Divi Resources 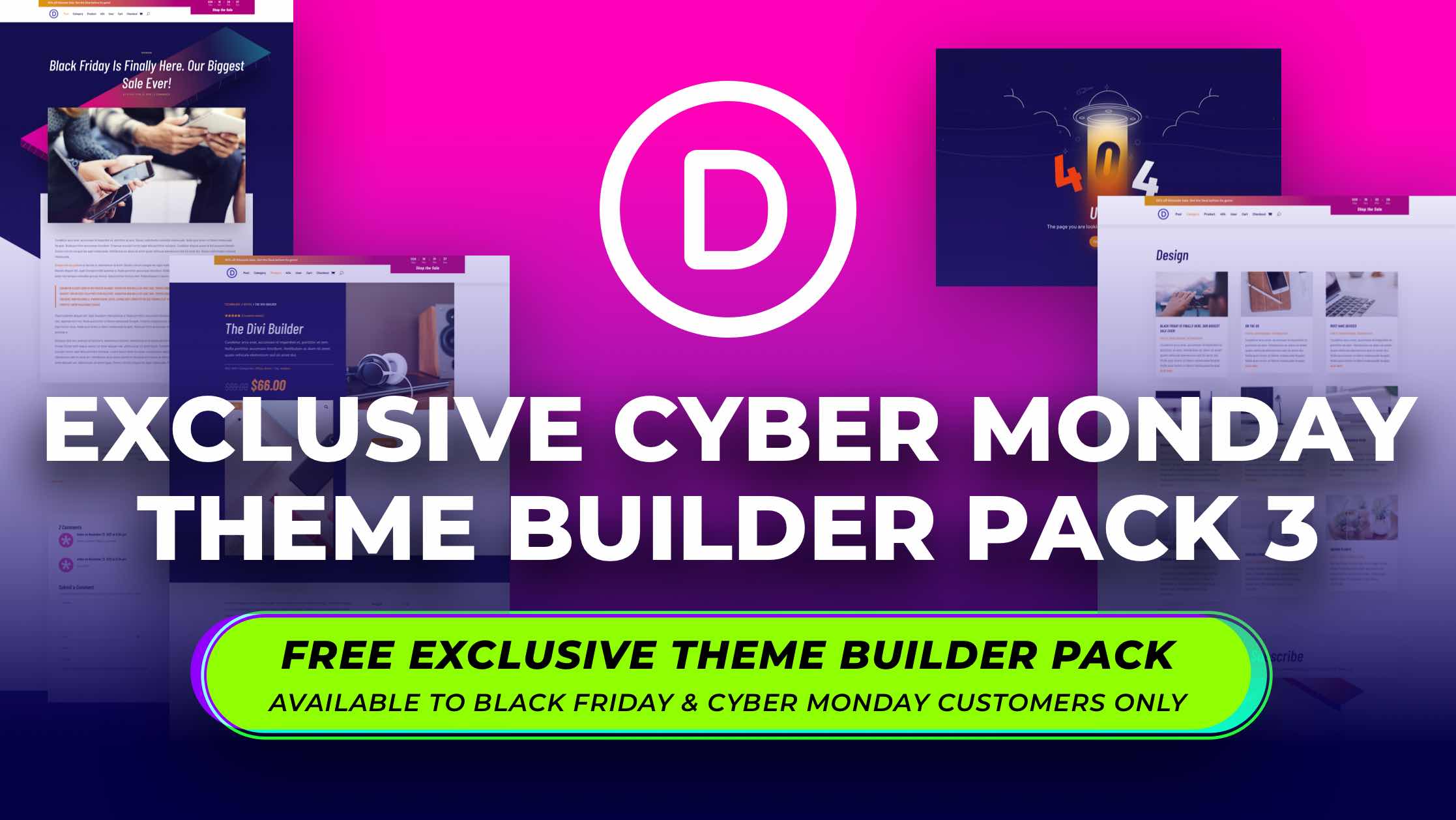 Posted on December 2, 2021 by Jason Champagne in Divi Resources