Welcome to Day 81 of our Divi 100 Marathon. Keep tuning in for 100 days in a row of awesome Divi resources as we count down to the amazing release of Divi 3.0 on the final day of the series!

We had a slight change of plans today. We were supposed to have Josh Ronk on the show. He’s a developer here at Elegant Themes and he’s been leading the Divi 3.0 project. However, in order to get the beta released we had to delay doing his interview this week and save that for another time.

We all figured that you would rather have the new Divi 3.0 beta than an interview. The good news is you’re going to get both—just a little spaced out. So what’s today’s show about? Keep reading!

In today’s Divi Nation episode I thought I’d take the opportunity to simply speak directly to the community and update you on what’s going on behind the scenes here and what’s coming up in the near future. That means Divi 3.0 beta, Divi t-shirts, and Divi meetups all get an update.

First up, the Divi 3.0 beta has been released. If you are in the beta program then by this morning you have been notified. If you did not get an email about the beta then I’m sorry to say you will not be testing the beta this time around.

We let in as many new people as possible this time around but we had to cap it somewhere. Hopefully next time around those of you who didn’t get in but still want to will be able to join the program for our next release.

For everyone who did get into the beta program for Divi 3.0, we appreciate your time and effort and we look forward to hearing from you.

I’d like to address a question we’ve been getting a lot lately.

The question is: If I am an existing Elegant Themes member will I have to pay more for Divi 3.0?

The answer is a resounding NO.

Any Elegant Themes member who’s account is in good standing will get access to Divi 3.0 as part their membership. No extra fees whatsoever.

The only people who will have to pay for Divi 3.0 are brand new Elegant Themes members.

The New Powered By Divi T-Shirts Are In! 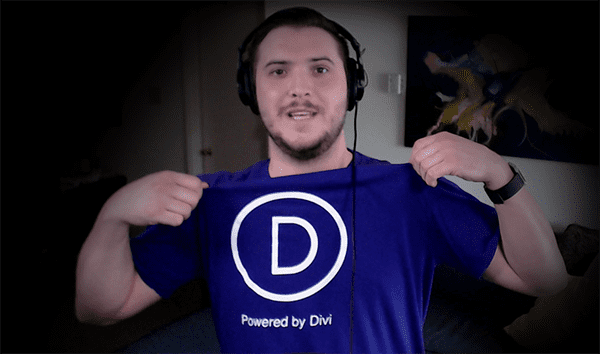 The new “Powered by Divi” T-Shirts

For anyone interested in getting one of their own, they are only available as free gifts to anyone who joins us at an official Divi Nation Meetup. So if you’d like one of these shirts, head on over to our meetup.com page at meetup.com/divination.

Join Us for Upcoming Divi Nation Meetups at Meetup.com/DiviNation 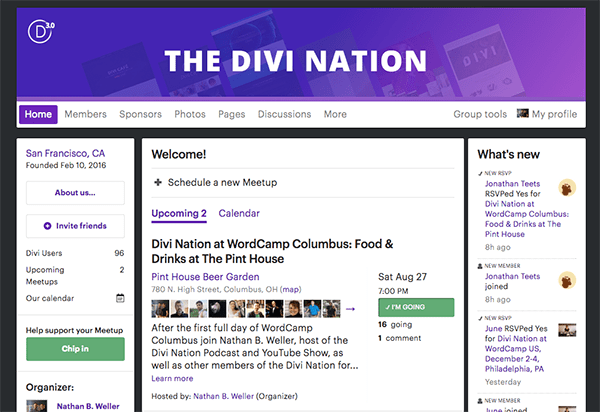 When you get there, you’ll notice two events. The first one is coinciding with WordCamp Columbus. Next Saturday evening, August 27th, myself and (as of right now) sixteen other Divi Nation members are going to be meeting at the Pint House Beer Garden for food, drinks, and some good conversation.

If you’re in the central Ohio area I hope you can make it. I’ll be bringing free “powered by Divi” t-shirts for everyone who RSVP’s.

The next event you’ll notice on our meetup page is for WordCamp US in Philadelphia, Pennsylvania December 2-4. I’m excited to say that as of right now we have 34 people planning to attend that event!

We have three more months to push that number even higher. I don’t know about you but I would love to see us hit 100. Can you imagine a huge block of 100 people in their powered by Divi t-shirts all hanging out together for the weekend at one of the biggest WordPress events in the world?

I think it would be amazing and I really hope we can get there. If you’d like to be a part of that please be sure to RSVP on our page, which, again, is meetup.com/divination.

If you can’t make it out but want to support the Divi Community in general, please help us promote that event to anyone you know who uses Divi and would be interested.

Next Week on the Divi Nation Podcast: Mak Shows You How to Make Page Elements Sticky!

We’ve got a great tutorial in store for you all next week on the podcast. Using a free javascript library and some css Mak is going to show you how you can make any page element–be it a module, row, or section–“stick” to the top of the page as you scroll down. This is great for grabbing and directing your site visitor’s attention towards specific calls to action as they scroll down a page.

Be sure to subscribe to our email newsletter and YouTube channel so that you never miss a big announcement, useful tip, or Divi freebie!

The Countdown To Divi 3.0

This post is part of our Divi 100 marathon. Follow along as we post free Divi resources for 100 days in a row! This 100-day countdown will end with the game-changing release of Divi 3.0, including our brand new visual editor built from the ground up using React. Divi 3.0 will change the way you build websites with the Divi Builder forever!
Let the countdown begin.

The Divi/Gutenberg/Woo Cross-Domain Content Copy Paste System (CCPS) plugin allows you to easily copy and paste Divi, Gutenberg, and WooCommerce layouts across websites on different domains. This could be convenient for building a layout on one site and moving it to a different site without having...