How to Create Moving Image Shadows on Scroll in Divi

Posted on August 4, 2020 by Jason Champagne in Divi Resources | 10 comments 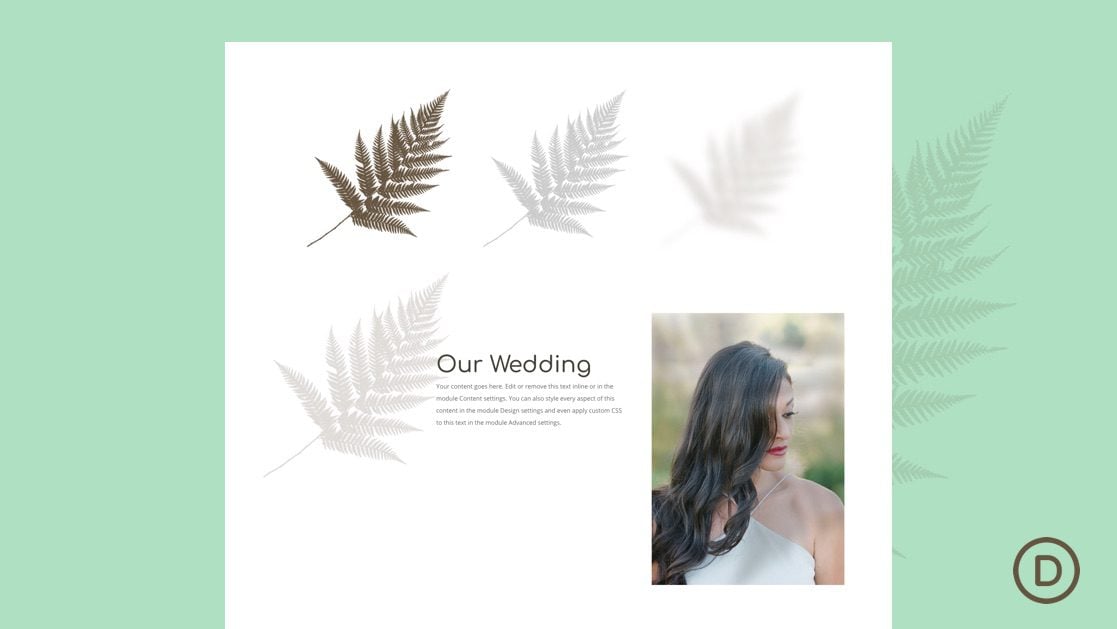 In the world of web design, we usually think of shadows as something we can add in Photoshop or as a CSS property (like box-shadow or text-shadow). But with Divi, we can think outside the box (or box-shadow). With just a few adjustments to Divi’s built-in filter and scroll effect options, we can transform any image into a lifelike shadow.

In this tutorial, we are going to show you how to create moving image shadows on scroll in Divi. The trick is to find a PNG image with a unique shape so that, once the image is transformed, it will keep the shape and look like a realistic shadow of the image. After the image/shadow is ready, we can add a few scroll effects to move the shadow as the user scrolls. This unusual (yet familiar) effect will add a stunning design element that will bring new life to your site.

Here is a quick look at the design we’ll build in this tutorial.

In the portability popup, select the import tab and choose the download file from your computer. 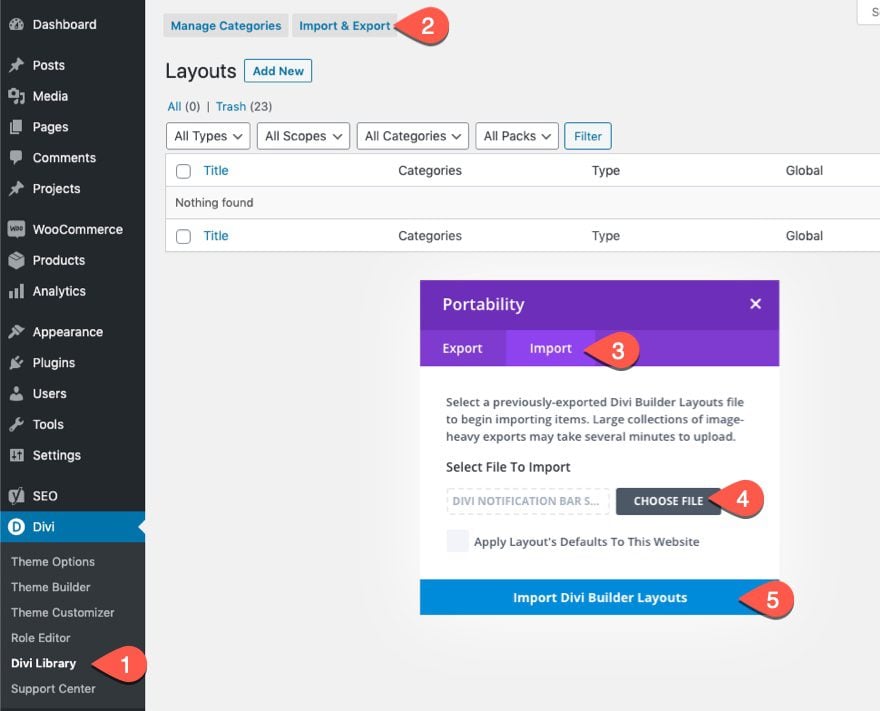 Once done, the section layout will be available in the Divi Builder. 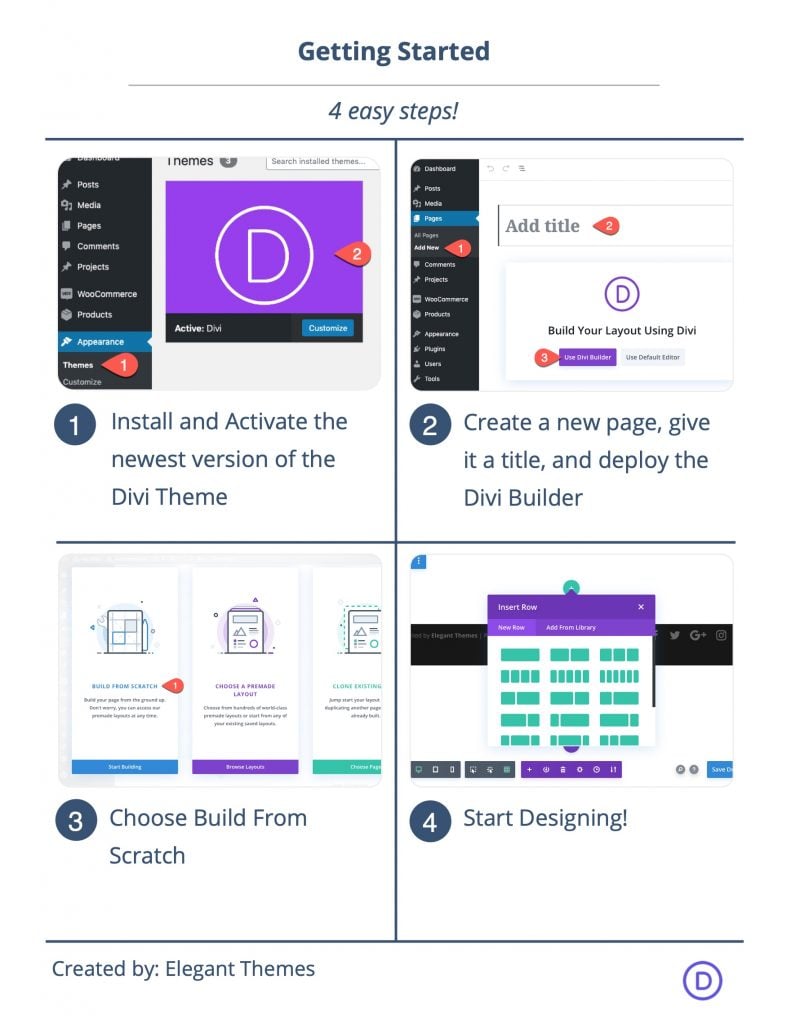 After that, you will have a blank canvas to start designing in Divi,

In this first part, we are going to design a quick section layout to complement the moving image shadow scroll effect.

To get started, add a two-column row to the regular section. 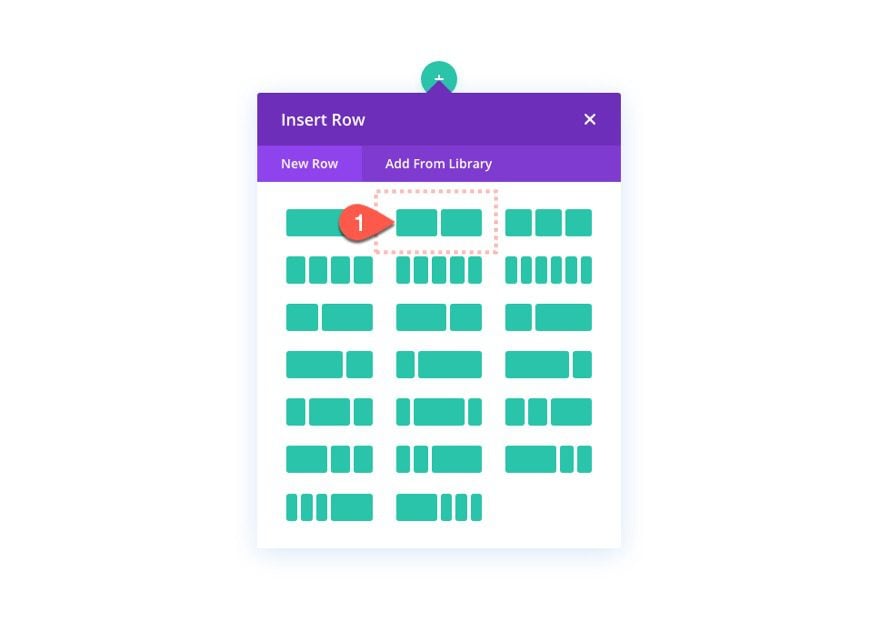 In the left column, add a new text module. This will serve as our mock text content.

Then paste the following HTML inside the body content: 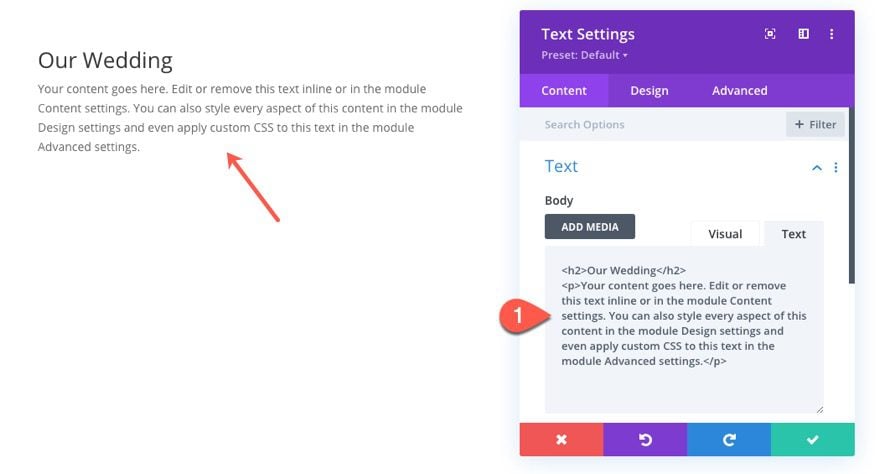 Under the design tab, update the settings as follows: 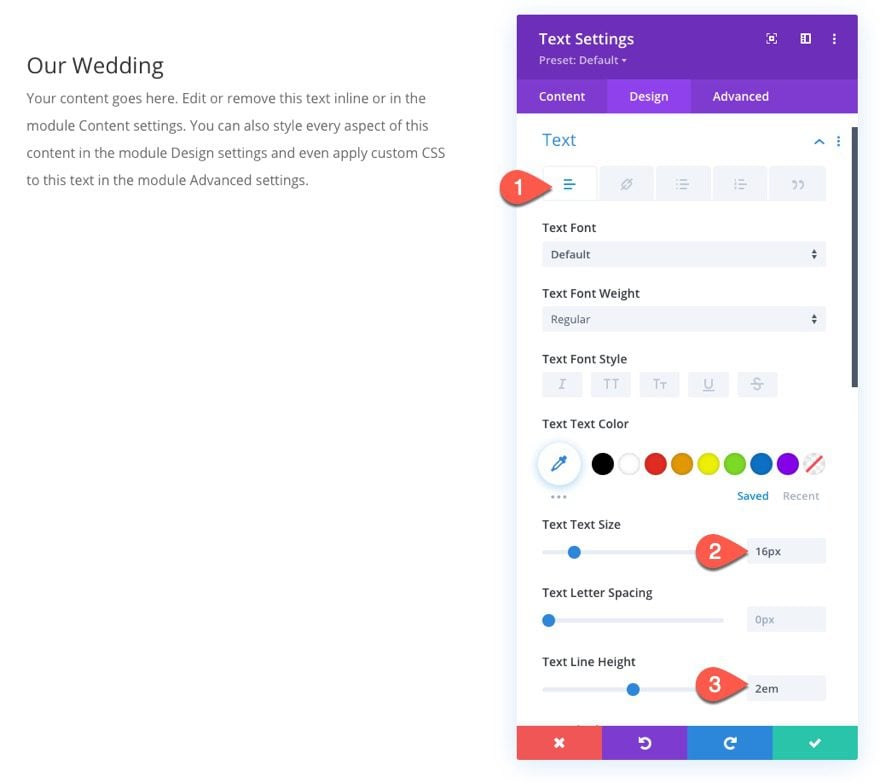 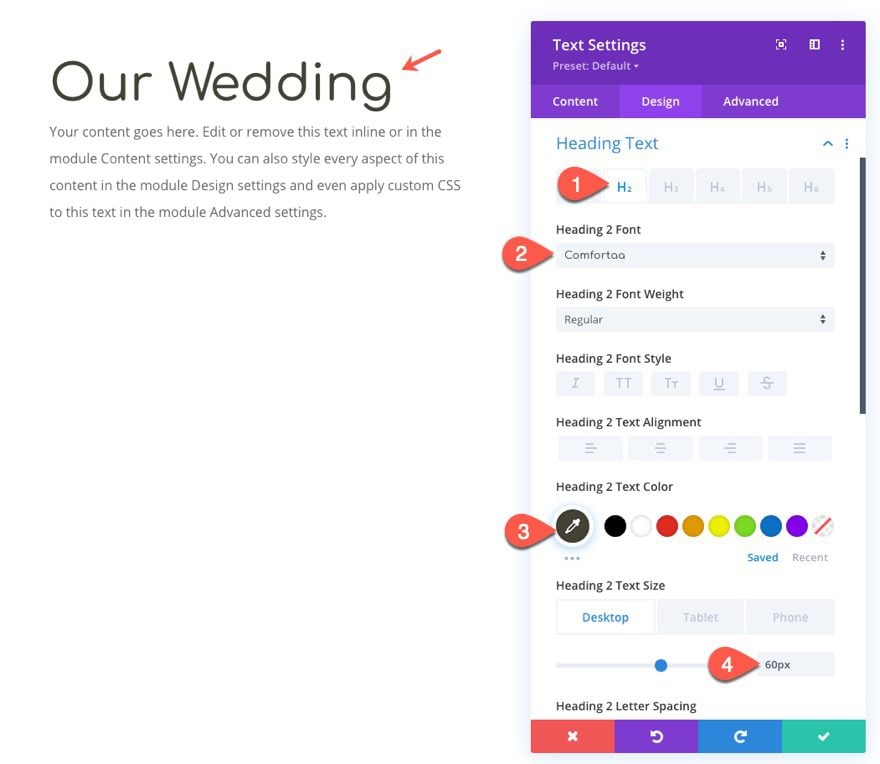 Under the text module, we are going to add an image that will serve as a design accent to the text. We are going to use the image of a tree branch from the Holistic Healer Layout Pack. This will be the same image we will use later for our moving image shadows.

Add a new image module under the text module. 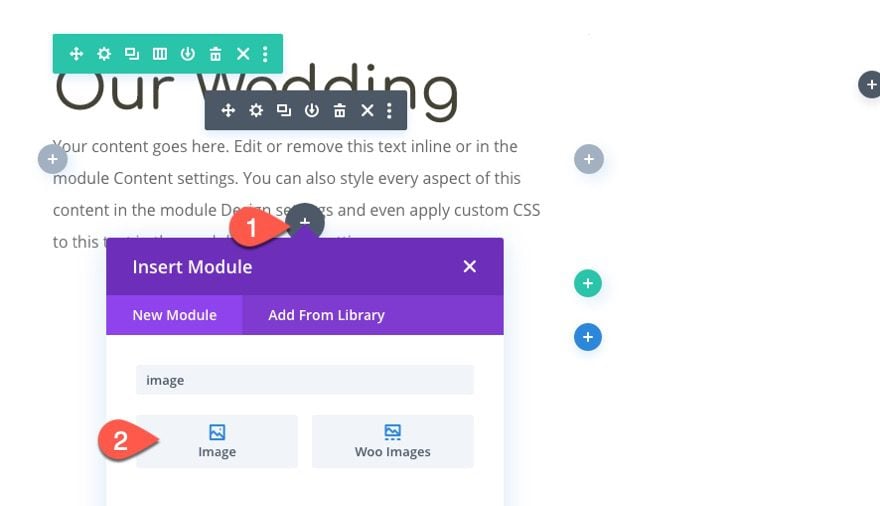 Then upload the image. 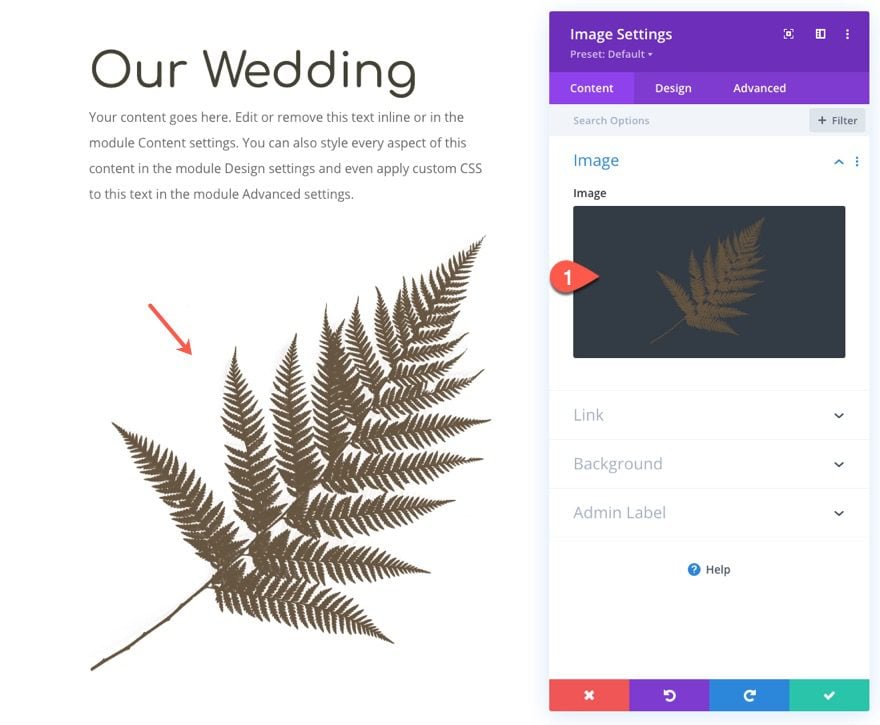 Under the design tab, bring down the opacity of the image using the filter settings. 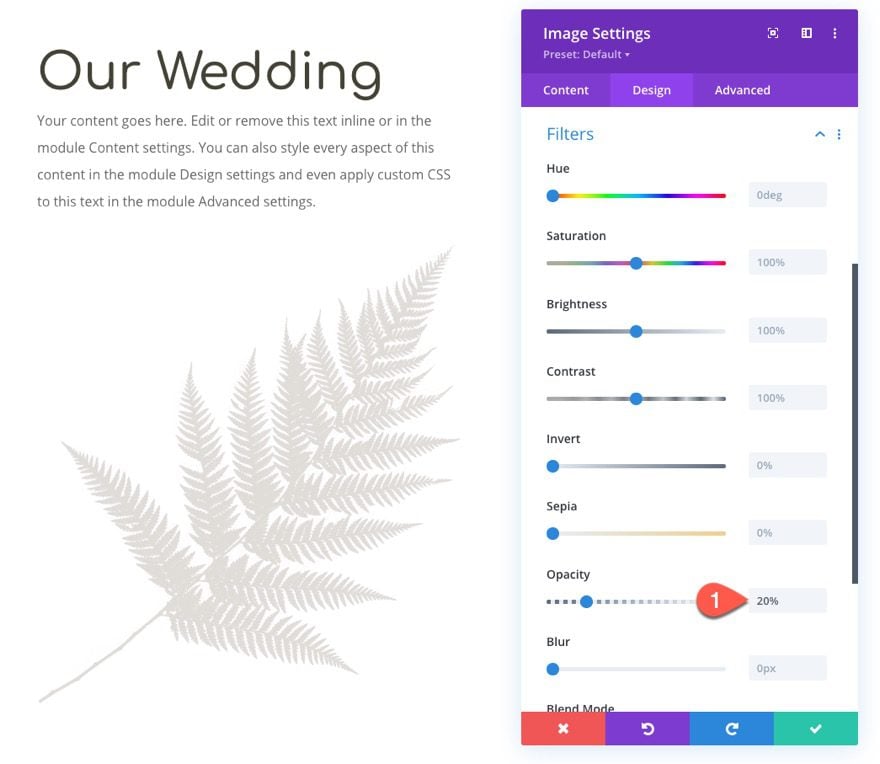 Next, move the image over to the left and upward using the following transform option: 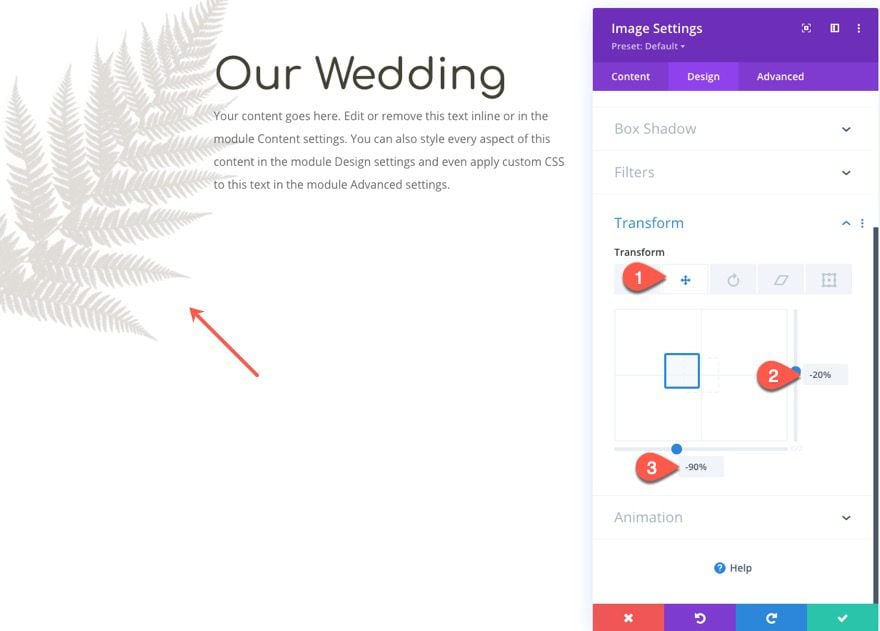 Then give the image an absolute position. 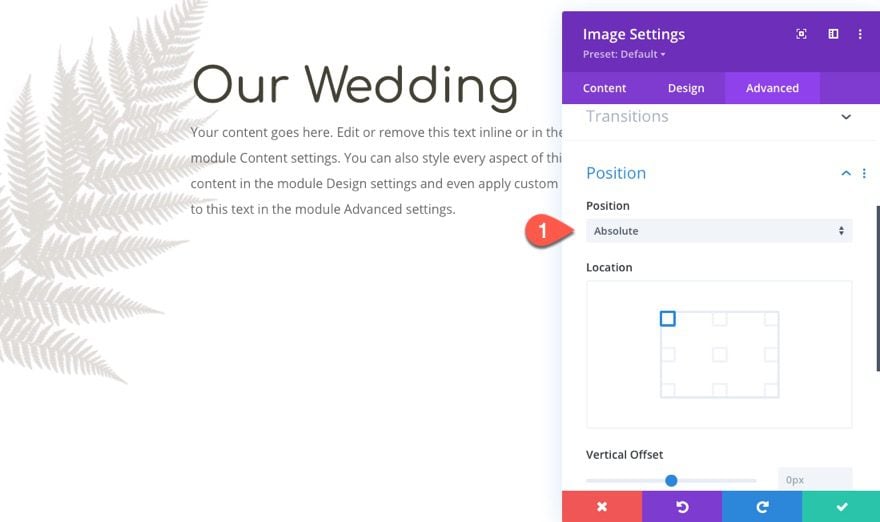 Once the mock content in the left column are finished, we are ready to start creating the image and those moving image shadows.

Add a new image module to the right column.

Then upload an image that is at least 800px wide. Since we are going to be adding a moving image shadow of a tree branch, it makes sense to use a picture of somewhere outside. 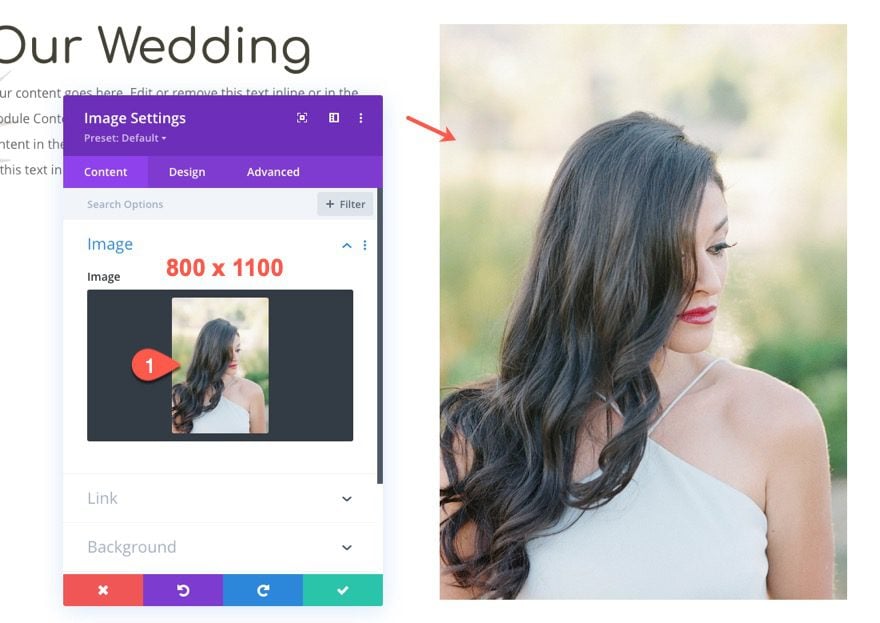 Then take out the default bottom margin under the module as follows: 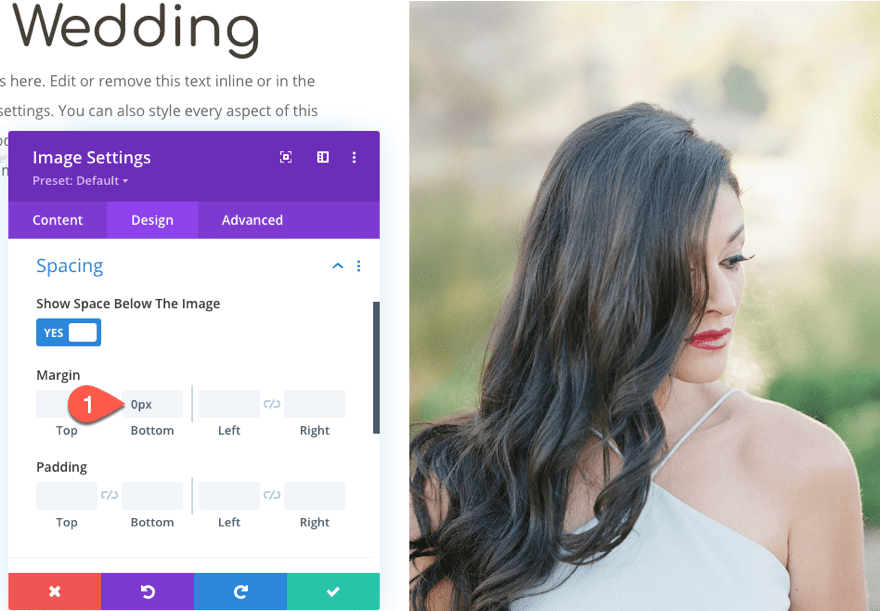 Now we are ready to create the first moving image shadow. The basic idea is to use an image in the PNG file format so that the transparent background of the image will not show. Then we will use the filter effects to adjust the brightness, opacity, and blur to transform the image to look like a shadow. Because the PNG image has a unique shape, the shadow will also keep the same shape.

Let’s start by adding the same PNG image of a branch from the Holistic Healer Layout Pack. 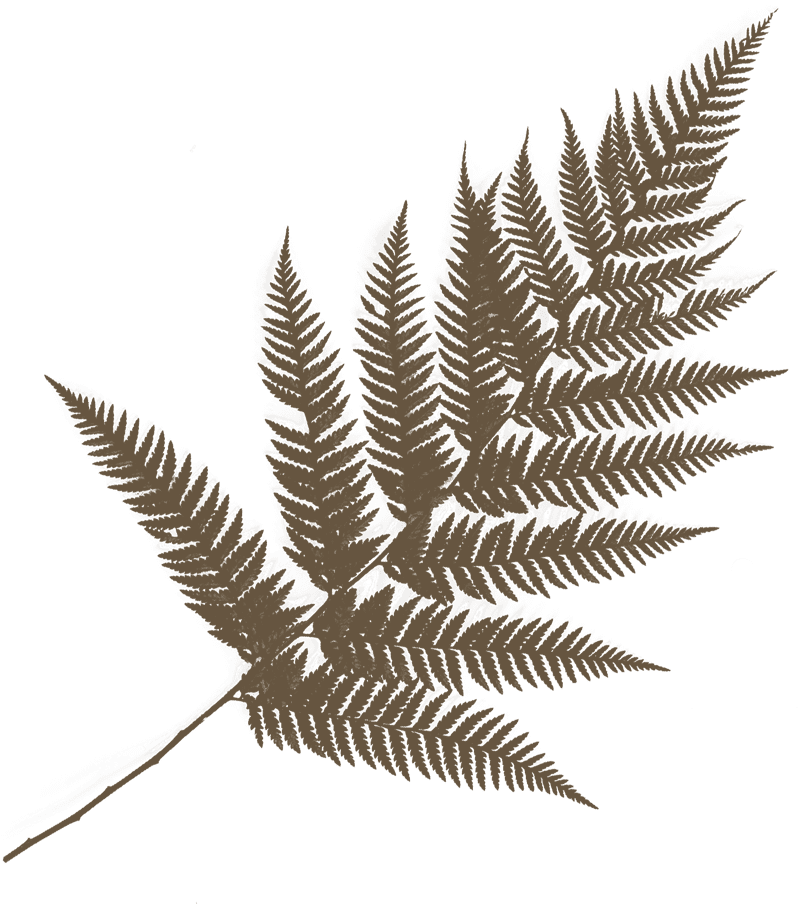 Add the image module under the image in the right column. 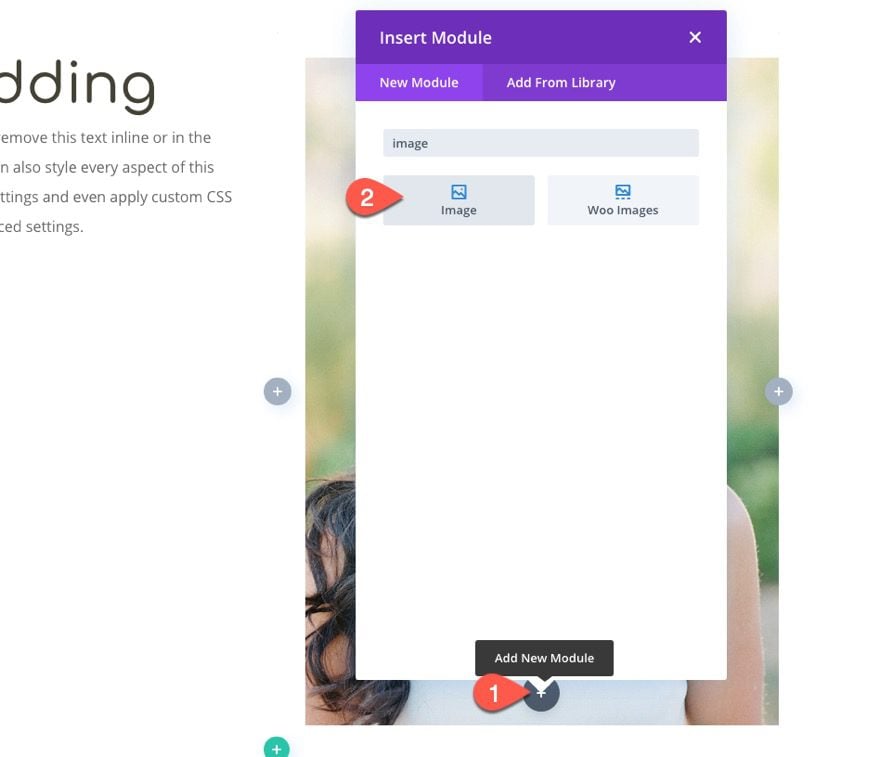 Then upload the image to the module. 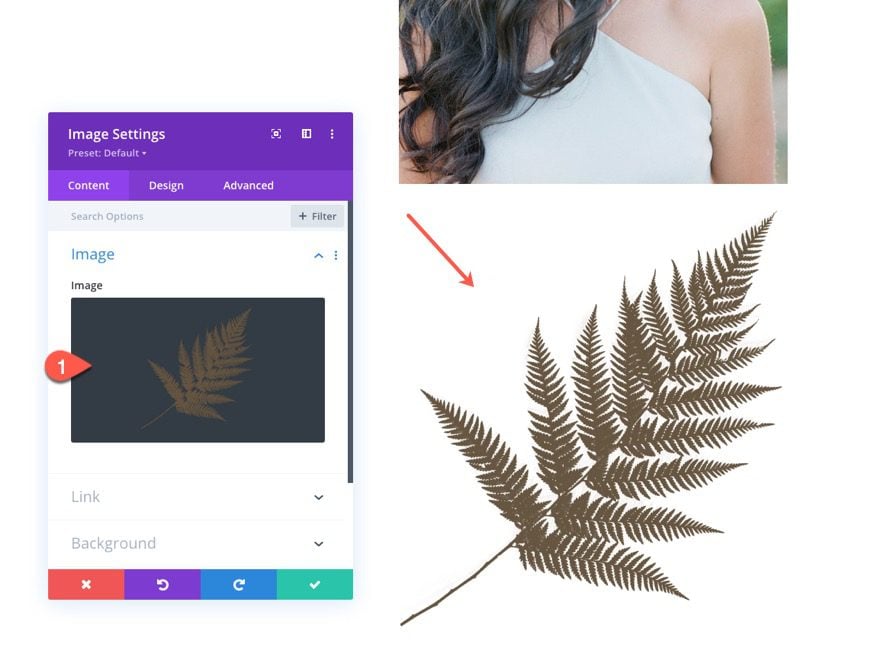 Under the design tab, update the filters to make the image look like a shadow. 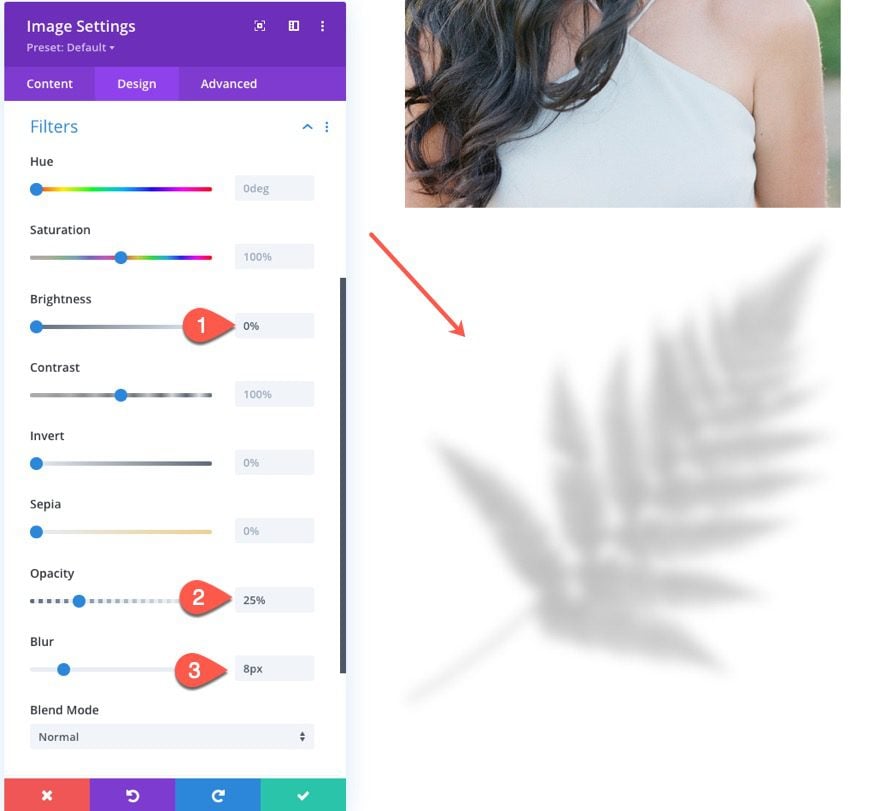 Then give the image shadow an absolute position so that it sits above the main image above. 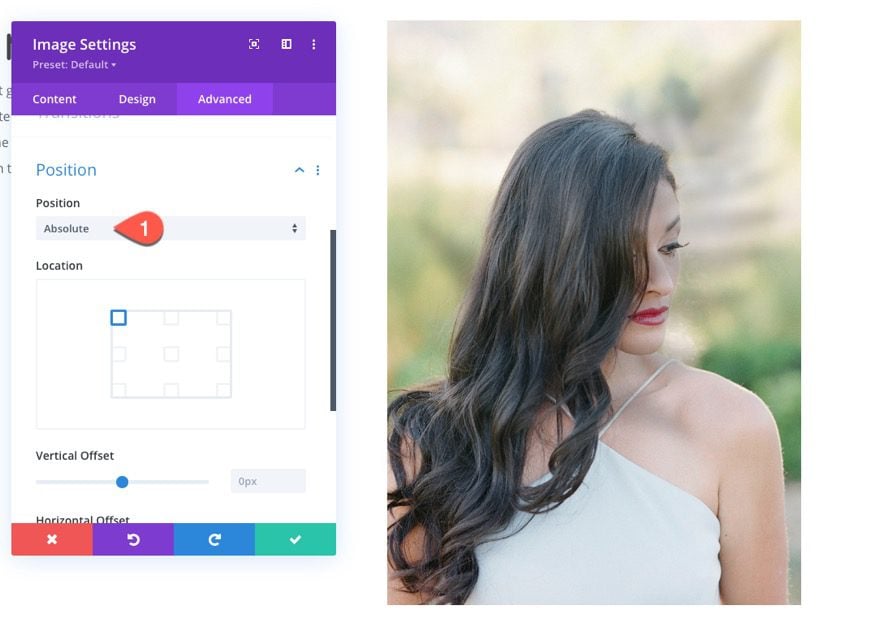 To move the image shadow, update the following scroll effects.

(NOTE: This will enlarge the shadow to 160% and keep it there throughout the entire scrolling effect. But feel free to adjust the scale percentages at different points.) 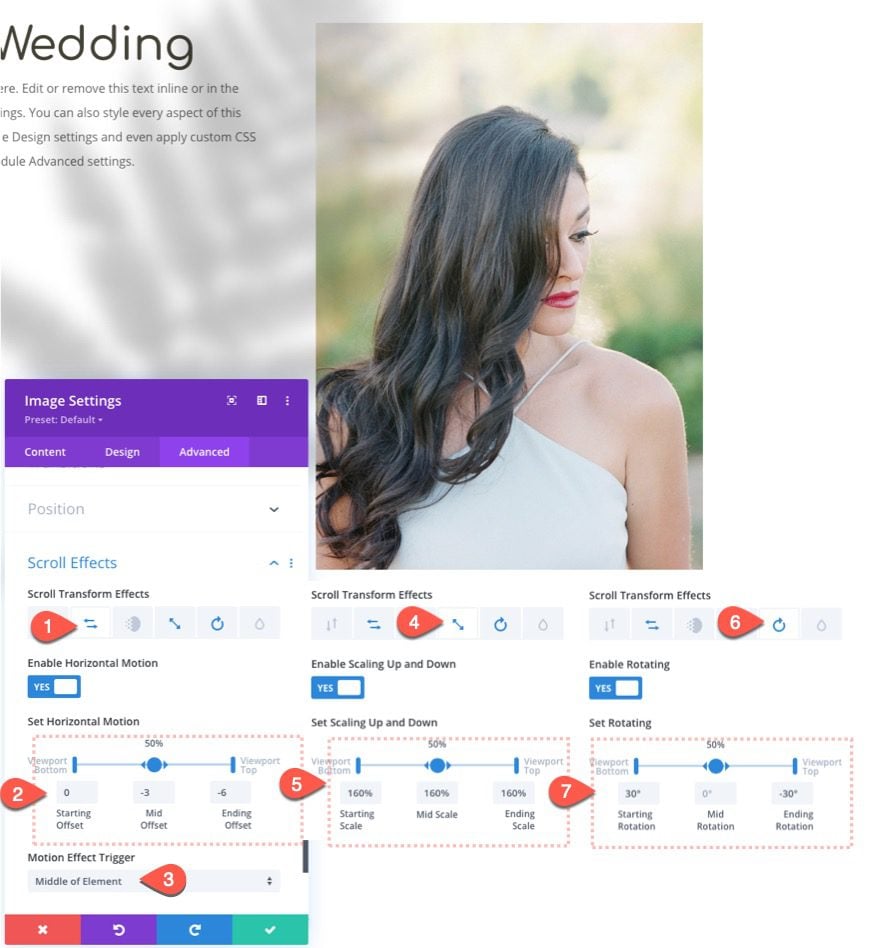 Checking the Result So Far

At this point, we can view the result so far by adding the following margin to the section temporarily so that we can scroll down the live page. 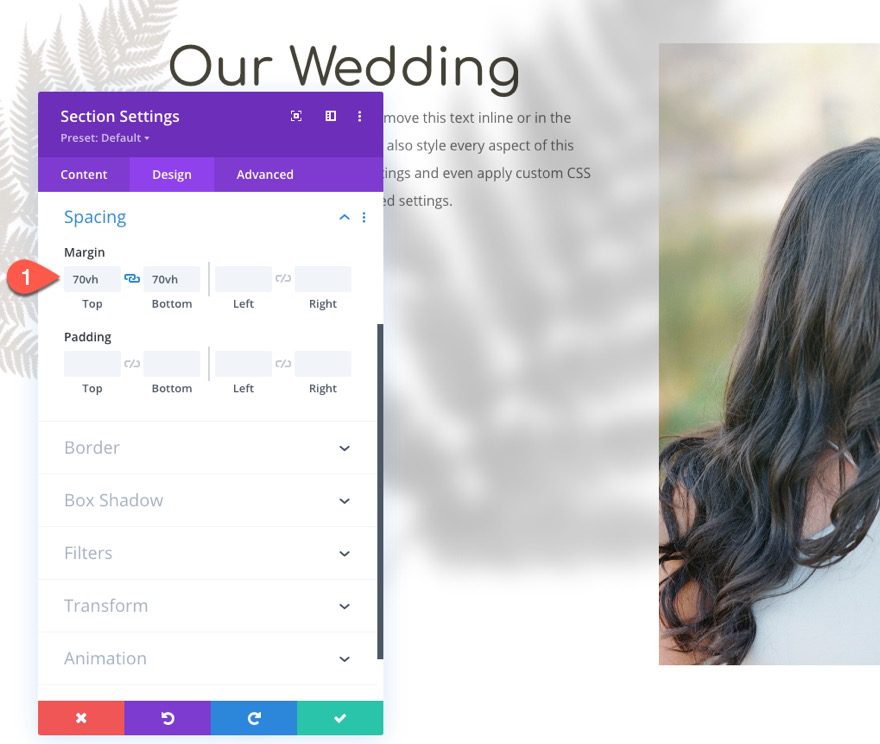 Here is what the effect looks like so far.

In order to contain the image shadow within the same column of the main image, open the settings for column 2, and update the overflow options as follows: 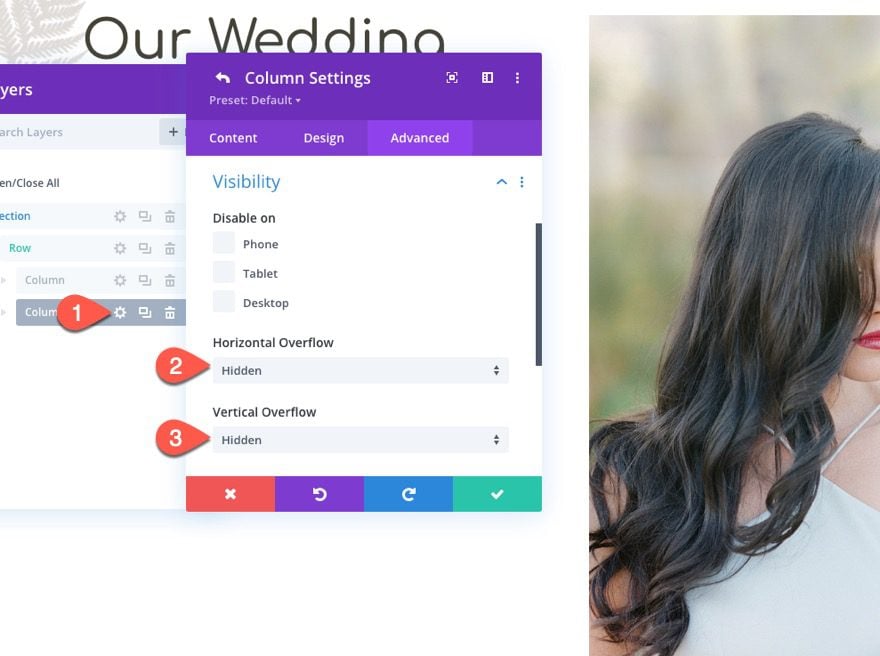 Now check out the result.

Once we have our first image shadow in place, it is easy to create another one. All we need to do is duplicate the existing image shadow and update the scroll effects. The dual moving image shadows will create a beautiful unveiling effect to the image. 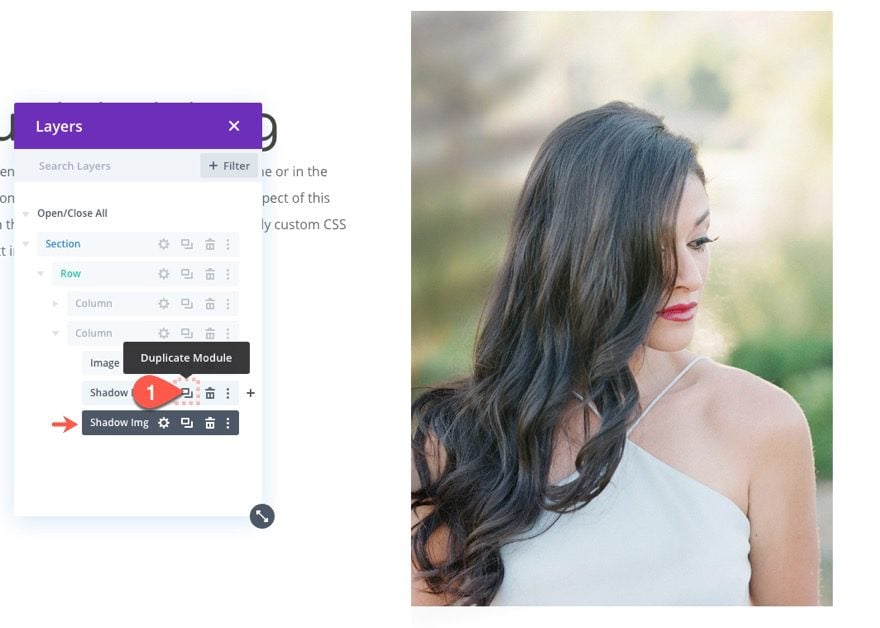 Then open the settings for the duplicate and update the scroll effects as follows: 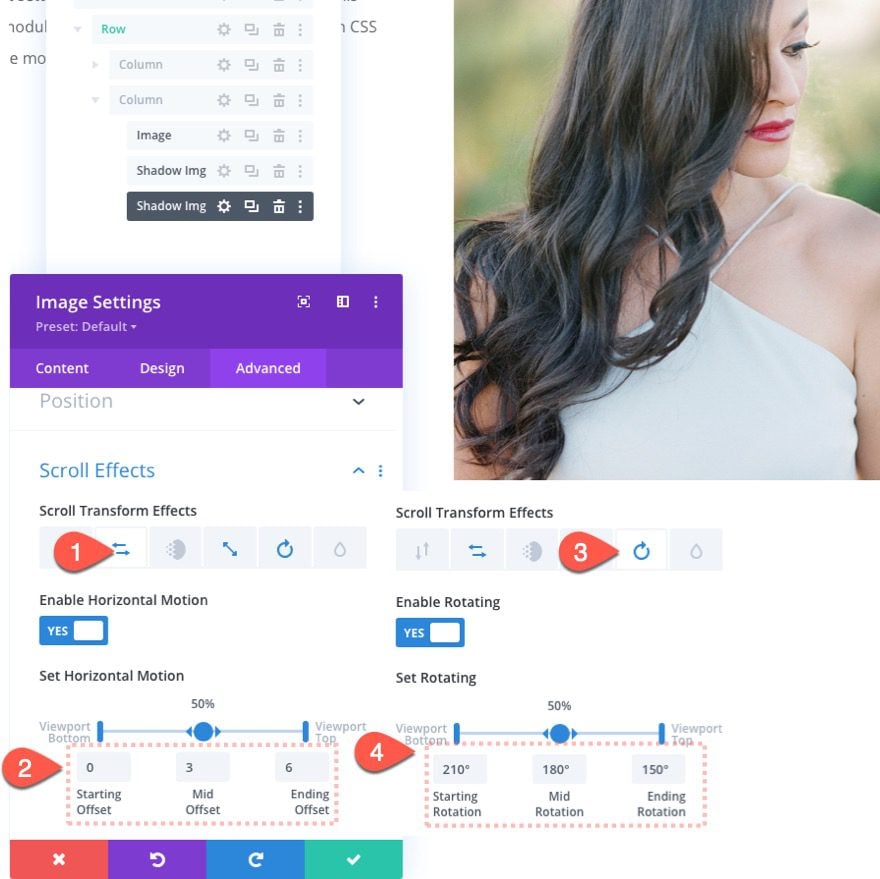 Here is the result…

Adding a Zoom-In Effect to the Main Image

Because the column overflow is hidden, we can scale the main image on scroll to create a subtle zoom-in (or ken burns effect) that will complement the moving image shadows.

To do this, open the settings for the main image and update the following:

This will create a zoom-in effect as the user scrolls. 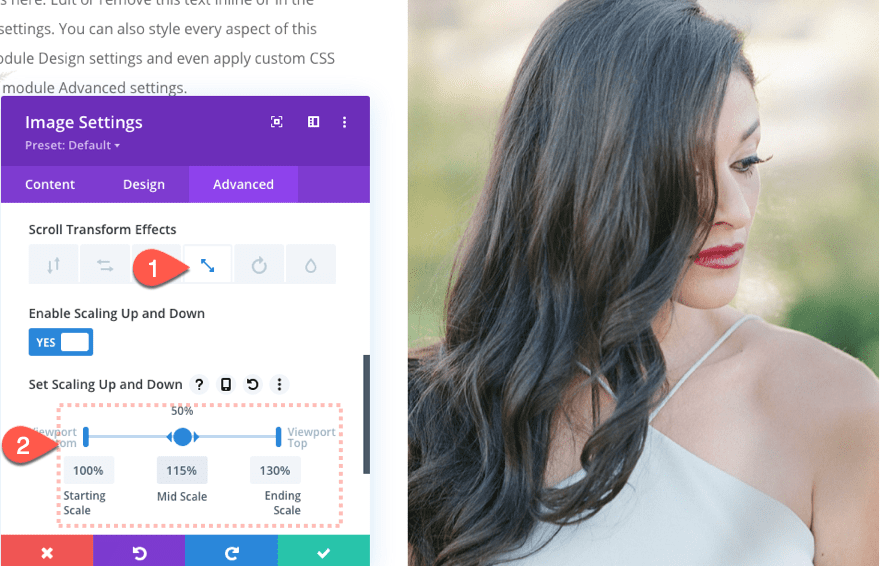 And here is the final result.

I hope these moving image shadows were as fun to build for you as they were for me. It is a simple, yet stunning design element that has the potential for even more creative additions. Feel free to explore adding different colors, blend modes, and other scroll effects to make the design your own.

Jason started a career in education before co-founding a web agency specializing in Divi websites. Now he works full time as a content creator for Elegant Themes where he enjoys contributing blog posts, tutorials and documentation about all things Divi. 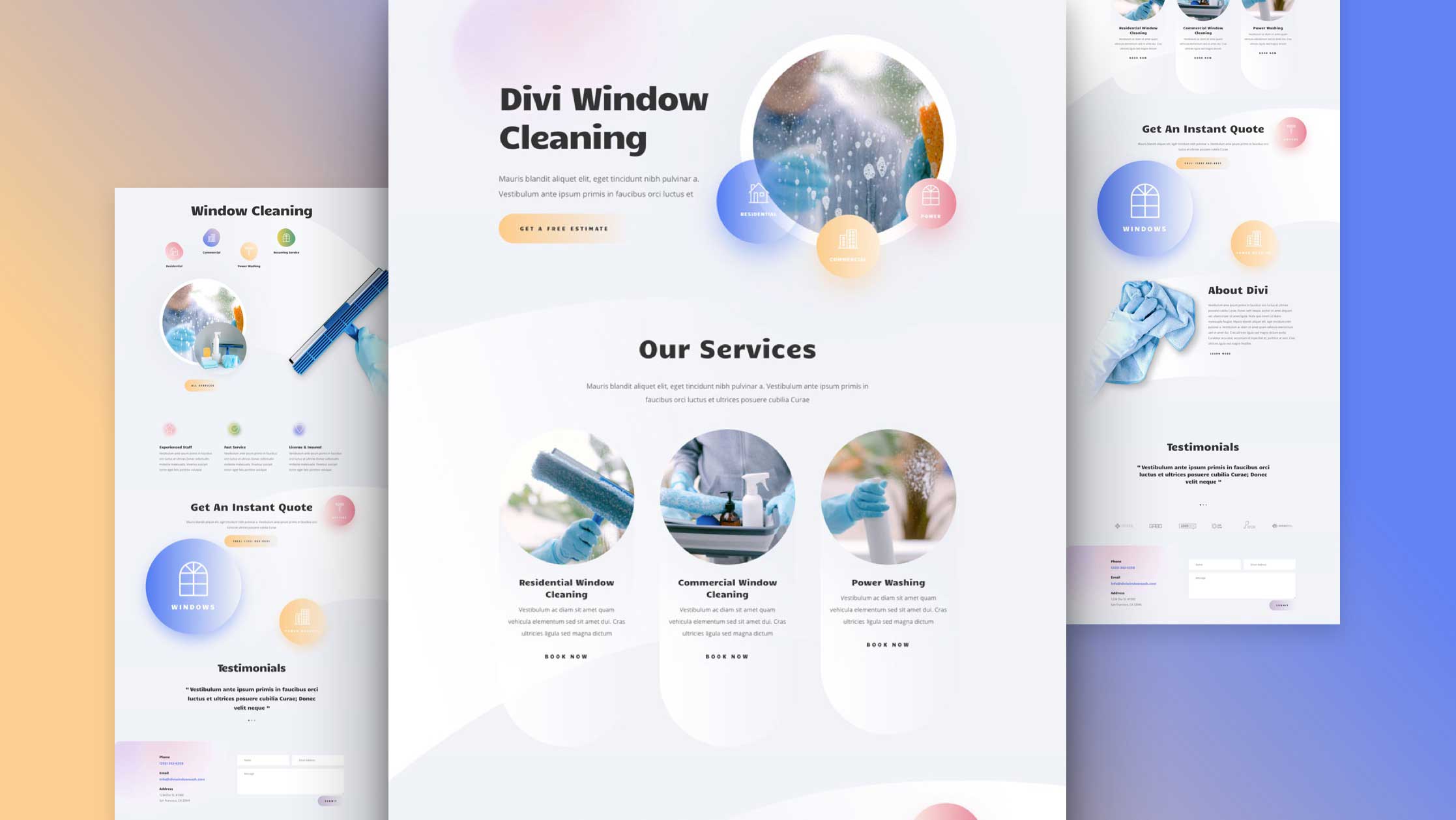 Get a FREE Window Cleaning Layout Pack for Divi

Posted on September 28, 2020 by Jason Champagne in Divi Resources

Hey Divi Nation! Thanks for joining us for the next installment of our weekly Divi Design Initiative; where each week, we give away a brand new, free Divi Layout Pack from our design team to you. For this week, Kenny and his team have created a beautifully polished Window Cleaning Layout Pack. This... 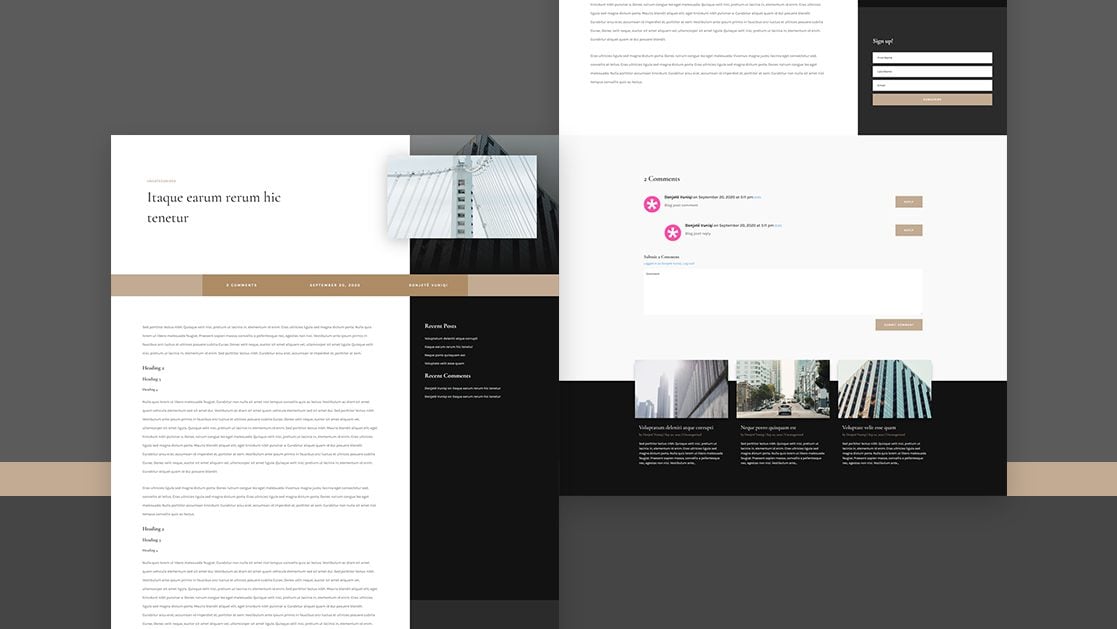 Hey Divi Nation! Thanks for joining us for the next installment of our weekly Divi Design Initiative where each week, we give away brand new freebies. In the past, we shared the beautiful Architecture Firm Layout Pack. To help you get your website up and running as soon as possible, we’re... 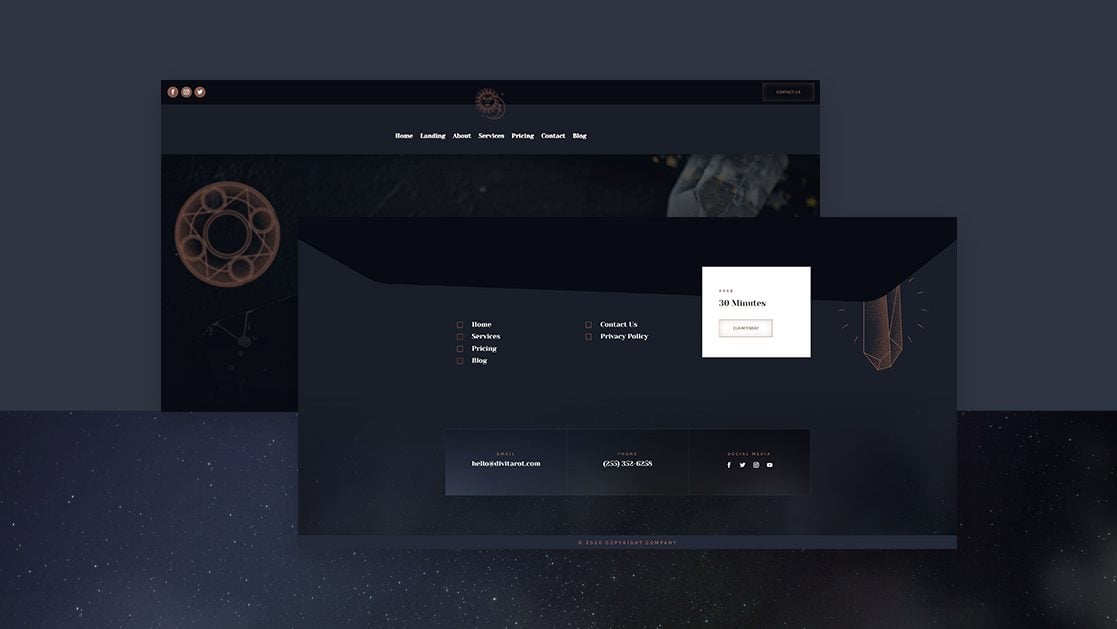 Hey Divi Nation! Thanks for joining us for the next installment of our weekly Divi Design Initiative where each week, we give away brand new freebies. Recently, we shared a brand new Tarot Layout Pack. To help you get your website up and running as soon as possible, we’re sharing a global...