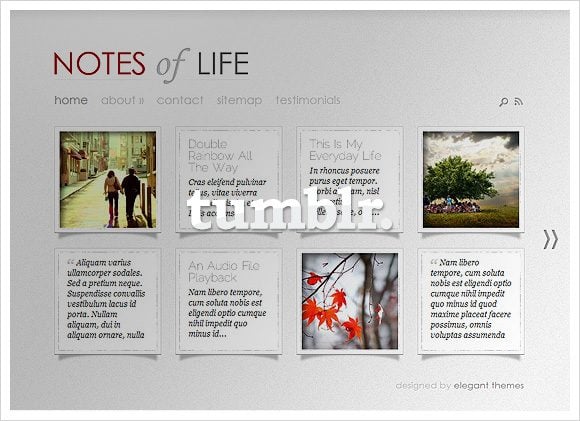 Considering the fact that we are already making “tumblr style” WordPress themes, I decided that it would be a great idea to port these themes over to tumblr as a bonus for our users. DailyNotes is the first design to be translated, and in the future we will be porting all of our tumblrish designs over to the tumblr platform. Be sure to check out the Live Demo and let me know what you think.

You can download the new theme from within the member’s area. I hope some of you will put it to good use 🙂

Serene is a truly beautiful blogging theme with post format support. Now you can easily display a dynamic feed of articles, videos, audio files, quotes, galleries and links in the most elegant way possible. It’s also our first completely free theme made for everyone to enjoy! The...

The View Is Beautiful From The Vertex

Vertex is a stunning theme built for service providers that want to showcase their equally stunning products. The climb down from the Vertex is long, but as you descend you are met with beautifully animated content that is built for scrolling. The homepages gives you a chance to engage your...

Once Upon A Time, There Was Beautiful Theme Named Fable

Put simply, Fable is beautiful theme built for blogging. The theme tells a story by layering a visual narrative through post variation. Fable is built for easy reading. Its spacious, full-width, and long-format style makes scrolling a pleasurable journey. Each post type is displayed boldly,...